Industrial PCs are a PC-based computing platform used in various industrial applications. Industrial PCs are especially designed to withstand harsh exterior environments (extremes of temperature, dust, humidity, vibration, power surges) that commercial PCs are not designed for. Industrial PCs are also more flexible as compared to normal PCs, as they support legacy applications that need to work flawlessly for 5 or even 10 and more years. This is because the components used for the manufacturing of industrial PCs are industrial grade rather than commercial grade. These are longer lasting and built to a higher standard. They have longer supported life durations and aren’t substituted by newer versions as often as commercial components. This provides higher consistency of supply and long-term repeatability so the same model can be available for much longer than the commercial equivalent. 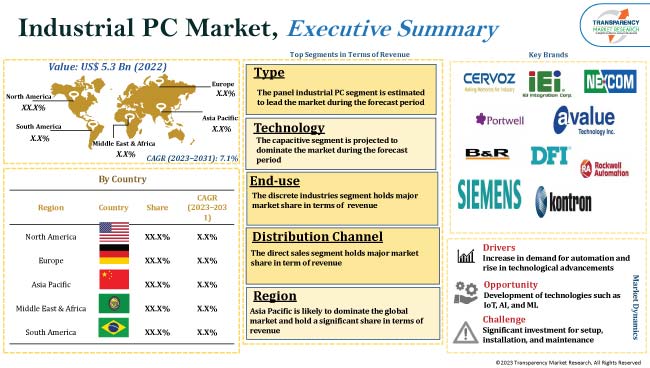 The global industrial PC market has witnessed traction across a number of sectors due to the high demand for robust PCs that can withstand severe environmental conditions. The leading applications of industrial PCs lie in communication and network infrastructure, digital signage, digital security and surveillance, energy and power, gaming, industrial automation and control, instrumentation/test automation, medical, aerospace and defense, retail automation, transportation, and others. The aerospace and defense industry requires industrial PCs capable of working at extreme temperatures (-20 degree Celsius to +65 degree Celsius) and extreme humidity levels (5% to 95%), and capable of withstanding corrosion, shocks, and heavy dust. The superior rugged design, combined with the best industrial-grade components, offers high reliability and long-term performance. This factor is expected to boost the market for Industrial PC over the forecast period.

However, Asia Pacific is expected to be an important market for industrial PCs market players in the coming years and is expected to exhibit a robust CAGR of 14.4% in the 2017-2025 forecast period. The valuation of the Asia Pacific market is likely to rise to US$2,777.4 mn by 2025, enabling steady dominance of the regional market in the coming years. In the Middle East and Africa, the UAE and Saudi Arabia cumulatively contributed around 57% of revenue in 2016 and are expected to hold the largest share in the Middle East and Africa industrial PC market in the forecast period.

Industrial PC is a ruggedized system designed to perform computing applications for various industries. Industrial PC is a PC-based computing podium mainly used for data acquisition or process control, and in some cases, it is simply used as a face off to another control computer placed in a separate processing environment. Industrial PC are precisely designed to survive typically severe environmental conditions. They have a flexible design to control, activate, and observe systems and machines on the plant floor. They provide a controlled environment for the installed electronics such that it is able to survive the typically rigorous conditions of the plant floor of any industry for a longer lifecycle. The emergence of Industry 4.0 and rising adoption of internet services and increased focus on efficiency and production cost play a significant role in the growth of the IoT market, which is favoring the specially designed industrial PCs market is driving the demand for industrial PCs globally are the major forces that drives the global industrial PC market.

The Industrial PC market is segmented as below: