Immersion oils are pellucid oils that have specific optical and viscosity characteristics compatible for usage in microscopy. Immersion oils have a refractive index closer to that of glass, and they do not refract the beams of light being focused on the item being examined. Consequently, all light beams are focused onto the object to be examined, as opposed to light beams going through air and being scattered, thus hampering the quality of the analysis. Using immersion oils results in higher brightness at high magnification and high image resolution. The global immersion oil market is expected to expand at a significant rate driven by increase in demand for innovation in the field of science. The immersion oil market was valued at about US$ 55 Mn in 2016 and is projected to expand at a CAGR of more than 5% during the forecast period. 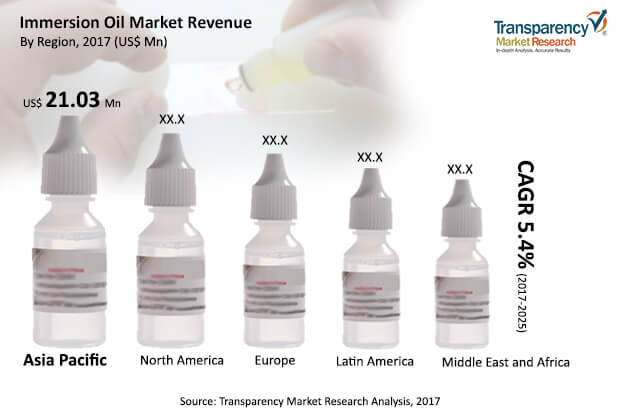 Major players operating in the immersion oil market have adopted mergers and acquisitions as their key strategy to expand their network and boost their investments. For instance, in 2016, Honeywell International Inc. acquired Xtralis, a leading company that operates in the field of early fire and intrusion detection technologies. The acquisition fits perfectly with Honeywell's technology innovation and leadership and helped expand its product portfolio. Launching new products and facilities is likely to be the long-term strategy of immersion oil manufacturers. For example, Cargille Laboratories, Inc. launched a whole new series of Cargille Meltmount for microscopy and optical coupling. These are specially formulated for optical-quality thermoplastics for usage in microscope slide mounting and in other optical coupling applications. The company developed its new line of Sub-Lux Gels, which are profoundly black gels and are designed to eliminate back reflection when paired with glasses of similar refractive index. Flinn Scientific Inc. launched Flinn Advanced Compound Microscopes that deliver high-quality optics, which is considered the best for advanced biological science courses and includes easy-to-use software. Thermo Fisher Scientific developed the Thermo Scientific Richard-Allan Scientific Resolve Immersion Oil that contains no PCBs. It is a clear, colorless oil that allows light transmission throughout most of the UV-VIS spectrum

Immersion oil is utilized in optical microscopes in order to obtain a clear picture of the object. A few decades ago, paraffin oil was mostly used in optical microscopes; however, this oil has various drawbacks, such as it hardens with time, it turns yellow with age, which is not desirable for usage in microscopes. The surface of the microscopic glass has to be clean and clear for accurate observations. Subsequently, after various trials, paraffin oil was replaced by cedar wood oils, which offered a clear image and has a long-term effect than paraffin oil. Cedar wood oil is made of wood, roots, and stumps, which are leftovers of felled trees of timber. However, after a period of time, the usage of cedar wood also resulted in the same drawback. This led to cedar wood oil being replaced by synthetic oil, which offered various advantages over other oils. It does not turn yellow with age and is also temperature resistant, which is highly useful for elevated temperatures. Castor oil has also been gaining popularity for microscopic use in recent years, as it offers various advantages over other oils.

Oil Immersion refers to the process that is being used to boost microscope's resolving power. It is accomplished by immersing a sample with a high refractive index and the microscope device's objective lens in clear oil. In turn, this will increase the numerical aperture of the microscope's objective lens. In addition, these oils are transparent in nature that also come with unique viscosity and optical properties that make them well suited for use in various microscopy applications. This factor is likely to foster expansion of the global immersion oil market in the years to come.

Immersion oils come with a refractive index comparable to that of glass, and the rays of light centered on the object being studied are not refracted. And hence, contrary to beams of light traveling through the air and then being distributed, all light beams are concentrated on the object to be analyzed, thus hampering the accuracy of the findings. At high image resolution and high magnification, the utilization of immersion oils leads to greater luminosity, thereby working in favor of the global immersion oil market in near future.

Pharmaceutical manufacturers and academic or research institutions have been using the product commercially. In the coming years, burgeoning research activities in the areas of biotechnology are likely to promote demand for the product. The product's high refractive index aims to promote the resolution of the microscope by diminishing the air gap between the cover glass and contact lens. Such multiple uses of the product are expected to benefit the global immersion oil market in the forthcoming years.

The report comprises a detailed value chain analysis, which provides a comprehensive view of the global immersion oil market. The Porter’s Five Forces model for the immersion oil market has also been included to help understand the competitive landscape in the market. The study encompasses market attractiveness analysis, wherein applications are benchmarked based on their market size, growth rate, and general attractiveness.