Revenues of the global hot dogs and sausages market were nearly US$64.7 bn in 2014 and are estimated to reach US$80.4 bn by 2021. The market is projected to register a 3.1% CAGR during the forecast period, reports Transparency Market Research.

Hot dogs and sausages are made from a variety of meats: pork, beef, chicken, mutton, and lamb. Among these, although pork led the overall market, chicken is identified as the most attractive segment for the hot dogs and sausages market due to growing health awareness among consumers. There has been a global shift in consumer preference from red meat to chicken since the cholesterol content in red meat is higher than that in chicken. Furthermore, chicken does not contain trans fat, which is one of the main factors triggering coronary heart diseases. This is expected to increase the demand for chicken hot dogs and sausages during the forecast period.

Additionally, chicken is comparatively cheaper and there are negligible religious barriers or taboos associated with its consumption. This is as an important factor in the growth of the chicken hot dogs and sausages market, especially in the Middle East. On the other hand, pork is an attractive segment in the hot dogs and sausages market in Asia Pacific, especially in China. 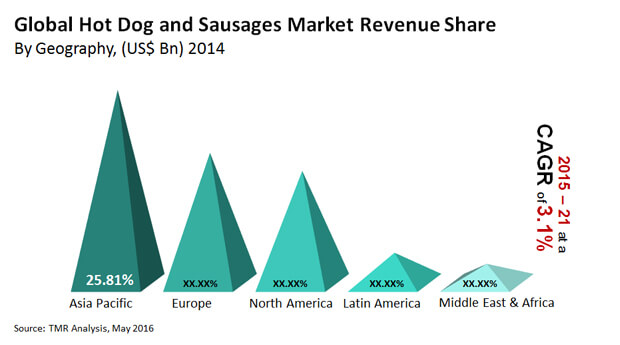 Demand for Hot Dogs and Sausages on the Rise in MEA

The global hot dogs and sausages market has been geographically segmented into North America, Europe, Asia Pacific, the Middle East and Africa (MEA), and Latin America.

The Asia Pacific hot dogs and sausages market is fueled by the rising preference for fast food among the younger generation in the developing economies of China and India. One of the major factors contributing to this factor is the increasing number of individuals belonging to the age group of 20-30.

The hot dogs and sausages market in the Middle East and Africa is anticipated to witness significant growth during the forecast period due to the increasingly busy lifestyles of the working class, the growing frequency of major sporting events, and an increasing number of households with kids. In addition, extensive marketing strategies adopted by hot dogs and sausages manufacturing companies are slated to fuel the market in this region over the course of the forecast period.

Hot dogs and sausages have come to be representative of American and European food cultures respectively. Over the years, they have become increasingly available in different varieties in several countries around the world, attracting both vegan and meat lovers. The continual efforts of food service companies in expanding their distribution chains in the developing world has propelled sales avenues in the hot dogs and sausages market. A conscious shift of shift from red meat to chicken and turkey has shaped the recent demand dynamics of the market in various key geographies. Considered as a food with high fat content, hot dogs and sausages have undergone rapid transformation in the nutritional profile and the combination of meat, seasonings, preservatives, and use of fillers. One particularly interesting trend has been growing production of seafood sausages and those containing meat alternatives. The initiative has also helped the Hot dogs and sausages market to see new consumer demands and expand its reach to a largely vegan population. Variations in sausage casing have also been one of the major lines of product varieties for consumers. The array of garnishes have also expanded, thereby giving consumer more options. Strides being made by convenience foods are one of the major trends behind the growing valuation of the hot dogs and sausages market.

The post-pandemic world is characterized by rapid penetration of digital systems and automation technologies in various industries. Food manufacturing and services industries are no alien to the repercussions of the COVID-19 pandemic. Growing trends in food banks and changing psychographic factors in some of the major economies of the world have reshaped he contours of the hot dogs and sausages market. Key players in the value chain were quick to migrate to new distribution networks to meet a large cross-section of consumer demands of the postpandemic world. Intensifying need for nutritious meals has also stimulated advancements in food production technologies. Brands have also been making changes in their positioning strategies in sync with this.

By geography, the market has been segmented into North America, Europe, Asia Pacific, the Middle East and Africa and Latin America. This report helps distributors, suppliers and manufacturers to formulate strategies based on understanding of the trends in this market. Among the overall meat type segment, chicken is analyzed to be the most attractive segment for the hot dogs and sausages market due to increasing health awareness among consumers. Globally, consumers are shifting from the consumption of red meat to chicken, as cholesterol content of red meat is high compared to chicken. Increasing number of household with kids, high popularity of sausages and hot dogs among the younger generation, and rising demand for organic food products, among others, are the major factors driving the global hot dogs and sausages market.