Hexane is primarily used to extract edible oil from seeds and vegetables. The colorless and flavorless nature coupled with favorable properties, such as low viscosity and volatility has made hexane an ideal choice of solvent for a range of applications, including chemical organic synthesis, oil extraction, polymerization, pharmaceutical, and industrial cleaning & degreasing, among others. N-hexane, which is also known as an oil solvent is used across a range of industries, including printing, rubber, leather, cosmetics, ink, etc. In recent times, n-hexane is increasingly being used in the medical field and integrated circuit (IC) electronic unit cleaning.

Asia Pacific is expected to account for over 50% share of the hexane market by the end of 2027. The hexane market in Asia Pacific is projected to grow at a CAGR of ~4% during the forecast period (2019-2027). The rapid growth of the food & beverages sector and staggering demand for industrial-grade hexane in countries, including India, China, Indonesia, and Thailand are some of the primary factors that are strengthening the growth of the hexane market in the Asia Pacific region. At present, governments across the world are enforcing stringent regulations on the use of hexane to improve workforce safety and minimize casualties in industrial facilities. 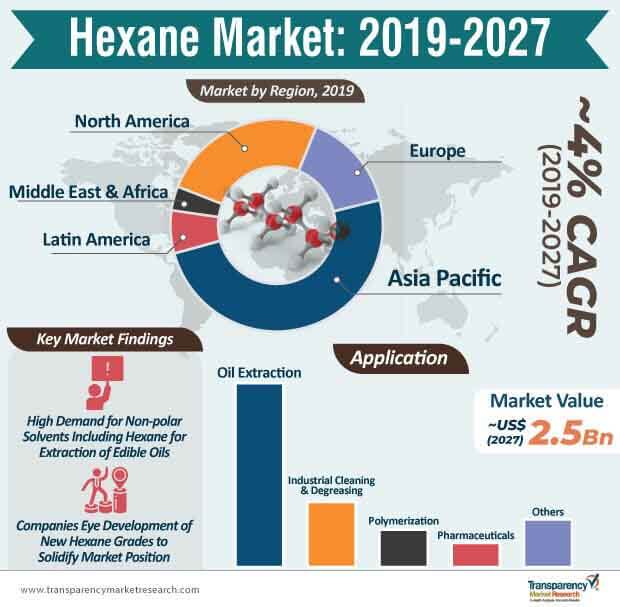 Adoption of Hexane for Carotenoid Extraction to Drive Hexane Market

Traditionally, non-polar organic solvents such as petroleum ether, tetrahydrofuran (THF), and hexane are used to extract non-polar carotenes. The choice of the solvent is one of the most crucial factors that determine the efficiency of the extraction process. Despite the growing adoption of hexane to extract non-polar carotenes, a mixture of ethanol/acetone/hexane is increasingly being used to simultaneously extract non-polar and polar carotenoids. A high carotenoid yield is obtained when ~45% hexane is used in the solvent mixture, wherein the solvent to waste ratio is 9:1:1. Despite the increasing adoption of hexane in carotenoid extraction, chloroform and methanol (2:1) mixture has exhibited greater efficiency during the extraction of carotenoids. However, applications of chloroform are largely restricted due to health and environmental safety concerns.

The Toxin Substances Control Act (TSCA) was formulated in 1976 to ensure that the safety of the chemicals throughout their lifecycle - manufacturing stage to its use and disposal. However, due to the loopholes in this law, the Environmental Protection Agency (EPA) could not provide the required solutions pertaining to the potential health dangers of hexane. Directions or instructions from the EPA are required to minimize exposure from different toxic chemicals, including hexane that is commonly used in a range of industrial applications and household products, such as paints, adhesives, stain removers, etc.

Despite the growing demand for hexane as an industrial cleaner, health dangers that come along with it, including nerve damage to arms, hands, legs, and feet have compelled end users to adopt other alternatives such as water-based cleaners. For instance, end users are exploring the possibilities of using water-based cleaners as a substitute for hexane in the auto repair sector and various other industries wherein precision cleaning is critical. Water-based cleaners are gradually emerging as one of the safest alternatives in a range of consumer products. Within the printing industry, hexane could be replaced by plant and vegetable-based cleaners. The advent of these safer and effective alternatives could hamper the growth of the hexane market during the forecast period.

Companies operating in the global hexane market are expected to focus on expanding their product portfolio to gain a competitive edge in the highly competitive hexane market landscape. For instance, in November 2018, BPCL Kochi Refinery launched the food-grade quality hexane that is expected to boost the prospects of the food processing industry in India. Further, the company announced that the newly developed product will be primarily used for the extraction application. Moreover, active players in the hexane market are likely to gain market share by leaning toward research and development activities and diversifying their product range. 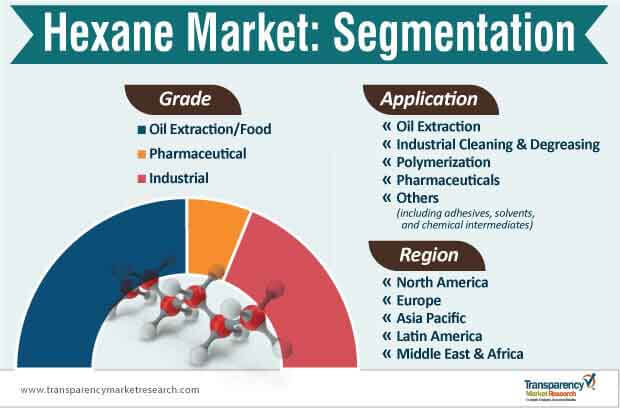 Looking for Regional Analysis or Competitive Landscape in Hexane Market, ask for a customized report

Hexane Market – Scope of the Report

Key indicators of market growth, which include value chain analysis as well as supply chain analysis and compounded annual growth rate (CAGR), are elucidated in TMR’s study in a comprehensive manner. This data can help readers interpret quantitative growth aspects of the hexane market during the forecast period.

This study also discusses the underlying trends and the impact of various factors that are driving the hexane market, along with their influence on the evolution of the market.

This report answers these questions about the hexane market, aiding major stakeholders and key players in making correct decisions and strategizing for growth of their business.

This TMR report on the hexane market is based on a complete and comprehensive evaluation of the market, supported by secondary and primary sources. The competition scenario of the hexane market is supported by an assessment of different factors that influence the market on a minute and granular level. By thoroughly analyzing the historical data and current trends, researchers of the market have arrived at predictions and estimations and calculated the market forecast.

This report uses an analytical triangulation method to estimate the numbers of the hexane market with both bottom-up and top-down approaches.

This detailed assessment of the hexane market, along with an overview of the competition landscape, has been provided based on a careful examination of growth avenues related to the market. Analysts’ conclusions on how the hexane market is expected to expand are based on carefully vetted primary and secondary sources.

TMR’s study on hexane market segments the market based on grade, application, and region. Changing market trends and other crucial market dynamics associated with these segments of the hexane market have been discussed in detail.