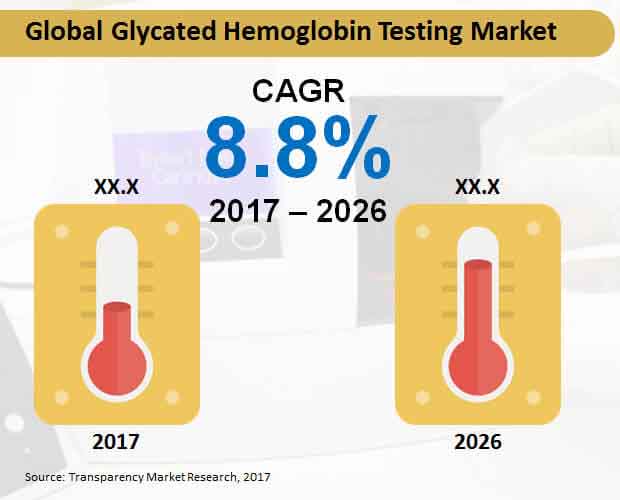 Increasing Uptake for Laboratory Based Tests

The rising incidence of diabetes and arbitrary insulin spiking across several population groups is a matter of concern for the masses. Besides, the direct association of diabetes with several other diseases has further elevated the concerns of the masses. In addition to this, diabetes can also be a cause of trigger for several other diseases. Henceforth, the global glycated haemoglobin testing market is predicted to capture fresh revenues in the times to follow. The next decade is foreseen be a phase of revenue generation across the glycated haemoglobin testing market.

The aforementioned projections can be attributed to the outbreak of the novel coronavirus. After completing a year of the pandemic experience, the medical industry has found out several key inferences and conclusions related to the virus. The occurrence of the coronavirus in people suffering from diabetes can be a cause of severity for the suffering individuals. Over the course of the next decade, the glycated haemoglobin testing market is projected to attract fresh pathways for growth. The presence of several important research entities is also changing the dynamics of growth across the glycated haemoglobin testing market.

Key Features of the Report

Scope of the Study

Our team of research consultants, analysts and subject matter experts have created a systematic approach in primary and secondary research methodologies. Different levels of analysis have been employed, and a reliable process in forecasting the global market size estimations have been used in the development of this report. The report serves as a credible business document for companies participating the global glycated hemoglobin testing market. The study provides inferences which can be used by market players towards development of new business strategies. Moreover, the study has the potential to improve the existing undertakings of market players by reveal the most-lucrative as well as the least-lucrative market segments.

The report covers a competition analysis which helps the client to track the happenings of key competitors. Concerns of stakeholders and suppliers have also been conveyed through the study. The global market for glycated hemoglobin testing has been analyzed and forecasted on the basis of metrics such as compounded annual growth rates (CAGRs), Year-on-Year (Y-o-Y) growth rate, absolute dollar opportunities, and Basis Point Share index, among others. In addition, market size estimations in the report are represent in US dollars (US$) to capture the global understanding. The key scope of this study is deliver a profoundly-researched forecast and analysis on the global market for glycated hemoglobin testing, and generating key presumptive scenarios for helping companies attain impressive business growth in the long run.

The segmentation of the global glycated hemoglobin testing market has been illustrated in the taxonomy table below:

Additional information on cross-segmented analysis and country-based market forecast is also provided in the report.