Introduction of new production, availability of reimbursement together with high occurrences of cancer are estimated to propel growth of the global gene therapy market in the years to come. Gene therapy refers to an experimental technique, which utilizes genes for the prevention and treatment of various diseases. It is expected that in the near future, this technology could assist doctors to place a gene into the cells of a patient for the purpose of his treatment. This therapy could be used as an alternative to surgery or drugs. Scientists are examining various approaches to this therapy, which could comprise

Gene therapy has emerged as a promising treatment option for a large number of diseases such as certain viral infections, certain cancers, and inherited disorders. This factor is likely to work in favor of the global gene therapy market in the years to come.

CAR T-cell use has recently garnered considerable attention from the sponsors following the exhibition of its immense promise in the treatment of several diseases. The promising future of CAR T-cell is estimated to amplify the growth opportunities of the global gene therapy market. Sponsors hail CAR T-cell use as a brand new business model of the future.

In the pipeline of pharmaceutical industry, gene therapy account for a considerable share and this trend is likely to continue in the years to come. In addition, significant advancement has been made in the fields of cellular and molecular biology is likely to fuel growth of the global gene therapy market in the years to come. rapid technological progress made in the gene-editing and genomics tools are further estimated to drive the demand for gene therapy.

Expanding at a stellar, double-digits CAGR (Compound Annual Growth Rate) of 40% over the forecast period of 2018 to 2026, the global gene therapy market is a dizzying trajectory, marking out a rosy landscape for players operating in the playfield. As per a Transparency Market Research report, based on extensive primary and secondary research, states that over the period states, the market would accrue a worth of USD 5164.03 million – a steep and impressive increase from the USD 17 million worth noted in 2017.

Fixing defective genes via introduction of new and healthy ones to fix severe genetic and chronic disorders is seeing an upward curve in demand for reasons of improved medical outcomes, major leaps in terms of technological advancement and minimal die-effects as compared to alternatives. Some of the most significant alternatives include surgery, and drug use.

Some of the most significant factors that the analysts of the report note include focused efforts towards marketing and commercialization, and a slew of approvals of new products hitting the global gene therapy market. Additionally, there are factors such as growing demand experienced for this treatment by a large pool of patients.

It is pertinent to note here that the global gene therapy market is consolidated and is dependent on clinincal research and development of the highest standards in order to chart growth. And, some of the players that operate the market landscape, and are into significant research projects include Gilead Sciences, Inc., Novartis AG, Sibiono GeneTech Co. Ltd., Spark Therapeutics, Inc., CELGENE CORPORATION, and Orchard Therapeutics Limited. 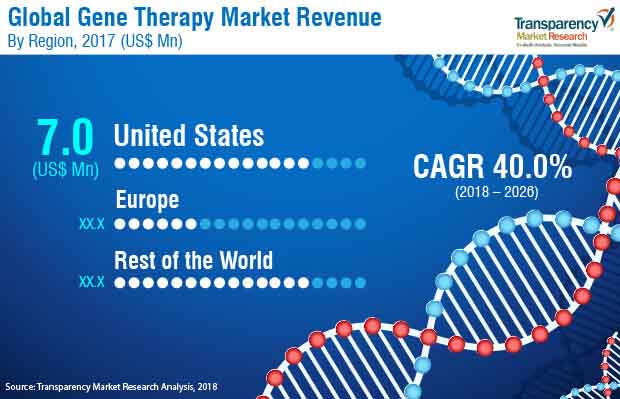 The global gene therapy market report by TMR is segmented based on type, application, and region. The former includes the only five products that have been approved so far for commercial use. These include Gendicine, Yescarta, Strimvelis, Kymriah, and Luxturna. Riding the first mover benefits, Yescarta helf the dominant position in the market in 2017, and the trend will continue, adding more worth to the sub-segment. This is the product that brought out the initial CAR T therapy in the market for large B-cell lymphoma that relapse.

The global gene therapy market’s regional segmentation includes incisive growth insights into some of the most significant areas that will shape up the overall growth in the market. These include North America, Europe, and Rest of the World. Researchers involved with the preparation of report claim that a massive chunk of about 40% would be accounted for by Europe over the forecast period. Some of the factors backing-up the market dominance of the region include high incidence of non Hodgkin lymphoma and increase in number of treatment centers into gene therapy.

This growth would be followed by North America region, owing to huge contributions from the United States of America which witnesses about 7500 cases of refractory DLBCL each year. These are ones that qualify for the CAR T therapy.

This report studies the current as well as future prospects of the global gene therapy market. Stakeholders of this report include companies and intermediaries engaged in the manufacture, commercialization, and provision of gene therapy products and new entrants planning to enter the market. This report comprises an elaborate executive summary along with a market snapshot providing overall information of various segments considered in the scope of the study. This section also provides the overall information and data analysis of the global gene therapy market regarding leading segments based on product, application, and region.

The market revenue for each product was estimated using bottom-up approach. The revenue generated by each product and application has been calculated considering marketing approvals of the products, sales, number of patients treated, cost of products, and pattern in different regions. The bottom-up approach for determining the country market size was studied using various market indicators obtained from secondary sources, which include different products and their applications and their cost variations in major country/region, prevalence and incidence in major countries for eligible patients with relapsed or refractory large B-cell lymphoma including diffuse large B-cell lymphoma (DLBCL) and primary mediastinal large B-cell lymphoma (PMBCL),  acute lymphoblastic leukemia (ALL), acute lymphoblastic leukemia (ALL) and head and neck cancer. Revenues of all publicly listed market players were obtained through secondary sources and analyzed for gene therapy specific revenues by narrowing down to revenue percentage for product segment through extensive secondary analysis of annual reports, investor presentations, press releases, primary interviews, and others. Data triangulation is based on secondary research (top-down and bottom-up approaches) and primary research. Moreover, historical year-on-year growth has been taken into consideration while estimating the market size. The market size and forecast in terms of US$ Mn for each segment has been provided for the period from 2017 to 2026. The report also provides the compound annual growth rate (CAGR %) for each segment for the forecast period from 2018 to 2026, considering 2017 as the base year.

The market overview section of the report explores market dynamics such as drivers, restraints, opportunities, and key trends that have a strong impact on the gene therapy market and could influence it in the near future. Market attractiveness analysis has been provided to explain the intensity of competition across different regions. The competitive scenario among different players is evaluated through market share analysis in the competitive landscape section of the report. These factors are likely to help market players take strategic decisions to strengthen their positions and expand their shares in the global gene therapy market.

In terms of region, the global gene therapy market has been segmented into the U.S., Europe, and rest of world. The market size and forecast for each of these regions has been provided for the period from 2017 to 2026, along with their respective CAGRs for the forecast period from 2018 to 2026, considering 2017 as the base year. A detailed qualitative analysis of factors responsible for driving and restraining the market and future opportunities has been provided in the overview section. This section of the report also provides the market attractiveness analysis and market share analysis by key players, thereby presenting a thorough analysis of the overall competitive scenario in the global gene therapy market.

The global gene therapy market has been segmented as follows: