Furfural derivatives have gained momentum as potential chemicals for the production of biochemical and biofuels. Furfural is the most commonly produced industrial chemical. It can be produced by using easily available raw materials in large quantities. Any material which contains pentosans can be used to produce furfural. Furfural is a solvent produced by the acid hydrolysis of pentosan, which are present in biomasses such as bagasse, corn cobs, rice hulls, and oats hulls. Furfural is a clear, odorless, colorless liquid with the ‘almond-benzaldehyde’ odor. The color of furfural darkens to a dark red/brown when exposed to sunlight in presence of oxygen. 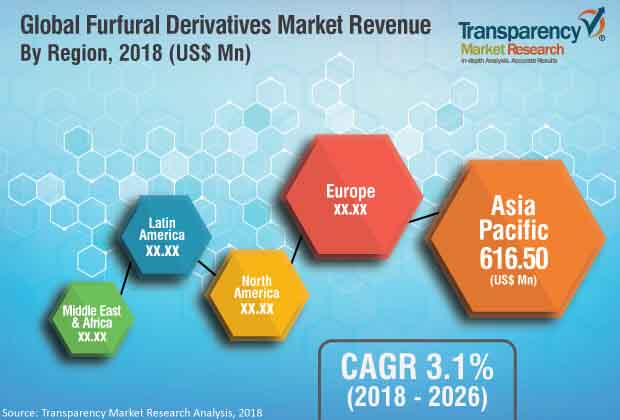 Major players establish new facilities and engage in acquisitions and merges to develop and launch new products. These strategies are likely to propel the furfural derivatives market during the forecast period. In 2018, Avantium Holding BV entered into a partnership with R&F Chemicals, a South Korea-based company, to boost its catalysis business. This partnership is expected to help the former to generate customer base for its Florence unit, in Italy. In 2013, Pennakem, LLC partnered with Chem Point, a leading technology-enabled distributor of specialty and fine chemicals, to increase the presence of its chemical brand by supplying 2-Methyltetrahydrofuran (MeTHF) across North America. Expansion of facilities helped the company to cater to the rising global demand for furfural derivatives.

The report comprises a detailed value chain analysis, which provides a comprehensive view of the global furfural derivatives market. The Porter’s Five Forces model for the furfural derivatives market has also been included to help understand the competitive landscape in the market. The study encompasses market attractiveness analysis, wherein applications are benchmarked based on their market size, growth rate, and general attractiveness.

The Furfural Derivatives Market has been segmented as follows: