Among the product type segments of fortified edible oils, the fortified rice bran oil segment is expected to register the highest growth rate of about 4.6%, owing to increased dietary awareness among consumers on lesser cholesterol levels, and increased production of rice husk during the forecast period. However, the soybean oil segment is expected to have the highest market share in the current year 2018.

Rising Concerns for Fortification as a Public Health Initiative 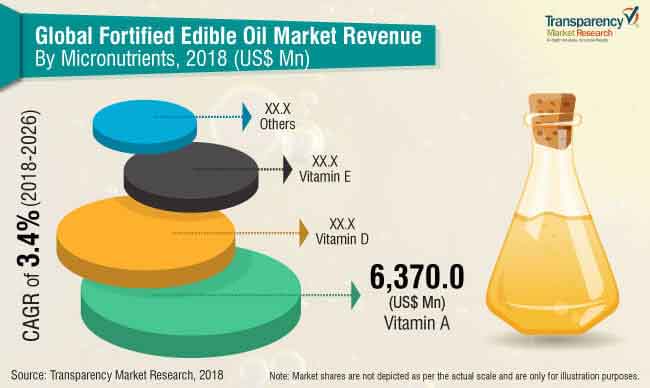 Public-private partnerships have a significant role to play in addressing malnutrition, by strategizing and implementing various fortification programs, such as introducing fortified edible oils in the growing economies, and to make affordable fortified food products for the target population.

Government Initiatives to Support Fortification Programs in Other Countries

The U.K. government plans to provide a start cost of £2.9 Mn for the fortified edible oils under the scheme ‘National Food Fortification Program’ in Tanzania. This project will be implemented by the non-government organization Helen Keller International. According to this initiative, it would be mandatory for private food manufacturers to fortify wheat, maize, and oil with essential vitamins and minerals, in Tanzania. This serves as an opportunity for edible oil producers to broaden their product portfolio with fortified edible oil during the forecast period.

Subsidy on the Procurement for Fortified Edible Oils

The Burundi Bureau of Standards works in close association with DSM and BASF to establish an oil fortification program across the country. DSM and BASF donate the vitamin premixes required for fortified edible oils, whereas, the Burundi Bureau of Standards ensures compliance with national cooking oil standards, so as to speed up the mandatory fortification in the country.

Yet another key feature of this report is the analysis of the global fortified edible oils market. Corresponding revenue forecast is also carried out in terms of absolute dollar opportunity. This is generally neglected while forecasting the overall market. Although, absolute dollar opportunity analysis is highly essential in determining the degree of opportunity that a provider can observe to execute, as well as to distinguish the potential resources from a sales perspective in the global fortified edible oils market.

To estimate the global fortified edible oils market size, the report considers various preliminary aspects based on secondary research. Furthermore, it highlights quantitative analysis such as region-wise market shares, and market shares by product type, micronutrient, distribution channel, and other qualitative inputs from primary respondents, which have been incorporated to arrive at accurate market estimations of fortified edible oils. The forecast presented in the report arrives at the total revenue being generated and expected revenue contribution in the future by the global fortified edible oils market.