Design flexibility and the ability to operate on low voltages and a wide range of operating temperatures are some of the key advantages associated with LED solutions. Fine pixel pitch LED displays are increasingly becoming popular in commercial settings due to their advantages such as greater energy efficiency, high quality, and high durability. Continuous research and development has led to the introduction of high-resolution fine pixel pitch LED displays that deliver superior image quality.

E-Commerce Emerges as Attractive Platform for Promotion and Sales

By sales channel, the fine pixel pitch LED displays market comprises retail shops, e-commerce websites, and direct sales. The direct sales segment is anticipated to hold the leading share in 2024 and e-commerce is expected to expand at a remarkable pace during the forecast period. Manufacturers of fine pixel pitch LED displays are focusing on international markets by promoting their products over e-commerce websites to a larger customer base. 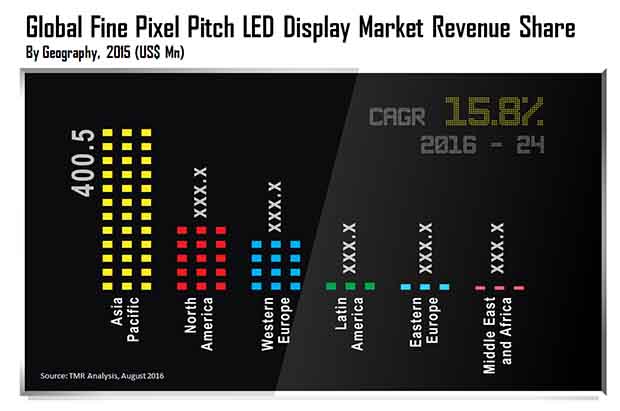 North America represents high market attractiveness as compared to other regions. Increasing spending on digital display advertising and out-of-home advertising by most of the major brands in the U.S. and Canada is a key factor driving the growth of fine pixel pitch LED displays in the region.

The Middle East and Africa (MEA) and Latin America are likely to present potential opportunities for fine pixel pitch LED displays in the coming years. The rapid growth in tourism in MEA has aided the hospitality sector and leading players are emphasizing on digital advertising for events and promotions. The 2016 Olympics in Rio de Janeiro, Brazil and other upcoming major sporting events are anticipated to foster the growth of fine pixel pitch LED displays in Latin America.

The use of LEDs has expanded exponentially due to the awareness among the global populace about the associated benefits. The energy-saving mechanism of LEDs has proven to be an attractive growth factor.

The fine pixel pitch LED displays market report provides analysis for the period 2014–2024, wherein the period from 2016 to 2024 is the forecast and 2015 is the base year. The report covers all the major trends and technologies playing a key role in the fine pixel pitch LED displays market’s growth over the forecast period. It also highlights the drivers, restraints, and opportunities expected to influence the market’s growth during the said period in terms of revenue (in US$ Mn) and volume (in square meters), across the geographies including North America, Latin America, Western Europe, Eastern Europe, Asia Pacific, and Middle East & Africa (MEA). North America comprises of the U.S. and Canada, while Latin America covers Mexico, Brazil, and Rest of Latin America. Western Europe region covers the U.K., Germany, France, Spain, Italy, Nordic, Benelux, and Rest of Europe, while Eastern Europe comprises of Russia, Poland, and Rest of Eastern Europe. Furthermore, the Asia Pacific is divided into China, India, Japan, ASEAN, ANZ, and rest of Asia Pacific. MEA covers Gulf Cooperation Council (GCC), North Africa, South Africa, and Rest of Middle East and Africa.

Key trends have been provided for every geographical segment in the report in order to give a thorough analysis of the overall state of the fine pixel pitch LED displays market, globally. Moreover, the report provides an overview of the various strategies of key players in the market.

The fine pixel pitch LED displays market is segmented as below: