Erythropoietin drugs can be defined as naturally occurring hormone secreted from the kidney, and perform function in development of red blood cells (RBC) by stimulating the bone marrow tissues in the bone. Rising the RBC count increases the hemoglobin level in the blood stream, transport the sufficient amount of oxygen in every part of body. The market is anticipated to grow at a significant rate owing to various factors such as high return on investments, patent expiration of erythropoietin drugs, and growing focus on awareness programs by the governmental and non-governmental organizations, and tax credits and fee waivers offered by the government, among others. According to the research report, the global erythropoietin drugs market is expected to be worth US$19,379.2 mn by the end of 2025, as the market rises at a steady CAGR of 7.5% between 2017 and 2025. 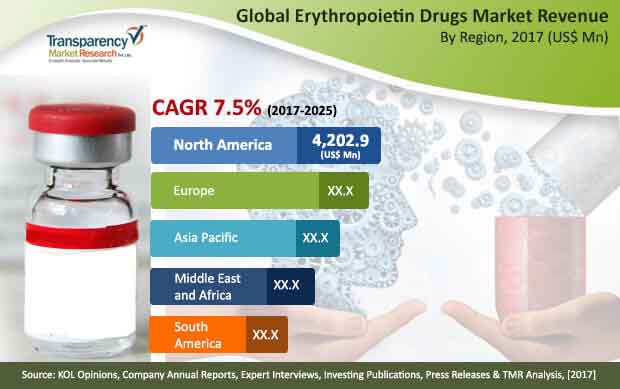 Geographically, the market has been segmented into five regions, including North America, Europe, Asia Pacific, Latin America and Middle East and Africa. North America was the dominant region in terms of revenues in 2016 and is anticipated to remain dominant in the forecast period. The growth in the region can be attributed to the increasing approvals of erythropoietin drugs, government incentives offered for research on chronic disease such as research and development grants, drug exclusivity, tax credit and fee waivers, among others.

Europe is anticipated to be the trailing next in terms of revenues in the forecast period. This growth can be attributed to the increasing prevalence of chronic diseases in the region. Growth of the segment is led by government initiatives for cancer and other chronic disease treatment. Governments of various countries in the region are taking efforts to decrease the rate of incidence of cancer. Asia Pacific region is growing with highest CAGR value. High incidence rate of hematological diseases in countries such as India, China, Bangladesh, and Pakistan is driving the erythropoietin drugs market in Asia Pacific.

Erythropoietin is a hormone which produce inside the body from kidney. EPO helps in the development of RBC inside the body and high number of RBC increases the level of hemoglobin in the blood which transport the oxygen in every part of the body. The market for these erythropoietin drugs is anticipated to grow significantly in the forecast period, owing to the rising prevalence of chronic diseases, focus of government and non-government organizations on creating awareness, research and development grants, and fee waivers and tax credits offered, among others.

The research is a combination of primary and secondary research, conducted for understanding and arriving at trends, used to forecast the expected revenue of drugs employed in the treatment of chronic diseases in the near future. Primary research formed the bulk of our research efforts with information collected from in-depth interviews and discussions with a number of key industry experts and opinion leaders. Secondary research involved study of company websites, annual reports, press releases, investor presentations, analyst presentation and various international and national databases. The report provides estimated market size in terms of US$ Mn for drug class, drug type, drug application, distribution channel, and geography for the period 2015 to 2025, considering the macro and micro environmental factors. The revenue generated from each drug class, drug type, drug application, and distribution channel was calculated by considering the prevalence of chronic diseases, erythropoietin drug approvals, regulatory procedures, and the awareness of chronic diseases across all the geographies.

Market share analysis among the market players is analyzed to signify the contribution of these players in the market in terms of percentage share. All these factors will help the market players to decide about the business strategies and plans to strengthen their positions in the global market. Based on geography, the market has been analyzed for major regions: North America, Europe, Asia Pacific, Latin America, and Middle East & Africa. The study also covers detailed country analysis contributing majorly in the erythropoietin drugs market.

The Erythropoietin Drugs Market has been segmented as follows: