In the current day and age, data security, management, and storage have become an imperative part of organizations operating in an array of industrial domains. At present, within the data resilience sphere, conventional SAN storage that operates using Redundant Array of Independent Disks (RAID) is gradually losing its sheen, owing to evolving data requirements. Although mirroring, parity and striping in RAID implementation offer a high degree of protection, some of the restraints including, high recovery timings, the steep cost of resiliency, and vulnerability associated with RAID recovery have played a major role in the development of alternatives such as erasure coding, that is predominantly different in comparison with other hardware-based systems. 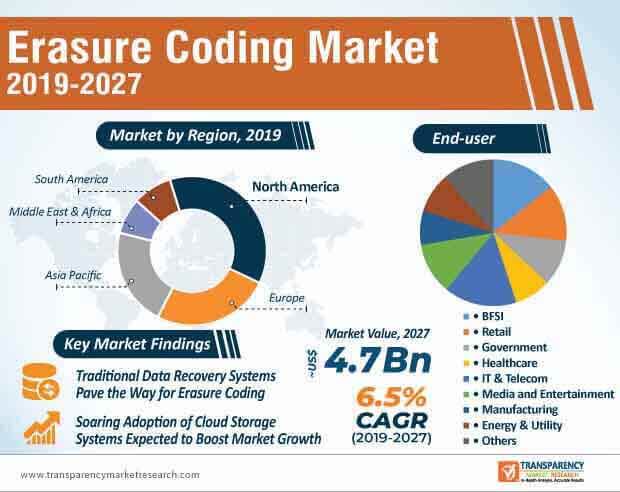 Strides taken by erasure coding, along with Hadoop 3.0 has played an imperative role in enabling users to store over 50% additional data within the same cluster– a much needed technological breakthrough that streamlines data storage requirements. Although the adoption of erasure coding is expected to move in the upward trajectory during the forecast period, companies operating in the current erasure coding market are expected to find solutions to overcome the challenges associated with high CPU usage, latency issues, and pressure on network overheads. In addition, companies are also likely to strike a balance between soaring costs while optimizing the performance of their offerings.

In the past couple of years, Hadoop has integrated erasure coding in version 3.0, marking a major shift for Hadoop Distributed File System (HDFS). With the adoption of erasure coding, the replication factor of data is set to hover around 1.5x– boosting the storage efficiency by around 50%. At present, medium-large scale organizations are highly inclined toward deploying erasure coding, as they run large data clusters wherein 100-plus nodes are likely to select use cases with added care.

Erasure coding has played an important role in enhancing the performance of large clusters. The advent of erasure coding is expected to revolutionize Hadoop in which the segregation of storage and computing is likely to gain significant recognition and acceptance. Owing to the increasing adoption of erasure coding in Hadoop, the demand for cluster coding is expected to witness exponential growth during the forecast period. The demand for erasure coding from large enterprises is projected to remain higher than those from small & medium-sized enterprises during the forecast period.

Technological advancements and evolving data requirements are set to play an important role in boosting the prospects of the erasure coding market during the assessment period. As storage efficiency continues to remain important for business organizations, the adoption of erasure coding in large-scale cloud storage systems is on the rise, particularly for data protection from the server and other types of failures in a datacenter. Some of the most common erasure coding techniques that have gained traction include Striping Encoding and Replicating Encoding. The adoption of these two techniques is on the rise, as they minimize network traffic, have an improved write performance, and read performance. The significant development in cloud storage systems is expected to shape the growth of the erasure coding market during the forecast period. The adoption of erasure coding is on the rise in an array of end-use industries, including healthcare, IT & telecom, BFSI, retail, government, and media & entertainment. 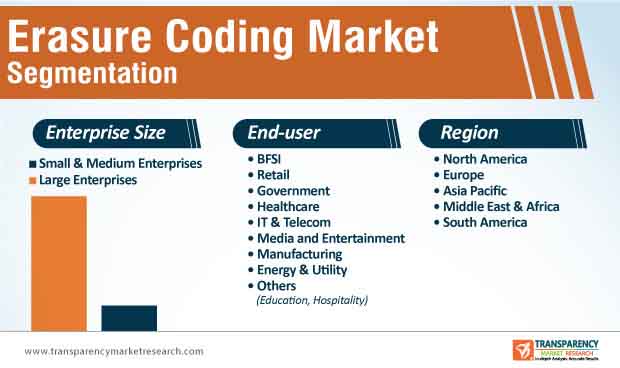 Stuck in a neck-to-neck competition with other brands? Request a custom report on Erasure Coding Market

The global erasure coding market is expected to grow at a CAGR of 6.5% during the forecast period. The market growth can be primarily attributed to a range of factors, including significant progress in cloud storage systems, integration in Hadoop 3.0, high demand for data efficiency, evolving data requirements, and need to minimize network traffic. The erasure coding market is likely to flourish during the assessment period, owing to the soaring demand from a host of end-use industries and balancing data resiliency. North America and Europe are projected to present participants of the erasure coding market with plenty of growth opportunities, owing to the presence of top tier market players, advancements in technology, and a high number of large-sized enterprises in these regions who are increasingly leaning toward erasure coding.

A latest study collated and published by Transparency Market Research (TMR) analyzes the historical and present-day scenario of the global erasure coding market, to accurately gauge its potential future development. The study presents detailed information about the important growth factors, restraints, and key trends that are creating the landscape for the future growth of the erasure coding market, to identify the opportunistic avenues of the business potential for stakeholders. The report also provides insightful information about how the erasure coding market will progress during the forecast period 2019-2027.

The report provides detailed information about the erasure coding market on the basis of comprehensive research on various factors that play a key role in accelerating the growth potential of the market. Information mentioned in the report answers path-breaking questions for companies that are currently functioning in the market and are looking for innovative ways to create a unique benchmark in the erasure coding industry, so as to help them formulate successful strategies and take target-driven decisions.

The research methodology adopted by analysts to compile the erasure coding market report is based on detailed primary as well as secondary research. With the help of in-depth insights of industry-affiliated information that is obtained and legitimated by market-admissible resources, analysts have offered riveting observations and authentic forecasts of the erasure coding market.

During the primary research phase, analysts interviewed industry stakeholders, investors, brand managers, vice presidents, and sales and marketing managers. On the basis of data obtained through the interviews of genuine resources, analysts have emphasized the changing scenario of the erasure coding market.