Evolution of Hadoop is a key factor spurring the Hadoop market

At its core, Hadoop is recognized for its design to analyze mountains of data that are generated across a host of industry verticals such as energy and entertainment. In fact, Hadoop is considered as the foundation of next-generation data-based applications. Apart from business applications, social media channels such as Facebook and Twitter also use Hadoop to some extent to manage massive amount of data

Evolution of Hadoop is a key factor spurring the Hadoop market. The explosion of data due to unrestrained use of electronic devices has led businesses to adopt a reliable tool to filter and utilize this data. For such needs, companies such as IBM and Intel have developed their own version of Hadoop to serve their business needs.

Asia Pacific is emerging as another key region in the Hadoop market. Explosion of data due to massive use of electronic devices has led businesses to deploy data-based applications to filter and manage this information. Hadoop holds a sway as it is being recognized as the foundation of next-gen data-based applications.

The global Hadoop market is poised for staggering growth in the upcoming years. From over a decade of its birth, Hadoop has evolved into a robust platform for Big Data storage and analysis.  Initially developed to support the distribution of open source Nutch search engine project, today, Hadoop is the foundation of next generation data-based applications. Almost all applications on the Internet such as Facebook and Twitter uses Hadoop in some capacity to manage the deluge of data. In addition, companies in the physical world across a host of industry verticals such as entertainment and energy are using Hadoop to analyze mountains of data they are generating and collecting.

At present, the explosion of data due to incessant use of electronic devices has necessitated the adoption of a reliable tool to manage and utilize this data. Large companies such as Intel and IBM are developing their own version of Hadoop to suit their business needs. 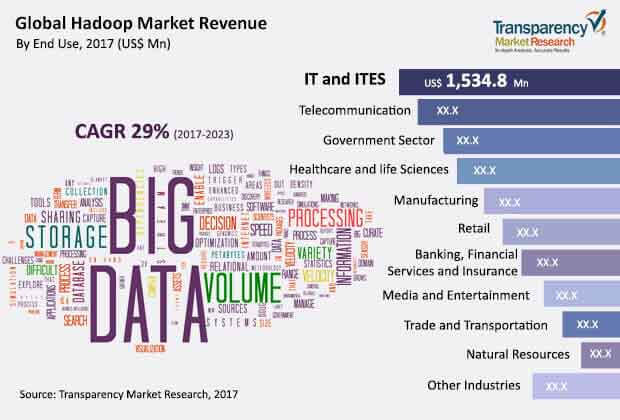 On the flip side, however, the dearth of personnel adept with Hadoop framework and complexities involved in handling the associated architecture are bottlenecks to the growth of Hadoop market.

As per estimates of a market intelligence study by Transparency Market Research, the global Hadoop market is likely to expand at a phenomenal 29% CAGR between 2017 and 2023.

The global Hadoop market is segmented on the basis of type, application, and region. Depending upon type, the key segments of the market are software, hardware, and services. Of them, services is presently the leading segment. However, vis-à-vis growth rate, software segment is anticipated to surpass all segments in the near future. This is mainly because of increasing investments for development of more effective software across a host of industry verticals is anticipated to contribute to the growth of software type segment. The software segment is further sub-segmented into application software and performance monitoring software.

The worldwide Hadoop market on the basis of application can be segregated into banking, financial service and insurance (BFSI), manufacturing, retail, telecommunications, healthcare and Lifesciences, media and entertainment, natural resources, trade and transportation, government, IT and ITES, and others. Of them, IT and ITES held the leading 18.58% market share in 2014. The rising adoption of Hadoop platform in outsourced services is mainly driving the IT and ITES application segment.

However, the demand for Hadoop in BFSI is likely to outpace other application segments. Digitization of banking, financial services, and insurance sector leading to mounting volumes of critical consumer-related data has necessitated the adoption of a reliable tool to manage the data.

Geography-wise, the key segments into which the Hadoop market is divided are North America, Europe, Asia Pacific, and Rest of the World (RoW). North America currently contributes the leading revenue to the Hadoop market. The supremacy of the region is attributed to digitally and technologically advanced infrastructure across industries. While Europe is predicted to display stable growth, Asia Pacific is estimated to witness to emerge as a key market for Hadoop in the years ahead. Increasing adoption of Hadoop across several end use segments and incessant adoption of electronic devices leading to the generation of massive amount of data.

The business intelligence study on the global hadoop market offers useful insights to serve as a reliable business instrument. The key objective of the report is to provide up to date information on growth trends and growth opportunities in the global hadoop market for the aforementioned forecast period. It projects growth opportunities for both existing and new market players and also provides a growth trajectory of this progressive market.

An intrinsic component of the hadoop market report is the analysis and recommendations on the said market. The introductory part of the report outlines conventions and notations relevant in the context of IT and telecom sector, followed by terms and terminologies specific to hadoop market. The analysts involved in the making of this report have provided key strategic recommendations for existing as well as new players to sustain competition. The report provides competitive landscape, which includes a dashboard view of companies operating in the hadoop market. It also contains company profiles of leading companies along with insights into growth strategies adopted by these players across regions. In addition, analysts also examined various socio-economic factors such as economic indices and population demographics of key countries in various regions.

The report employs top-down approach to validate the estimations provided for hadoop market, whereas bottom-up approach has been employed to evaluate market numbers in the said market. Weighted average selling price to provide market share estimations of key segments is in the scope of the study. The estimates presented in the report is based on revenue projections of key companies in the hadoop market.

To present market projections, the methodology involves sizing the current market. This serves to form the basis to predict the shape of the market in the future. Analysts \reached out to several subject matter experts in the IT and telecom sector. Given the nature of the market, analysts triangulated outcomes based on different analysis such as demand side, supply side, and market dynamics. Quantification of data along with inclusion of quality inputs gathered directly from industry experts and opinion leaders are highlights of the report.

Apart from this, the report also includes year-on-year growth assessed on the basis of regional growth. This is provided to identify growth trends and to examine growth opportunities in the hadoop market. Furthermore, market attractiveness index for key segments under each category are the highlight of this report. This index helps in identifying lucrative opportunities in the hadoop market for the aforementioned forecast period. In the final section, the report provides a dashboard view based on various categories of service providers to make for an interesting read.

The report presents useful insights on competitive strategies and competitive hierarchy in the hadoop market. It identifies leading companies and profiles them for distinguished business attributes. This helps readers to obtain a dashboard view of various parameters such as revenue, key developments, and presence in the global market. The competitive hierarchy helps evaluate competition in the market over a timescale.