Evolving trends have a direct impact on the dynamics of the epoxy curing agents industry. These trends include replacement of dicyandiamide curing agents with phenol and development of curing agents with low volatile organic compounds. Furthermore, factors such as rise in demand from the paints and coating industry and increasing demand for epoxy resin-based composites in the aerospace and wind energy industries are expected to fuel the global epoxy curing agents market. However, increasing raw material prices have increased the overall product costs, which is hampering the market. 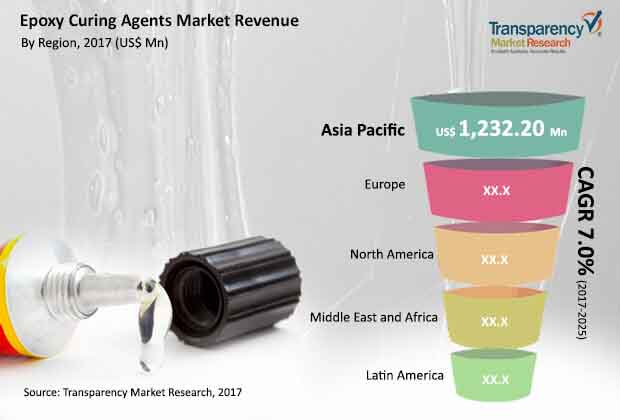 Major players in the epoxy curing agents market have adopted expansions and joint ventures as key strategies to expand their network and share their investments. For instance, in July 2017, Huntsman International LLC. Completed the expansion of its world-scale amines production facility in Jurong Island in Singapore. The company had a production capacity of 25,000 tons per year before the expansion. Currently, its production capacity is 50,000 tons per year. The expansion fits perfectly with Huntsman International’s investment and leadership and has helped expand its product portfolio. Launching new products and facilities is likely to be the long term strategy of epoxy curing agent manufacturers. For example, in January 2016, Huntsman launched two new waterborne epoxy curing agents namely EFFAMINE M1000 polyetheramine and JEFFAMINE M2070 polyetheramine. JEFFAMINE M series polyetheramine products are monoamines based on polypropylene glycol (PPG) or polyethylene glycol (PEG) backbones. Primary applications of these products are formulating emulsifiers, pressure sensitive adhesives, and corrosion inhibitors. Additionally, these products provide benefits such as surfactant properties to modify a variety of resin types and are water soluble. Furthermore, in April 2018, Hexion launched a new hybrid epoxy/polysiloxane resin product called EPOSIL Resin 5550, which offers superior performance in protective coatings. The product offers superior resistance to corrosion, high resistance to temperature, and anti-graffiti properties.

Curing agents play a vital role in determining the properties of the final cured product. The properties of amine-based curing agents include chemical and thermal resistance and weatherability. The major applications of amine-based curing agents include coatings, adhesives, composites, and electrical & electronics, among others. Polyamides resin, widely used as a curing agents for epoxy resins, is formed by the condensation reaction between dimer acid and polyamine and contains reactive primary and secondary amines in its molecules. As polyamides have high hydrocarbon moiety in their molecules, they cure epoxy resins into highly plasticized rigid thermosetting polymers. The cured resins offer high tensile, compression, and bending strengths and are stiff, strong, and offer superior shock resistance. Amines are classified into aliphatic, alicyclic, and aromatic amines, according to the type of hydrocarbons involved. They all are important curing agents for epoxy resins. Expansion in the construction industry is a major factor fuelling demand for epoxy curing agents. Increase in use of epoxy curing agents in construction applications such as increasing concrete bonding, flooring, and marble laminate is expected to further propel the epoxy curing agents market.

Epoxy curing agents are added to the epoxy system to alter or modify curing characteristics or the performance of the final thermoset. Growing demand for epoxy curing agents in industrial coatings, civil engineering applications, and in developing wide range of adhesives, and composites. Advances in manufacturing technologies have allowed companies test different material chemistries. Key product groups are aliphatic amines, diluents, accelerators, adhesion promoters, specialty resins, and  additives.  Pot life is also a key performance characteristic in the choice of epoxy curing agents. Over the past few decades, rise in demand for curing agents is a key trend expanding the avenue in the epoxy curing agents market. Aliphatic amines are being extensively used in civil engineering applications, such as flooring and patch repair systems. Sometimes these amines act as an accelerator for other amines. There is a growing effort by industry players to unveil or develop epoxy curing agents that are a combination of mechanical and electrical properties. Low viscosity, good flexibility, and good color stability are some of the key desired properties in end-use industries. Additionally, a growing number of epoxy curing agents that are compatible with wide range of substrates are being unveiled in the key regional markets.

The COVID-19-led restrictions adversely affected the macroeconomic fundamentals and industry dynamics across various businesses. These wide-scale disruptions are also affecting the sales and consumption patterns of epoxy curing agents. The demand in end-use industries has also been relatively low in the first part of 2020 due to the worldwide pandemic. However, with the strides in the construction sector, the demand for new formulations in epoxy curing agents also saw an uptick. The growing demand for solvent-free coatings and curing agents in oil and gas pipelines is bolstering the prospects in the epoxy curing agents market. Further, there has been growing uptake in heavy duty industrial applications. Expanding array of epoxy curing agents will help meet the wide range of applications in civil engineering adhesives.

The report comprises a detailed value chain analysis, which provides a comprehensive view of the global epoxy curing agents market. The Porter’s Five Forces model for the epoxy curing agents market has also been included to help understand the competitive landscape in the market. The study encompasses market attractiveness analysis, wherein applications are benchmarked based on their market size, growth rate, and general attractiveness.

The report provides the estimated size of the epoxy curing agents market for 2017 and forecasts for the next nine years. The size of the global epoxy curing agents market has been provided in terms of revenue and liters. Market numbers have been estimated based on product and end-use industry. Market size and forecast for each major product and end-use industry have been provided in terms of the global and regional market.