Complexities involved in diagnosing and treating epilepsy, seizures, and similar disorders pose a major challenge for healthcare providers. Typically, based on the magnitude of the seizure or the condition of the patient, healthcare professionals could turn to simulation techniques, surgical procedures, or suggest a diet to patients susceptible to epilepsy. The evaluation and diagnosis of epilepsy have come a long way in recent years due to significant progress in technology and the advent of computer-based epilepsy monitoring devices. Epilepsy monitoring devices provide critical insights to professionals pertaining to the type of seizure based on which, they can provide the most suitable treatment to the patient. Further, these devices have played an imperative role in minimizing the number of Sudden Death due to Epilepsy (SUDEP) cases, due to which, demand in the epilepsy monitoring devices market is expected to witness significant increase.

As such, the value of the global epilepsy monitoring devices market is set to witness 1.7X growth over the forecast period (2019-2027), at the back of the ascending demand for wearable epilepsy devices, worldwide. 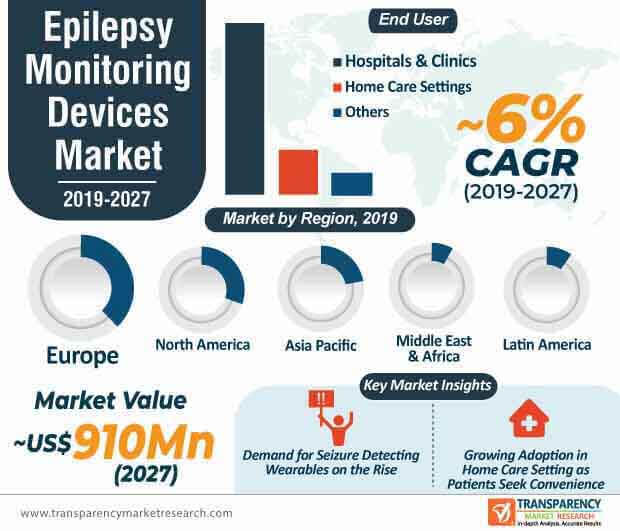 Seizure symptoms could wary from patient to patient. While some patients may lose control and blankly stare for a few seconds, others may move their arms and legs repeatedly during a seizure. Although there is no concrete solution to stop a seizure when it occurs, rapid progress in wearable epileptic device technology has garnered significant popularity in the past few years. Wearable epileptic devices notify a patient about the possibility of a seizure in advance - a major factor that is expected to influence the adoption of these devices in the near future.

Research & development activities pertaining to the use of wearable epilepsy monitoring devices are in full swing, particularly in developed regions such as North America and Europe - two regions with robust healthcare facilities and infrastructure. For instance, researchers from the Universities of Trieste, Strasbourg, Manchester, and International School for Advanced Studies, Italy, revealed that, minute flakes of graphene have the potential of stopping epileptic seizures. The team of researchers further elaborated on how graphene flakes interfere with the signal at excitatory neuronal synaptic junctions, and thereby prevent seizures.

Manufacturers operating in the epilepsy monitoring devices market are highly inclined toward offering solutions that would reduce the number of sudden unexpected deaths in epilepsy cases, worldwide. At present, SUDEP poses as a major threat, and is a cause of concern for patients suffering from neurological problems that cannot be treated using medication. Furthermore, within this population, mal seizures, also known as tonic-clonic seizures, is a major concern, as it could lead to muscle contractions and loss of consciousness - two symptoms linked with SUDEP, especially when the patient is alone.

Rise in Prevalence of Epilepsy: A Key Driver

The report includes an elaborate executive summary, along with a snapshot of the growth behavior of various segments included in the scope of the study. Furthermore, the report sheds light on the changing competitive dynamics in the global epilepsy monitoring devices market. These indices serve as valuable tools for existing market players as well as for entities interested in entering the global epilepsy monitoring devices market.

A unique research methodology has been utilized by TMR to conduct a comprehensive research on the growth of the global epilepsy monitoring devices market, and arrive at conclusions on the future growth prospects of the market. This research methodology is a combination of primary and secondary research, which helps analysts warrant the accuracy and reliability of the drawn conclusions.