Electrophysiology Devices - Breaking Through the Bottlenecks of Effective Arrhythmia Treatment

Successful patient outcomes are taking over products and services as the key focal point of the healthcare industry. This reorientation of focus toward patient satisfaction and outcomes in healthcare pools is reinforcing the adoption of technology. For healthcare providers, technology has not only emerged as a magic wand revitalizing their services, but has also laid new grounds for enhanced customer interaction.

One of such technologies that caused a stir in the cardiology sector was 'electrophysiology (EP)', which was immensely appreciated for its efficacy in terms of controlling and treating arrhythmia. Arrhythmia continues to be one of the major cardiac disorders, preceded by sudden cardiac death (SCD), accounting for approximately 15-20% of total deaths. Electrophysiology devices are forcing their way through ingrained preferences for conventional methods to treat cardiac arrhythmia. Acknowledging the importance of this market, Transparency Market Research, in its recent research study, lays bare the untapped potential in this market for the forecast timeline of 2019–2027. 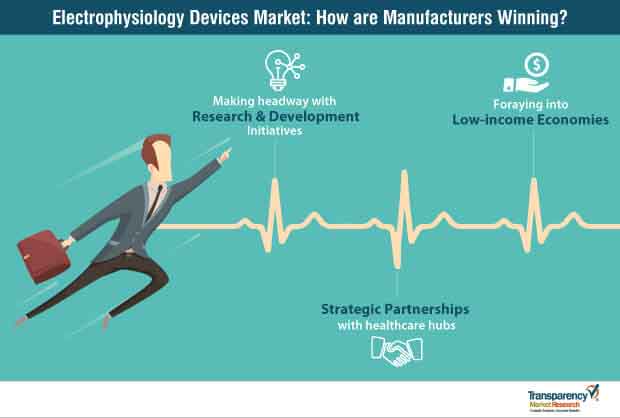 Electrophysiology Devices are Even Beyond 'Here-to-Stay'

As the prevalence of cardiac arrhythmia is continuously increasing one a global level, electrophysiology is set for substantial recognition in the coming years. Distinctive modalities of electrophysiology devices, including cardiac computerized tomography (CT), cardiac magnetic resonance imaging (CMR), fluoroscopy, echocardiography, and electro-anatomic mapping, assist healthcare professionals to prodigiously analyze the underlying mechanisms of multiple cases of arrhythmia. Revenues from the electrophysiology devices market closed in on a valuation of nearly US$ 5,271 Mn in 2018.

Worldwide penetration of electrophysiology devices is likely to see a tectonic upshift through to 2027, as technological disruption is well underway in the healthcare space. The strategic expansion plans of market partakers remains aligned toward matured markets, which are already consolidated by the large-scale presence of prominent companies. While matured markets will continue to offer considerable revenue-making opportunities for aspiring brands in the electrophysiology devices market, emerging markets are likely to promise new opportunities for these brands to level up their sales revenues.

Advances in the electrophysiology (EP) devices landscape have picked pace over the last few years, thereby pushing the limits of product innovation paradigms. One such overriding trend in the electrophysiology devices market was the introduction of leadless pacemakers. Leadless pacemakers serve as viable alternatives to the conventional variants, especially in case of patients who have a history of device infections. Conventional pacemakers are emerging as a major area of concern, for the fact that, they are associated with substantial risk of morbidity. This, in turn, is laying a strong foundation for a 'never seen before' adoption of leadless pacemakers. 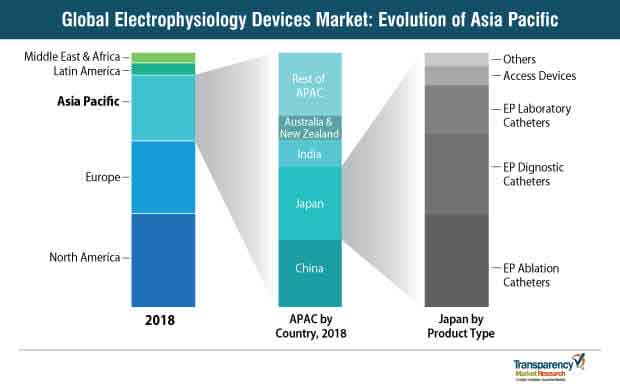 Brands in the electrophysiology devices market, facing promising opportunities and unexpected headwinds, are vying to constantly innovate to remain relevant in the fast-evolving competitive sphere. Significant investments in research and development (R&D) continues to be a key cornerstone for market players, as extensive focus on R&D certainly pays off well. For instance, Johnson & Johnson is known to invest substantially in research & development initiatives to fuel new product launches and hold a technological edge over its rivals, which can be gauged by the fact that, its R&D expenses were recorded to be approximately US$ 10.8 Bn in 2018 alone.

Market frontrunners are also finding new ways to venture into low-income economies, wherein, optimal healthcare services are fairly scarce to serve an ever-increasing population pool. Market players, in a bid to shift the odds in their favor, are expanding into these economies, and offering effective cardiovascular services so as to reap huge profits. For instance, in 2018, Philips, along with the governments of Ethiopia and the Netherlands, signed a 7-year agreement to build Ethiopia’s first ever specialized cardiac care center, wherein, non-invasive electrophysiology techniques would be made available for the seamless detection and monitoring of arrhythmia.

A Panoramic View of the Market Structure

The electrophysiology devices market space, as far as the top 4 players are concerned, reflects a notable degree of consolidation, due to the fact that, these players command over 60% of the global market share. The monopoly of these companies, namely Boston Scientific Corporation, Medtronic Plc., Abbot Laboratories, and Biosense Webster, Inc., is predominantly led by powerful product portfolios and significant brand recognition. However, the market remains fragmented at the bottom with the large-scale presence of regional players.

The electrophysiology devices market space will continue being a highly competitive and dynamic sphere, wherein, products that will manage to out-perform others in terms of efficiency and performance will gain consumer appreciation. In addition, leading players in the electrophysiology will make headway with high investments in their R&D infrastructure, which will help them meet the changing industry requirements. 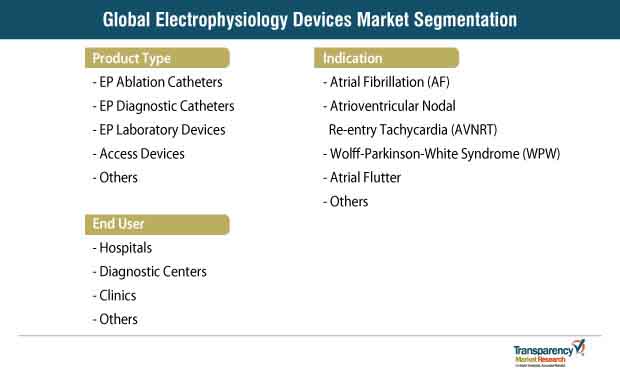 The authors of this report project magnificent growth of the electrophysiology devices market through to 2027, as healthcare providers are recognizing the power of technologically-advanced devices and investing in the same. Pervasiveness of arrhythmia, worldwide, is laying the grounds for the necessary deployment of electrophysiology devices facilitating impeccable treatment.

Report authors opine that, the electrophysiology devices market is highly likely to reach a value of nearly US$ 11 Bn in 2027. However, market players still have a long way to go in terms of product innovation and development targeted toward successful outcomes and enriched patient experiences.

The report on the electrophysiology devices market offers a deep dive into the regional analysis, wherein, every region has been evaluated in detail. Some of the regions include-

The TMR study on the electrophysiology devices market has been prepared in an extremely meticulous manner by relying on a comprehensive research methodology. The research methodology for the research report on the electrophysiology devices market follows both, the bottom-up as well as top-down approach, to determine the market size on the basis of supply-/demand-side metrics.

In the primary research phase of the electrophysiology devices market report, respondents from the supply side, including CEOs, presidents, directors, chairmen, vice presidents, product/sales/marketing/brand managers, sales and marketing professionals of prominent companies, and distributors were contacted and interviewed. In addition, useful insights from doctors, nurses, laboratory technical staff, research centers, and hospitals are also included in the scope of the electrophysiology devices market report.

The TMR research study offers a comprehensive evaluation of the market segmentation, wherein, the electrophysiology devices market has been analyzed in detail by product type, indication, and end user.