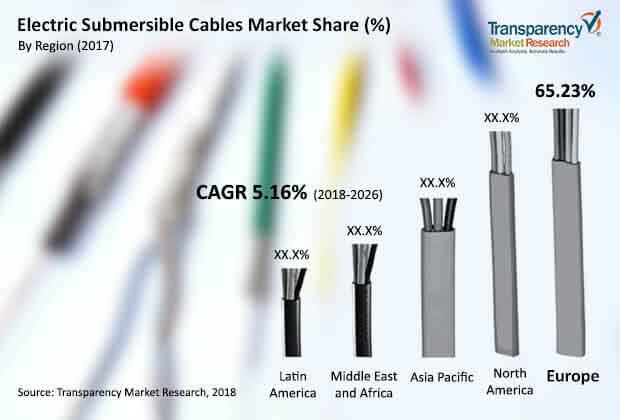 With the end of easy oil era the newly discovered oil and gas reservoirs are located at a much greater depth. Maturing oil wells and depleting oil reserves are prompting exploration & production companies to drill deeper. This has lead to an increase in the overall depth of an oil well for extracting these resources. In turn, this has resulted in deeper electrical submersible pump settings, thereby boosting the demand for electric submersible cables that are employed to supply power from the power source to the pump motor.

The gas lift method has become more prevalent for artificial lift mechanism for shale gas with the advent of shale gas boom, especially in the U.S. Following the footsteps of the U.S., countries across the globe are now evaluating the probability of extracting shale gas resources. However, nearly 80% of oil wells in the U.S. are onshore stripper wells. Most of these onshore wells employ sucker rod pumps for production. Among onshore non-stripper wells, 27% utilize sucker rod pumps, while 52% use gas lifts. The remaining 21% employ electrical submersible pumps and other methods. This indicates the dominance of sucker rod pump and gas lift mechanism as an artificial lift technology in the hydrocarbons sector in the U.S., especially in the shale gas sector. Thus, limited deployability of electrical submersible pumps for shale gas production is anticipated to hamper the electric submersible cables market in the near future.

The largest oil reserves in the world are primarily concentered in three countries: Saudi Arabia, Venezuela, and Canada (specifically, Alberta). Oil production in Canada is estimated to rise by 800,000 bbl/d by 2020, making the country a prominent source of global oil supply. Introduction of electrical submersible pumps has been a significant technological improvement to the steam-assisted gravity drainage (SAGD) process. Electrical submersible pump systems are an ideal choice for thermal recovery, including SAGD, as they can produce higher flow rates and operate more reliably and economically than other artificial lift methods.

Electric submersible cables are used to provide power from surface power sources to the downhole electrical submersible pumps. These pumps are mainly used in the artificial lift of oil and gas resources, offshore drilling rigs, irrigation, mine dewatering, drinking water supply, sewage treatment plants, industries, fountains, sea water filtration plants, swimming pools, and aquariums. These cables are generally manufactured in flat and round cross-sections, and the selection of the type of cable depends upon the available clearance through which theses cables have to pass. The selection of a quality electric submersible cables is very important, as they can affect the operation and can lead to increase in maintenance costs and downtime of the equipment.

The report includes detailed value chain analysis, which provides a comprehensive view of the global electric submersible cables market. Porter’s Five Forces model for the electric submersible cables market has also been included to help understand the competitive landscape in the market. The study encompasses market attractiveness analysis, where in ESP cable type, insulation, and end-user industry are benchmarked based on their market size, growth rate, and general attractiveness.

The global electric submersible cables market has been segmented as follows: