Ductile iron pipe is a direct evolution of cast iron pipe. Ductile iron has proved to be better pipe material; it is stronger and fracture resistant. Typically, ductile iron pipes are manufactured by using centrifugal casting in metal. Protective internal lining and external coatings are applied on both the surfaces of a pipe to protect it from corrosion. The average lifespan of a ductile iron pipe exceeds more than 100 years. Pipe dimensions are standardized, by the organizations such as American Water Works Association (AWWA) in U.S., ISO 531 / EN 545/598 in Europe, and AS/NZS 2280 (metric) in Australia. Thus, different regions adhere to different standards based on climatic conditions and applications. 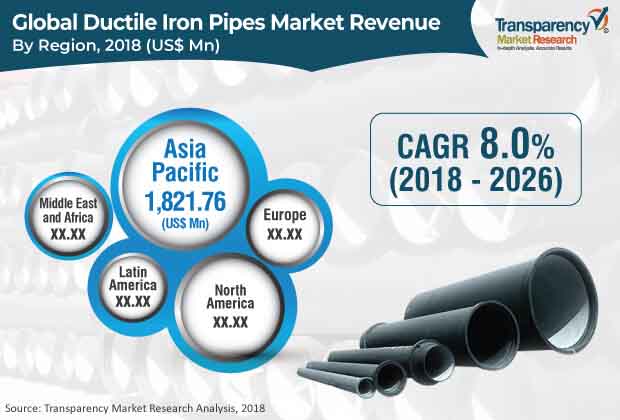 Key players operating in the global ductile iron pipes market need to focus on promoting benefits of using ductile iron pipes. Major players are engaged in establishing new facilities and enter into acquisitions and mergers to develop and launch new products. These strategies are likely to propel the ductile iron pipes market during the forecast period. On August 25, 2014, Jindal Tubular USA LLC (Jindal Tubular), a subsidiary of Jindal SAW Ltd., announced that it had acquired the assets of PSL North America LLC for US$ 104 Mn from O.P. Jindal Group. PSL North America LLC is a manufacturer of SAW pipes and steel pipes. The plant has the capacity of producing 300,000 tons of pipes annually. In FY 2016–17, Tata Metaliks commissioned a new casting machine and finishing line through its ductile iron pipes division. This expansion is expected to help meet the demand for small-diameter pipes.

Based on application, the global ductile iron pipes market has been divided into drinking water distribution, wastewater, irrigation, mining, and others (including pump stations and process and treatment works). Ductile iron pipes are mostly used for water distribution. These pipes are primarily employed in wastewater treatment facilities, pump stations, and sewage outfall lines. These pipes are used for effluent discharge of wastewater. Irrigation is a key challenge facing water resources. Approximately 70% of water is consumed for agricultural usage. Thus, irrigation is also a prominent application of the ductile iron pipes market. China, India, and South Africa primarily focus on agriculture. Therefore, the usage of ductile iron pipes is high in these countries for irrigation purposes.

The ductile iron pipes are used as a channel to supply drinking water. Several countries across the globe are currently facing problems with the water that is affecting communities and individual households. In the past few months, the Environmental Protection Agency of the United States has announced the availability of substantial funds to help states with water problems. Such governmental initiatives are expected to improve the wastewater as well as drinking water infrastructure in order to drive the overall development of the global ductile iron pipe market in the coming years of the forecast period. Several developed economies depend upon these underground pipes for continuous supply of water. In addition to this, rising levels of spending on creating high-end and advanced water infrastructure and wastewater treatment systems are expected to help the adoption of ductile iron pipe market.

The market witnessed a sharp plunge in sales and demand during the initial months of the COVID-19 outbreak. The manufacturing plants and production facilities were placed under lockdown affecting the overall revenues of the market. Covid-19 is impacting demand for DI pipes, as result of halted water sewage construction and ceased production activity. Key market regions for DI pipes such as East Asia, North America and South Asia are under nation-wide lockdown to prevent spread of this virus. With a number of government projects for water treatment and water supply management being put on hold, demand for DI pipes is plummeting across the globe.  As an aftereffect of this outbreaks, DI pipes market is expected to lose market share in global pipes industry. However, things are slowly expected to move in the right direction. With the gradual reopening the world economy, the demand for the ductile iron pipe market is set to rise. The growth is expected to be a bit sluggish in the initial months of 2021. However, the market is expected to pick up some pace by the second half of the coming year.

The report comprises detailed value chain analysis, which provides a comprehensive view of the global ductile iron pipes market. The Porter’s Five Forces model for the ductile iron pipes market has also been included to help understand the competition landscape of the market. The study encompasses market attractiveness analysis, wherein diameter and application segments have been benchmarked based on their market size, growth rate, and general attractiveness.

The report provides size (in terms of volume and value) of the ductile iron pipes market for the base year 2017 and the forecast for the period between 2018 and 2026. Market numbers have been estimated based on diameter and application segments. Size and forecast of each major diameter and application segment have been provided in terms of the global and regional markets.