Besides product development, main players in the global drive-by-wire market are also charging ahead through strategic acquisitions, partnerships, and divestments.

Majorly fuelling the market is the increasing number of legislations and mandates by governments, especially in developed nations of Europe and the U.S., seeking to control polluting vehicular emissions. Drive-by-wire technology helps in achieving just that by increasing fuel efficiency by reducing the weight of the vehicle. Rising demand of off-road vehicles is also serving to catalyze demand for drive-by-wire systems. Drive-by-wire or x-by-wire application is increasing in forklifts, harvesters, tractors, construction and mining equipment, industrial electric vehicles, mowers, utility vehicles, and other off-road vehicles. 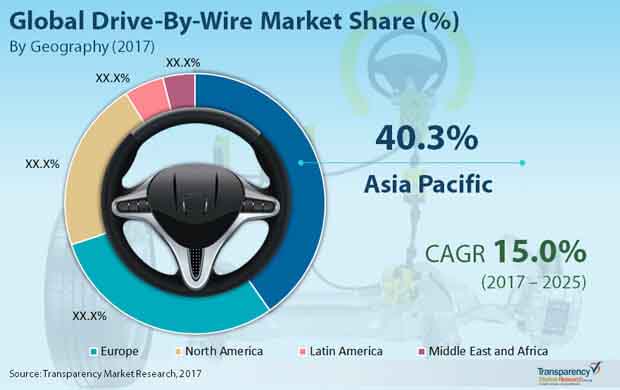 The electronic throttle control segment is predicted to be trailed by shift-by-wire, brake-by-wire, and steer-by-wire technologies market. The shift-by-wire enjoys lesser market share than electronic control system on account of the fact that it caused 121 crashes and 41 injuries which led to vehicle recall in the U.S.

From a geographical standpoint, the global drive-by-wire market is led by Asia Pacific, which at present has maximum share in the market. The growth in the region is primarily being led by Japan, China, Australia, South Korea, and India. Expanding at a CAGR of 15.8% from 2017 to 2025, the region is slated to grow its market share to 42.6% by 2025.

Europe follows Asia Pacific, in terms of market share, in the global drive-by-wire market. Germany, Spain, the U.K, Sweden, Italy, Belgium, France, and Netherlands are said to be powering the growth in the region. Among them, Germany is a leading market on account of having a large automotive market. By rising at 13.5% CAGR, the region is predicted to grow its share to 26.7% by 2025.

Vis-à-vis growth rate, on the other hand, the North America market is slated to overtake all others on the back of the U.S. and Canada, both of which are seeing significant sales in electric vehicles. The region, which currently comes in third, in terms of market share, will likely register a CAGR of 16.0% between 2017 and 2025.

Key factor fuelling growth in the drive-by-wire market is increasing number of mandates in place, especially in developed nations of North America and Europe, to control vehicular pollution. Drive-by-wire technology helps to attain fuel efficiency by reducing the weight of the vehicle.

However, North America is predicted to surge ahead in the drive-by-wire market driven by increasing sales of electric vehicles in the U.S. and Canada.

Drive-by-wire or x-by-wire is an automotive technology that replaces conventional mechanical systems such as throttle control, braking, steering and gear shifting my electronic systems. Generally cables, hydraulic pressure, or other mechanical components are replaced by sensors, electronic control unit, electric motors and actuators, etc. Rising share of electronics or semiconductor value in the total cost of vehicle is increasing the adoption of drive-by-wire technologies. The semiconductor content by value is more in plug-in electric vehicles and pure electric vehicles than conventional vehicles. Increasing in production and sale of electric vehicles and conventional vehicles is increasing the adoption of drive-by-wire or x-by-wire technology.

Rising demand of off-road vehicles is increasing the application of drive-by-wire systems. Drive-by-wire or x-by-wire application is increasing in forklifts, harvesters, tractors, construction and mining equipment, industrial electric vehicles, mowers, utility vehicles, and other off-road vehicles Brake-by-wire and steer-by-wire technologies are commonly used for parking in these types of vehicles.

In off-road vehicles an electronic actuator automatically moves the parking brake when the engine is turned off or while in neutral mode. This helps to hold the position of off-road vehicle in hilly areas. The parking brake is only released when the off-road vehicle starts moving. The electronic parking brake is connected to the vehicle braking system by a cable.A steer-by-wire system has an integrated electronic control unit, embedded software and control area network (CAN) bus interface which replaces the traditional steering column and does not need maintenance service during its lifetime. Two non-contact position sensors are placed in steering wheels which send data to the electronic control unit. Steer-by-wire system also consists of electronic encoders which contain sensors to track steering wheel movement.

Drive-by-wire market has been segmented as follows: