Organic carbonates are gaining increased applicability in various chemical and biotechnical processes, owing to their advantageous attributes. Likewise, dimethyl carbonate is being highly publicized for its versatile chemical reactivity in the production of alternate fuel additives and cleaning agents. Manufacturers in the dimethyl carbonate market are grabbing incremental opportunities by increasing the applicability of DMC as a solvent in the synthesis of polymers, flavoring agents, and pesticides, among others. Moreover, DMC is being used as an electrolyte in lithium-ion batteries, owing to its low toxicity and efficient dissolving abilities.

Companies in the dimethyl carbonate market are increasing their research efforts to innovate in new synthesis technologies. As such, the transesterification of propylene carbonate and methanol to produce dimethyl carbonate is emerging as a mature technology. This technique is playing an instrumental role in the production of fuel additives that help to reduce vehicle emissions, thus preventing the risks of health issues among individuals. 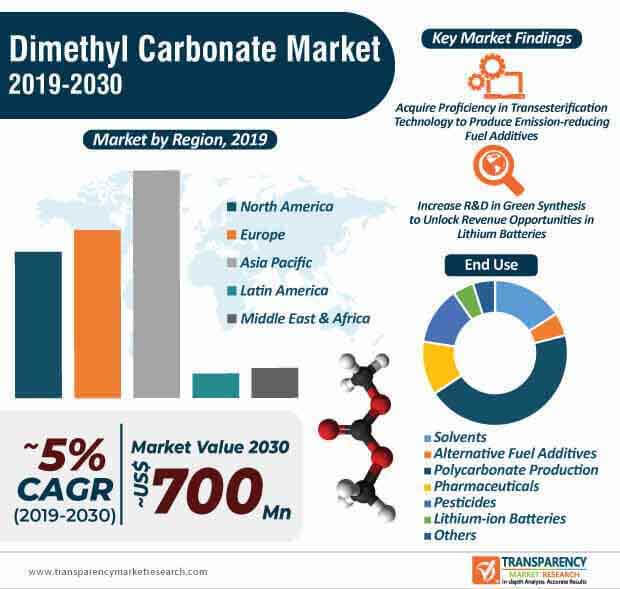 The synthesis of DMC via transesterification of propylene carbonate and methanol holds promising potentials for the production of paints and coatings, owing to its advantages of less waste generation and less equipment corrosion. As such, manufacturers are increasing efforts to develop highly efficient solid catalysts and are increasing focus in new three-phase catalytic distillation technologies. They are innovating in new methods for DMC separation from DMC-methanol azeotrope with low energy consumption.

Carbon is an abundant element and is one of the key elements in fuels and polymers. This has encouraged companies in the dimethyl carbonate market to convert carbon dioxide (CO2) into useful chemicals such as dimethyl carbonate (DMC), owing to the non-toxic attributes of carbon. This trend is anticipated to grow, since traditional processes such as phosgenation involve drawbacks such as the use of highly toxic and corrosive phosgene gas and the formation of large amounts of inorganic salts. Hence, companies in the dimethyl carbonate market are increasing their R&D efforts to gain efficacy in the green synthesis of DMC.

Manufacturers are adopting methods that involve direct synthesis of dimethyl carbonate from CO2 and methanol in order to gain efficacy in green chemistry. As such, green synthesis of DMC is growing popular as a cost efficient method, since methanol is a less expensive raw material. As such, DMC is being used as a precursor for polycarbonate synthesis.

Ongoing developments in the coronavirus (COVID-19) pandemic are negatively impacting the dimethyl carbonate market. The novel virus is disrupting supply chains and affecting the business in China, since Chinese manufacturers are aggressive in polycarbonate and lithium battery production. Due to lockdown situations in most countries that have surging number of COVID-19 patients, manufacturing plants have been temporarily shut down until the infection subsides. As opposed to India, governments have relaxed regulations in orange and green zones. Thus, companies in the India dimethyl carbonate market can re-activate their production activities to minimize the slump in revenue generation.

Manufacturers are adopting contingency plans in order to revive market growth. They are establishing skeleton-size crews to ensure the well-being and safety of workers and employees. Companies are adopting dynamic measures to respond against volatile demands and changing market scenario. 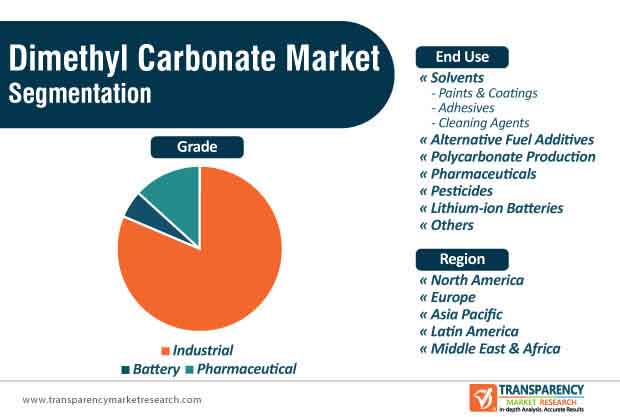 Looking for Regional Analysis or Competitive Landscape in Dimethyl Carbonate Market, ask for a customized report

The COVID-19 outbreak has caused a slowdown in the production of polycarbonates and lithium-ion batteries in China. As such, more than 50% of the DMC in China is being produced via green synthesis of propylene carbonate (PC) and methanol to comply with environmental regulations. Manufacturers are increasing focus in several types of ionic liquids that play an instrumental role in the synthesis of DMC.

Rise in Demand for Dimethyl Carbonate in Various End-use Applications

Transparency Market Research’s recent report on the global dimethyl carbonate market, with the help of a comprehensive outlook, provides readers with an assessment of the global market landscape. This study of the global dimethyl carbonate market analyzes the market scenario for the period from 2020 to 2030, wherein 2019 is the base year. The report enables readers to make important decisions with regard to their business, with the help of a wealth of information enclosed in the study.

This TMR study on the global dimethyl carbonate market also provides data on developments made by important players and stakeholders operating in the market, along with a competition analysis. The report also provides an understanding of strengths, weaknesses, threats, and opportunities, along with market trends and restraints.

This study also discusses the underlying trends and impact of various factors that are driving the global dimethyl carbonate market, along with their influence on evolution of the market.

This study also offers Porter’s Five Forces analysis, PEST analysis, and regulatory scenario of the global dimethyl carbonate market in order to elaborate on crucial growth tactics and opportunities for players operating in the global market.

This report answers these questions about the global dimethyl carbonate market, aiding major stakeholders and key players in making correct decisions and strategizing for expansion of their business.

This report uses an analytical triangulation method to estimate numbers of the global dimethyl carbonate market, with the help of both bottom-up and top-down approaches.

This report on the global dimethyl carbonate market provides information based on grade, end use, and region.