Diamond-like carbon or commonly known as DLC, includes carbon items with sp3 bonding. It contains various useful properties including chemical inertness, mechanical hardness, and optical transparency. DLC is gaining the attention of various industries due to its widely applicable properties and continues to attract investments worldwide through research. Currently it is in heavy demand for razor blades, magnetic hard disks, invasive and implantable medical devices, scratch-resistant glasses, and mechanical face seals. DLC includes various chemical elements such as hydrogen, sulphur, silicon, fluorine and titanium. This makes it an essential ingredient in manufacturing for a wide variety of applications.

DLC’s micro-structures make up for its tribological properties. These micro-structures include the volume of hydrogen present, and sp2 to sp3 carbon atoms ratio.  There are two main types of DLCs in the market. These two types are pure DLC and mixed DLC. 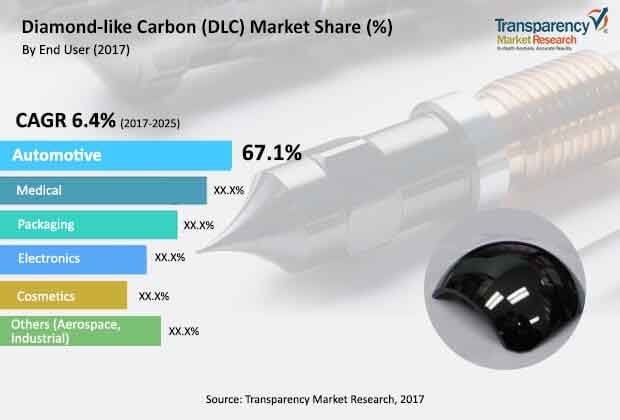 The global diamond-like carbon market is expected to be driven by growing demand for the product in automotive engine components. DLC coatings serve a useful purpose in automotive tappets, differential gears, diesel fuel injectors, valve lifters, door hinges, and wrist pins. Friction can reduce the life of these important automotive components as well as reduce their usefulness with rusting. DLC coating provides an important protective shield and often provide appealing décor in a cost-effective manner. Additionally, DLC coating improves lubrication by reducing friction. Consequently, it improves the efficiency of vehicles for all stakeholders. Advancements in DLC coating including high abrasion resistance is expected to further boost the Diamond-like Carbon market during the forecast period.

Due to DLC’s high biocompatibility, the demand for it is also high in the medical industry. It is expected to become a key factor for driving growth in the diamond-like carbon market. The DLC offers various benefits to the medical industry including low friction, bio-inert characteristics and, exceptional brittleness. These qualities help stop the leakage of metallic ions to body parts. Hence, DLC is extremely helpful in orthopedics surgeries as well as regular therapy. It also offers various benefits to cardiovascular treatments, guide wires, etc. These reasons are expected to help the diamond-like carbon market growth during the forecast period.

Emission of carbon dioxide is reportedly a major reason for global warming. DLC coating involves the layer of carbon atoms. It can combine with oxygen and release carbon dioxide in the atmosphere. The stringent regulations governing the automotive industry and keeping carbon dioxide in check can hamper growth of the diamond-like carbon market. Lack of strong adhesive abilities of DLC can further contribute to the impact on the market in Europe and North America. Major players situated in these regions are investing in ultrathin layer coating technologies. Its growing advancement can bring good news for the market during the forecast period.

Hydrogen-free DLC is generally utilized by number of end-use enterprises because of its unbending nature and wear obstruction when contrasted with DLC that is joined with hydrogen. In the car area hydrogen-free, DLC covering consolidates fittingly with the motor oil, which brings about framing solid super dainty film when extraordinary oil added substances are applied. Low grinding factor and progressed scraped area obstruction are expanding the interest for the DLC market. Makes in biomedical and car industry are intending to utilize hydrogen-free DLC for compelling working. Furthermore, inventive advancements, for example, beat laser testimony and plasma improved CVD are required to trigger the market for DLC.

A key factor boosting the global diamond-like carbon market is the increasing demand for engine components used in the automotive industry. DLC coatings fill a valuable need in car tappets, differential cog wheels, diesel fuel injectors, valve lifters, entryway pivots, and wrist pins. Grinding can diminish the existence of these significant auto segments just as lessen their handiness with rusting. DLC covering gives a significant defensive shield and frequently give engaging stylistic theme in a savvy way. Furthermore, DLC covering improves oil by decreasing erosion. Subsequently, it improves the proficiency of vehicles for all partners. Headways in DLC covering including high scraped area obstruction is relied upon to additional lift the Diamond-like Carbon market during the estimate time frame.

Major manufacturers of the global market for diamond-like carbon are trying to control the issue of environmental degradation as carbon dioxide emission is a key reason contributing to global warming. Players are investing in development and advancement of ultrathin layer coating technologies to gain an upper hand in the overall market competition. Companies dealing with the biomedical and automobile industry are intending to utilize sans hydrogen DLC for successful working. Moreover, imaginative innovations, for example, beat laser affidavit and plasma upgraded CVD are relied upon to trigger the market for DLC.

Diamond-like carbon (DLC) is primarily employed in advanced coating applications due to its tribological properties such as high hardness, wear resistance, and abrasive power. Two major types of DLCs are available in the market: pure DLC and mixed DLC. DLCs are largely used in automotive and medical end-use industries. DLC based materials with special wettability have been successfully employed in the development of superhydrophilic and superhydrophobic surfaces. This has led to improved performance as well as durability. DLCs are used to coat auto parts in the automotive industry, while they are used to coat surgical devices in the medical industry.

Different types of DLC coatings are used to provide a wide range of mechanical properties. Tetrahedral amorphous carbon (ta-C) is the hardest, thin, and glossy form of DLC. Coatings based on DLC can be extremely hard and give low coefficients of friction. Properties of DLC can be evaluated by the nano-indentation method, scratch and wear, and friction testing. Advanced microscopic technologies such as scanning electron microscopy (SEM) and atomic force microscopy (AFM) can be employed for the evaluation of the mechanism of deformation. DLC coating can be produced through advanced deposition technologies such as PVD (Pulsed Vapor Deposition) and CVD (Chemical Vapor Deposition). These advanced technologies include sputtering, cathodic arc deposition, pulsed laser deposition, ion beam deposition, and plasma enhanced chemical vapor deposition.

Constant research activities in automotive, electronics, and medical industries is likely to create new opportunities for DLC manufacturers. According to the RoHS guidelines, medical device manufacturers are focusing on moving toward greener engineering technologies such as DLC coating materials, as these are biocompatible and can work in a wide range of temperatures.

The report analyzes and forecasts the market for DLC at the global and regional level. The market has been forecast based on revenue (US$ Mn) from 2017 to 2025. The study includes drivers and restraints of the global DLC market. It also covers the impact of these drivers and restraints on demand for DLC during the forecast period. The report also highlights opportunities in the DLC market at the global and regional level.

The report comprises a detailed value chain analysis, which provides a comprehensive view of the global DLC market. Porter’s Five Forces model for the DLC market has also been included to help understand the competitive landscape. The study encompasses market attractiveness analysis, wherein end-users are benchmarked based on their market size, growth rate, and general attractiveness.

The study provides a decisive view of the global DLC market by segmenting it in terms of type, application, end-user, and region. These segments have been analyzed based on the present and future trends. Regional segmentation includes the current and forecast demand for DLC in North America, Europe, Asia Pacific, Latin America, and Middle East & Africa. The report also covers demand for individual end-user segments in all the regions.

The report provides the estimated market size of DLC for 2016 and forecast for the next nine years. The global size of the DLC market has been provided in terms of revenue. Market numbers have been estimated based on type, application, end-user, and region. Market size and forecast for each major type, application, and end-user have been provided in terms of global and regional markets.

The DLC Market has been segmented as follows: