Depression today has emerged as a ‘silent killer’ in several regions around the world, particularly in urban cities. The prevalence of depression continues to grow at a rapid pace and has considerably high mortality and morbidity rate due to which, the healthcare sector continues its pursuit for novel medications and therapies. At present, tricyclic antidepressants, selective serotonin reuptake inhibitors (SSRIs), serotonin and norepinephrine reuptake inhibitors (SNRIs), and atypical antidepressants among others. Although these drugs have proved to be highly effective, a large number of patients have reported side effects or have not responded to these drugs in the required manner.

However, advancements in the neurobiology of depression over the past few years have opened up new avenues for antidepressant treatment. In addition, in the current depression drugs market, market participants are increasingly focusing on the development of novel non-pharmacologic and pharmacologic interventions. Research and development activities are expected to continue in full swing during the course of the forecast period. In addition, several drug developers are increasingly pinning their hopes to establish a strong presence in the depression drugs market landscape on the FDA to approve their products.

Research and Development Activities to Remain Key for Market Growth

Major depressive disorder (MDD) continues to remain one of the leading causes of disability around the world. Conventional medications and methods to address depression have repeatedly exhibited a low success rate and are reportedly effective for ~40% patients. These factors have compelled researchers, scientists, and drug developers to explore new pathways that are likely to increase the efficacy of the treatment for major depressive disorder. Research and development activities are likely to influence the overall growth of the depression drugs market. Several research projects around the world are increasingly contributing to the development of novel medications, drugs, and therapies.

For instance, a team of researchers at the Icahn School of Medicine at Mount Sinai, are studying the interleukin-6 molecule– a protein that primarily facilitates communication between different cells. As per the research, individuals suffering from depression have higher levels of IL-6. Another aspect of the research primarily focuses on ezogabine– an anticonvulsant drug that offers immense promise in minimizing symptoms of depression, including low motivation, lack of interest, and inability to feel pressure, among others. 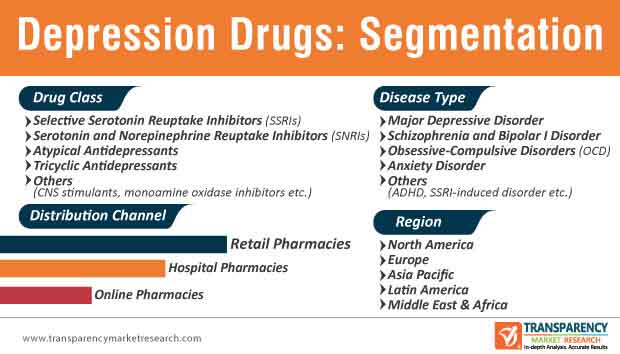 To date, severe depression is largely treated with tricyclic anti-depressants– a class of drugs that is more effective than other classes of drugs used to address mild to moderate depression. However, the demand for tricyclic anti-depressants is gradually expected to decline due to the side effects associated with them. However, in March 2020, a group of researchers from the University of Copenhagen in collaboration with the National Institutes of Health in Baltimore and Lundbeck A/S has revealed that the team has discovered a potential drug that is likely to ease the side effects of medication that is used to address severe depression.

Conventional classes of drugs, including monoamine oxidase inhibitors and tricyclic antidepressants have remained popular in the depression drugs market over the past three decades. Over time, the uptake of serotonin reuptake inhibitors, first-generation antipsychotics, and various modern forms of psychotherapy has increased at a rapid pace. Although several pharmaceutical companies have gradually refrained from investing resources in research activities due to continual failure of several trials, several market operators have pinned their hopes on ketamine and various other emerging psychiatric medications. The future of the mental health treatment sector primarily depends on two major factors– investments for drug development & clinical trials and approval from the FDA.

The onset of the novel COVID-19 pandemic is expected to have an impact on the overall growth of the depression drugs market, as a large number of individuals suffering from mental health conditions is increasingly leaning toward prescription drugs such as benzodiazepines and antidepressants. In addition, as governments in several nations have imposed lockdowns as a preventive measure to contain the transmission of the novel coronavirus, the demand for antianxiety medications has witnessed a considerable growth. The number of prescriptions for antidepressants witnessed a noteworthy growth during the first two quarters of 2020 and the trend is likely to continue in the next two quarters of 2020.

The global depression drugs market is expected to grow at a sluggish CAGR of ~2% during the forecast period. Much of the market growth can be attributed to ongoing research and development activities, development of novel non-pharmacologic and pharmacologic interventions, increase in the number of collaborations between research institutes and pharmaceutical companies, and most importantly the growing prevalence of mild to severe depression around the world. Market players should focus on improving the effectiveness of their drugs, along with minimizing the side effects of the same.

Surge in Awareness about Depression

The report includes an elaborate executive summary, along with a snapshot of the growth behavior of various segments included in the scope of the study. Furthermore, the report sheds light on changing competitive dynamics in the global depression drugs market. These serve as valuable tools for existing market players as well as for entities interested in participating in the global depression drugs market.

The comprehensive report on the global depression drugs market begins with an overview, followed by the scope and objectives of the study. Following this, the report provides detailed explanation of the objectives behind this study and key vendors and distributors operating in the market and regulatory scenario for approval of products.

For reading comprehensibility, the report has been compiled in a chapter-wise layout, with each section divided into smaller sections. The report comprises an exhaustive collection of graphs and tables that have been appropriately interspersed. Pictorial representation of actual and projected values of key segments is visually appealing to readers. This also allows comparison of market shares of key segments in the past and at the end of the forecast period.

The report analyzes the global depression drugs market in terms of drug class, disease type, distribution channel, and region. Key segments under each criteria have been studied at length, and the expected market share for each of these at the end of 2030 has been provided. Such valuable insights enable market stakeholders to make informed business decisions for investment in the global depression drugs market.