As per market analysts, blood coagulation testing market is anticipated to grow at a lucrative rate due to development of healthcare infrastructure coupled with increased healthcare expenditure.

Meanwhile, nowadays people are involved in preventive healthcare rather than proactive healthcare. Hence, people are undergoing medical tests periodically.  This, in turn, is fuelling the demand for haemostasis analyzers.

Registering the trend, the players are also focussing on providing quality testing kits.

Moreover, rapid expansion of healthcare infrastructure in developed and emerging economies is one of the key driving factors aiding to growth of the market. Availability of advanced coagulation testing kit, with ability to conduct tests with high accuracy is another major driving factor.

Favourable government policies favouring best healthcare delivery in several region is promoting the use of such kits.

On the other hand, high cost of such devices is likely to limit adoption rate. Further, strict regulations for approval of testing devices are restraining the growth of the market.

However, rising demand for disposable coagulation testing equipment is presenting lucrative growth opportunities in near future.

Distribution channels are playing significant role in expansion of the coagulation testing market. The kit is easily available at offline drug stores. Meanwhile, emerging e-commerce platforms is enhancing visibility of the product.

Cost-effectiveness and highly reliable kits are likely to spur the market growth in coming years.

Blood testing measuring the blood’s ability to clot and the time taken for the same is known as coagulation testing. Clotting disorders can cause excessive bleeding or clotting and can thus be fatal in either scenario. Coagulation testing is ordered if the physician suspects clotting disorders. There are a number of bleeding disorders which are either acquired or inherited, the most common among them being hemophilia, blood factor deficiency, etc. 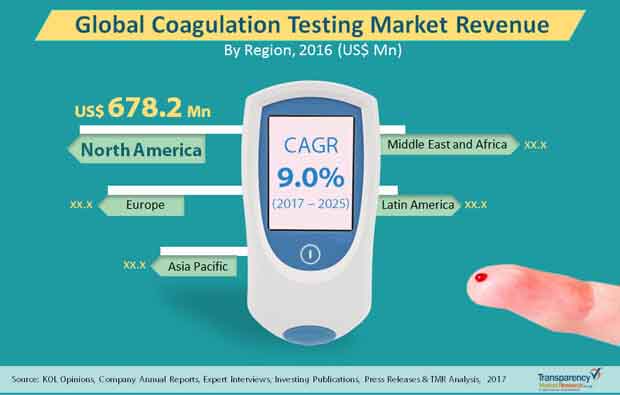 Geographically, North America and Europe are the major regions where revenue is derived from coagulation testing. The U.S., the U.K., and Germany show high adoption rates of coagulation testing instruments such as analyzers, POC testing PT monitors, etc. due to rise in awareness amongst people about the importance of detecting and monitoring their coagulation status, high prevalence of cardiovascular diseases, and the availability of a favorable reimbursement scenario. The coagulation testing market is likely to be valued at more than US$1 bn in both North America and Europe by 2025, with the two being valued at US$678.2 mn and US$569.2 mn in 2016, respectively.

In order to provide users with comprehensive view of the market, we have included detailed competitive analysis and market players with unique selling propositions. The competitive dashboard included in the report provides detailed comparison of coagulation testing manufacturers on parameters such as product offerings, revenue, key strategies, and recent developments. The study encompasses market attractiveness analysis, by product type, by test type, by end users and region.

Global Coagulation Testing market is segmented as below: