Chemical mechanical polishing/planarization (CMP) slurries are abrasive materials, also called non-crystalline inorganic oxides, which are dispersed in water blended with other chemicals and used in CMP processes for semiconductors. CMP process is employed in semiconductor manufacturing, where surfaces of wafers are smoothed and leveled with the help of abrasive slurries. This process is critical for precise lithography patterning, and is utilized after every deposition-etch step. 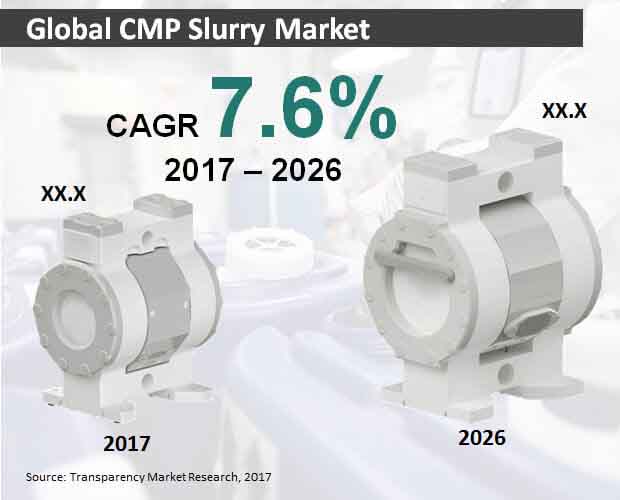 Leading CMP slurry producers are identifying requirements for new as well as additional CMP steps, and are delivering new slurry solutions that offer exceptional defectivity and planarization in a stable CMP process. These producers are increasingly investing in R&D for achieving advanced performance, at the same time making the process cost-effective with the help of low point-of-use concentrations of abrasives, exceptional process consumable lifetime, and high removal rates. As the industry continues to witness accelerated growth, new innovations are being made in CMP slurries, which are likely to help realize success at advanced nodes in next-generation manufacturing. The global CMP slurry market will represent a splendid expansion throughout the forecast period, 2017 to 2026, according to a recently developed report of Transparency Market Research (TMR). Roughly US$ 3,500 Mn worth of CMP slurries are estimated to be sold across the globe by 2026-end.

Countries in Asia-Pacific excluding Japan (APEJ), such as South Korea, India and China, are making considerable investments in semiconductor manufacturing to cater the significant demand growth in consumer electronic products. In addition low waged labor has resulted into a rise in global export from these countries. APEJ is projected to be the fastest growing market for CMP slurry through 2026. In addition, APEJ will account for the largest revenue share of the global CMP slurry market throughout the forecast period. North America is expected to be the second largest market for CMP slurry by 2026-end.

On the back of fast surging number and spurred diversity of non-metal chemical mechanical polishing/planarization (CMP) steps, there is a rise of new requirements such as near-zero level defectivity, substantial reductions in the cost of process versus previous device nodes, and enhanced planarization efficiency. High dilutable and tunable CMP slurries in coordination with matched CMP processes and pads are required for achieving both economic and technical objectives. Semiconductor manufacturers are now depending upon strong collaboration with material suppliers for identifying or developing slurries that cater these stringent and specific requirements.

Transparency Market Research has developed a new report on the global CMP slurry market, and provides insights on future market growth over the forecast period, 2017 to 2026. The report analyzes the global CMP slurry market in detail, and engulfs key market dynamics comprehensively. Along with the provision of information on propelling factors, restraining factors, and trends guiding the market expansion, analysis on data across multiple market parameters is offered in the report to attain significant market numbers associated with CMP slurry.

In its proceeding chapter, the report examines the global CMP slurry market in terms of a segmentation-wise analysis. The market has been segmented into product type, application, and region. Y-o-Y growth comparison, along with revenue and market share comparison of these segments have been incorporated in this chapter, for delivering the most significant numbers regarding the segmentation-wise analysis. Global CMP slurry market is categorized regionally into Latin America, Japan, North America, Europe, Middle East & Africa (MEA), and Asia-Pacific excluding Japan (APEJ).

The report gives a scrupulous analysis on competition landscape of the global CMP slurry market, and incorporates information about active industries that are contributing to the market expansion. Occupancy of players in the market is portrayed through an intensity map. This culminating chapter emphasizes on identifying key market players rigorously, and provides insights about these players based on the product overview, SWOT analysis, company overview, key financials, and key developments made by the players. This weighted chapter is invaluable for readers of the report, as it submits all necessary information apropos to market participants, and the novel strategies they employ for staying at the market’s front edge.

An extensive research methodology is utilized by TMR’s analysts for developing market research reports, and delivering accurate forecasts and insights pertaining to the intended process or product. This research methodology employed relies entirely upon primary & secondary researches, to achieve necessary information on global CMP slurry market. The analysts then validate the information harnessed, for ensuring its authenticity and authoritativeness to clients.