Canned fish refers to those fish products that are processed and then sealed into an airtight container, such as tin containers and then it is subjected to heat. Canning refers to a procedure of food preservation and offers a shelf life of around one to five years. Fish comes with low level of acidity and at this level microbes can flourish. The growth of the global canned tuna market is likely to be shaped by the increased sales of the product at various channels of sales, both online and offline.

Five types of commercial tuna species are available in the market. Those types are as follows

Increased Sales through Supermarkets and Foodservice Outlets to Boost Demand

The canned tuna products are increasingly being sold at various foodservice outlets and supermarkets, which is likely to amplify growth prospects of the global canned tuna market in the years to come. Canned tuna finds increased use in tuna sandwiches or delis, thereby driving the demand for the product. Most of these canned tuna are either a mix of yellowfin tuna and skipjack or albacore. Small amounts of yellowfin tuna and significant amount of skipjack make up “Light tuna”, which is an economically priced product and accounts for a large chunk of the global canned tuna market. This product is an immensely popular canned product in the US and account for most of the canned tuna sales in the US.

So far, the only species authorized to be labeled “white meat tuna” in the US is Albacore tuna. Canned tuna is a rich source of various essential nutrients, such as Vitamin D, selenium, high quality protein, and omega-3 fatty acids. Plentiful presence of so many nutrients is likely to propel growth of the global canned tuna market in the forthcoming years.

Although lifestyles of consumers worldwide are getting busier and faster, and the market offers an extensive range of prepared and frozen food, the global market for canned tuna is projected to experience passive growth over the next few years. Growing consumer dependency on prepared and ready-to-eat food is considered to be a key driver to push the demand for canned tuna a little farther over 2017-2025. Global revenue of canned tuna market was around US$ 10,496.1 Mn in 2017, which is expected to increase at a CAGR of 3.8% over the forecast period, reaching a value worth US$ 14,125.5 Mn by the end of 2025. 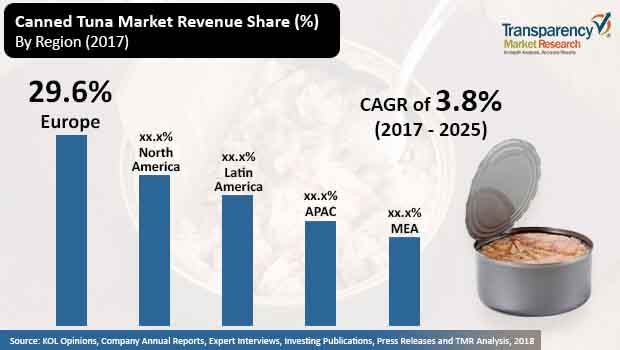 While consumer demand for canned tuna witnesses a downward trend, the increasing demand from the Middle East is leveling off this decline, and emerging as an attractive market for ASEAN canned tuna exporters. The exemption from import duties in the Middle East has led to higher exports in this region. Egypt, Saudi Arabia, and Israel are the largest importers of tuna in the Middle East, accounting for 21%, 19%, and 11% import share, respectively. The import tariff in most of the countries in this region is only 5%, which is very low as compared to the U.S. and the EU. In spite of the large scope for fishing, the Middle Eastern region is poorly developed in fishing, and is thus heavily dependent on imports from ASEAN countries, especially Vietnam.

On the basis of region, the market in Europe is anticipated to dominate the global canned tuna market both in terms of value and volume in 2017. North America is expected to gain significant market share in revenue terms by 2025 end. This trend is attributed to the consumer dependence on canned tuna as demand for processed and ready-to-eat food is growing in this region. Moreover, BENELUX is projected to exhibit significant CAGR in terms of value during the forecast period.

Overfishing has led governments to ban commercial fishing in specific parts of the Pacific Ocean. The ban on fishing has led to curtailed supply of tuna, consequently leading to higher prices of canned tuna. Higher prices have, in turn, led to lower demand for canned tuna from regions such as Europe. Tuna species such as yellowfin are overfished and have already been categorized as an endangered species. Concerns against overfishing are growing, leading to the fluctuating supply and demand of canned seafood, globally.

In the U.S., the canned seafood market is also indicating a clear downward trend due to the lack of sustainable and regular supply of its main product. Consumers in the U.S. and Europe are highly concerned about dolphin deaths caused due to tuna fishing. A vast number of dolphins have been killed during tuna fishing, and consumers are averse to buying products that have resulted in the deaths of this large by catch. Consumer sensitivity towards the sustainability of canned tuna dictates the growth of the market. The dolphin safety issue has been trending in the canned tuna market over the past many years and is still a major obstacle being blamed for the decline of the canned tuna market.

This report provides forecast and analysis of the global Canned Tuna market. It provides historical data of 2015 along with estimated data of 2017, and forecast data up to 2025 in terms of revenue (US$ Mn). The report also includes macroeconomic indicators along with an outlook on Canned Tuna for global market. It includes drivers and restraints of the global Canned Tuna market and their impact on each region during the forecast period. The report also comprises the study of current issues with consumers and opportunities for Canned Tuna products. It also includes value chain analysis.

In order to provide users of this report with comprehensive view of the market, we have included detailed competitiveness analysis and market key players and strategy overview. The dashboard provides detailed comparison of Canned Tuna manufacturers on parameters such as total revenue, product offerings, and key strategy. The study encompasses market attractiveness analysis by species type, distribution channel, end-use and region.

The report includes Canned Tuna market company profiles and the revenue generated from the companies across North America, Latin America, Europe, APAC, and MEA. By species type, the global Canned Tuna market is segmented as albacore, yellowfin tuna, skipjack tuna, Bluefin tuna, bigeye tuna and longtail tuna. By distribution channel, the market is segmented as direct and indirect. Furthermore, by end use, the market is segmented as foodservice and households. For the calculation of revenue collection of average regional prices were obtained through primary quotes from numerous canned Tuna manufacturers, retailers and distributors. All key end users have been considered and potential applications have been estimated on the basis of secondary sources and feedback from primary respondents.

Country demand patterns have been considered while estimating the market for various end users of canned tuna in the different regions. Top-down approach has been used to estimate the canned tuna market by countries. Global market numbers by species type has been derived using the bottom-up approach, which is cumulative of each country’s demand. Company-level market share has been derived on the basis of canned tuna penetration. The market has been forecast based on constant currency rates.

The Canned Tuna market has been segmented as follows