Calcium formate is one of the numerous organometallic compounds and an additive produced to significantly enhance the qualities and properties of tile adhesives. Calcium formate has its wide uses in non-aqueous solubilities such as solar energy and water treatment applications. The availability of calcium formate is in abundance and can be conveniently bought in major volumes and bulk quantities. In a role of additives, calcium formate prolongs open time, improves adhesions, and is a highly efficient strength accelerator. The compound has various uses in several industries, which makes its demand steady in the global calcium formate market. The compound is used in many products, including adhesives and sealants, fillers, putties, plasters, modeling clay, and fertilizers. Moreover, calcium formate is also extensively used for indoor use such as in machine wash liquids, detergents, automotive care products, paints and coating or adhesives, fragrances, and air fresheners. Outdoor uses of these compounds extend to metal, wooden & plastic construction, and building materials. 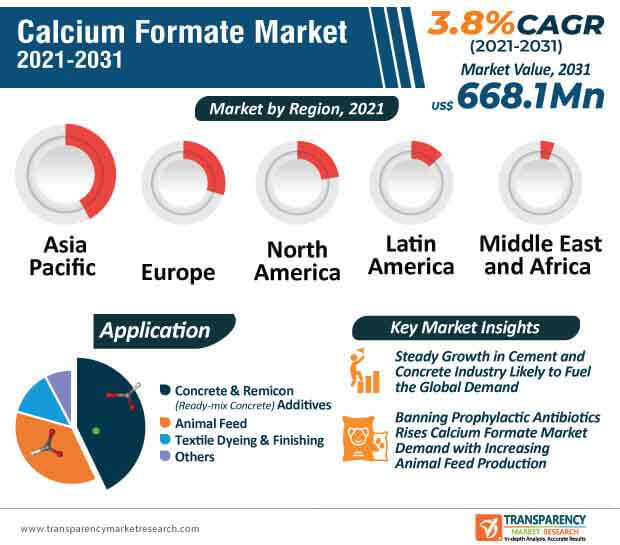 Calcium formate is presently approved for use as a preservative in feed for all animal species. However, it is not authorized as a food additive in Europe. The ruminal and intestinal contents and manure use formate as a natural constituent. The study on the tolerance with chickens and cattle for fattening by feeding the species at concentrations greater than that proposed displays no adverse effects on the safety of the species. The same studies have been proven safe on the feed for pigs, poultry, fish, and ruminants. However, the addition of calcium formate to the calcium supply of animals should be examined when formulating diets. As the use of calcium formate as a feed additive in all animal species is considered safe for the consumer, the calcium formate market is expected to grow during the forecast period.

The COVID-19 crisis had a major impact on almost every industry, owing to stringent worldwide regulations to contain the spread of coronavirus. The long-term effects of such a crisis are predicted to dwindle the calcium formate market during the forecast period. The ongoing research amplifies the research framework to ensure the inclusion of underlying COVID-19 issues and potential paths forward. The advent of COVID-19 has confused the situation by depressing the steel agrochemical, animal feed, and others with disrupted existing supply chains. Measures introduced to deal with the crisis such as lockdowns, limited trade activities, and temporary closure of various factories and workplaces in several countries are expected to save lives. These measures proved to be a negative economic impact, influencing economic failures. Essential sections of manufacturing have been closed in various countries across the globe, in response to lockdown orders issued by authorities in such countries and the postponement of public transport services in many places across the globe.

The global industries have experienced a shortage in supply of raw materials such as formic acid, calcium hydroxide. This has resulted in a critical demand-supply gap. Producers are expected to be stranded on raw material quantities due to the limited functioning of logistics and trade. Furthermore, the growth in chemical, animal products, and utility businesses has been principally managed by efficiency profits and increased reliability. However, the disruptions caused by the pandemic have affected various end users limiting the demand for calcium formate presently, which can affect future growth. Post-COVID-19, it is expected to slowly overcome the demand gap as several end-use industries will desperately try to flatten the curve. Moreover, the increase in the demand for animal feed during the pandemic is boosting the calcium formate market during the forecast period.

The calcium formate market is expected to witness heavy demand as feed additives for animals in the upcoming years. This can be attributed to the health-enhancing regulation for animal feed from various governments across the world. A healthy feed is beneficial for the animal digestive system, which has influenced the increasing demand for additives and preservatives to produce healthful growth of livestock. Additionally, the growing meat and dairy segment is increasing the demand for animals and animal feeds, generating new opportunities for the calcium formate market. In addition, the demand for meat products in the Asia Pacific has been increasing at a rapid pace with the rise in meat consuming population. The Asia Pacific is expected to be a highly lucrative region for the calcium formate market during the forecast period.

Rising disposable income of people, reducing interest rates, and increasing migration are influencing the growth in the construction industry. This is most likely to fuel the demand for cement additives proving propitious for the global calcium formate market. However, the volatility in the prices of other raw materials in construction can possess major challenges in the calcium formate market. Furthermore, high-energy expenditure and low process performance result in increased production costs. Therefore, calcium formate manufacturers tend to look for effective options to cut down the production expense and increase profit margins. This is likely to hamper the market growth. Nevertheless, the global calcium formate market is expected to reach ~US$ 700 Mn by 2031, expanding at a CAGR of 4% during the forecast period.

Looking for Regional Analysis or Competitive Landscape in Calcium Formate Market for Performance OEM , ask for a customized report

The demand for industrial-grade calcium formate has been increasing steadily. Post-COVID-19, it is expected to create lucrative opportunities for the global calcium formate market with end users attempting to flatten the expense curve. In addition, developing countries such as China, India, and Japan are growing their production with increasing consumption rates. Thus, they are most likely to be major consumers of calcium formate in the upcoming years. The growing population and meat demand in the Asia Pacific region is likely to dominate the regional segment during the forecast period.

This study covers a detailed segmentation of the global calcium formate market, along with key information and a competition outlook. The report mentions company profiles of players that are currently dominating the global calcium formate market, wherein various development, expansion, and winning strategies practiced and implemented by leading players have been presented in detail.

The report provides detailed information about the global calcium formate market on the basis of comprehensive research on various factors that are playing a key role in accelerating the growth potential of the global market. Information mentioned in the report answers path-breaking questions for companies that are currently operating in the market and are looking for innovative methods to create a unique benchmark in the global calcium formate market, so as to help them design successful strategies and make target-driven decisions.

The research methodology adopted by analysts for compiling the global calcium formate market report is based on detailed primary as well as secondary research. With the help of in-depth insights of the market-affiliated information that is obtained and legitimated by market-admissible resources, analysts have offered riveting observations and authentic forecasts for the global calcium formate market.

During the primary research phase, analysts interviewed market stakeholders, investors, brand managers, vice presidents, and sales and marketing managers. Based on data obtained through interviews of genuine sources, analysts have emphasized the changing scenario of the global calcium formate market.