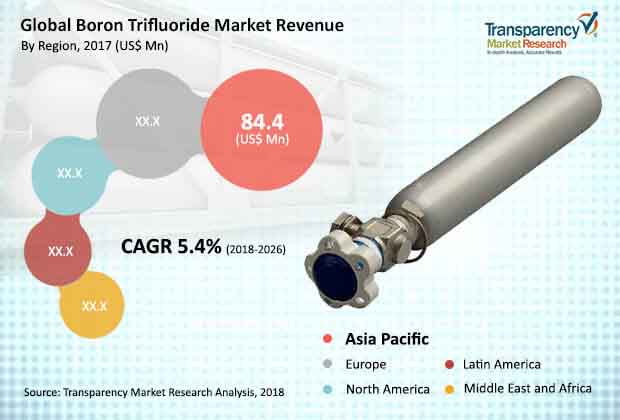 BF3 gas is largely used as a catalyst in several chemical reactions such as polymerization of olefins, diolefins, vinyl ethers/esters, heterocyclic unsaturated organic compounds, unsaturated acids, and terpene derivatives; Friedel-Crafts reactions; isomerization of paraffins and unsaturated hydrocarbons; and cyclization reactions. BF3 catalysts are also employed in the alkylation of aromatic hydrocarbons and phenols with olefins and alcohols. They are also used in chemical synthesis of acetals and ketals, indoles, alpha-methoxymercurials, steroids and intermediates, and hydroxyl fatty acids. In the chemical reactions mentioned above, BF3 acts as a versatile catalyst, which helps improve the efficiency and yield of the process, and quality of end-products. It also lowers production costs. As a result, BF3 gas is employed in several end-use industries such as polymers & plastics, chemicals & petrochemicals, semiconductors & electronics, and pharmaceuticals. Chemicals & petrochemicals is the leading consumer of BF3. The usage of BF3 as a catalyst in the chemical industry has been rising. This is expected to propel the demand for BF3 in the near future.

Boron trifluoride is irritating to the skin, eyes, and mucous membranes. It also leads to chemical and thermal burns. These burns are caused by the formation of strong acids, such as fluoroboric acid, due to the reaction of BF3 with moisture. There are high chances of the occurrence of chemical and thermal burns if BF3 gas is released in the atmosphere under normal working conditions, as it is a strong Lewis acid with high affinity toward chemicals and atmospheric gases possessing electron pair donors. Furthermore, inhalation of BF3 gas is highly suffocating and irritating to the respiratory system. Prolonged exposure to the gas can lead to acute toxic effects. Thus, utmost care needs to be taken by workers involved in daily handling of the gas. In view of this, several government regulatory authorities have imposed restrictions on the usage and transport of BF3. The permissible exposure limit established by the U.S. Occupational Safety & Health Administration (OSHA) is 1 ppm (3 mg/m³), which has also been confirmed by the American Congress of Governmental Industrial Hygienists (ACGIH) as airborne Threshold Limit Value (TLV). Exposure to any level above this value is allowed only with proper respiratory and other protective equipment. Transportation of BF3 gas, especially vast quantities of the gas over long distances, is a tedious task. These factors are anticipated to hamper the boron trifluoride market in the near future.

Boron trifluoride is a drab gas with an impactful smell. It is harmful by inward breath. It is solvent in water and gradually hydrolyzed by chilly water to emit hydrofluoric corrosive, a destructive material. Its fumes are heavier than air. Drawn out openness of the holders to fire or warmth may bring about their savage bursting and soaring. Boron Trifluoride (BF3) is a non-combustible packed gas that is utilized as an acidic impetus or co-impetus in a fluctuating cluster of natural combination responses, for the assembling of engineered oils and grease added substances and in the creation of high-virtue boron isotopes. It is one of the most grounded Lewis acids (an electron-pair acceptor) responding promptly with synthetic compounds containing oxygen, nitrogen, sulfur, and other electron-pair givers. Boron Trifluoride (BF3) can be found in a few applications. As a solid Lewis corrosive, BF3's synergist properties are utilized for such responses as alkylation of sweet-smelling hydrocarbons, polymerization of phenolic and epoxy tars alongside other isomerization, esterification, and buildup responses.

Decrease in the utilization of sulphuric corrosive and oleum as crude materials in the assembling of boron trifluoride has been a new pattern concerning mechanical turns of events. Manageable interest for green items is assessed to fuel the worldwide boron trifluoride and buildings market in the coming years.

BF3 impetuses are likewise utilized in the alkylation of sweet-smelling hydrocarbons and phenols with olefins and alcohols. They are likewise utilized in substance union of ketals and acetals, hydroxyl unsaturated fats, alpha-methoxymercurials, intermediate and steroids, and indoles. In the substance responses referenced above, BF3 goes about as a flexible impetus, which improves the effectiveness and yield of the interaction, and nature of final results. It likewise brings down creation costs. Thus, BF3 gas is utilized in a few end-use ventures like polymers and plastics, synthetic substances and petrochemicals, semiconductors and gadgets, and drugs. Synthetic substances and petrochemicals is the main customer of BF3. The use of BF3 as an impetus in the compound business has been rising. This is required to impel the interest for BF3 sooner rather than later.

The report comprises a detailed value chain analysis, which provides a comprehensive view of the global boron trifluoride market. Porter’s Five Forces model for the boron trifluoride market has also been included to help understand the competitive landscape in the market. The study encompasses market attractiveness analysis, wherein applications are benchmarked based on their market size, growth rate, and general attractiveness.

The study provides a decisive view of the global boron trifluoride market by segmenting it in terms of grade, application, end-use industry, and region. These segments have been analyzed based on present and future trends. Regional segmentation includes current and forecast demand for boron trifluoride in North America, Europe, Asia Pacific, Latin America, and Middle East & Africa. The report also encompasses demand for individual application segments in all the regions.

The boron trifluoride market is primarily driven by the increase in demand for boron trifluoride (BF3) as a catalyst in end-use industries and expansion in the chemical industry. Chemical is one of the major industries driving the global boron trifluoride market. Apart from its use as a catalyst, BF3 is employed as a reagent for desulfurizing solvents, intermediates, and cracked petroleum distillates. It is also largely employed as a p-type dopant in the manufacture of several semiconductor products. BF3 gas is employed in several end-use industries including polymers & plastics, chemicals & petrochemicals, semiconductors & electronics, and pharmaceuticals. Chemicals & petrochemicals is a leading consumer of BF3. End-user industries such as chemicals, semiconductors, and pharmaceuticals are anticipated to expand at a steady pace in the near future. This is likely to drive the boron trifluoride market during the forecast period. However, due to the toxicity of BF3 gas, several restrictions have been imposed on its use, handling, and transport. People handling the gas are required to wear protective gear where the gas emission is beyond permissible limit. Currently, end-users of BF3 gas are substituting it with BF3 complexes, which are good catalysts in different chemical reactions. They can substitute BF3 gas in almost all applications. Moreover, due to the availability of BF3 complexes in liquid or solid form, it is easy to handle and transport.

The global boron trifluoride market has been segmented as follows: