The colossal rise in terrorist attacks, in the wake of growing socio-political vulnerabilities, has surfaced towering concerns regarding the safety of defense personnel. Developing countries such as China and India are persistently using their best endeavors on modernizing their legacy military equipment by heavily expending in their defense sectors. As the demand exceeds supply, defense agencies are seen establishing contractual partnerships with military equipment manufacturers to accommodate their specific safety needs.

In a landscape, where safety is exceeding its status as a sheer need, the body armor market remains under the shield of lucrativeness, given the influences of technological reforms such as non-Newtonian fluid used for liquid body armors. The development of covert body armors, with their bullet- and stab-resistant characteristics, have managed to infiltrate into the end-user space, wherein, anonymity remains a priority. Sensing the evolutionary nature of the body armor market, Transparency Market Research, in its latest study, unfolds the qualitative and quantitative dynamics, in the form of actionable intelligence, to assist stakeholders in forming long-term growth strategies. 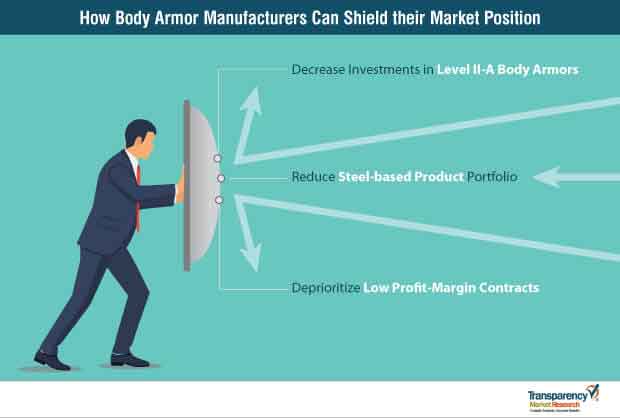 Estimating the Evolution of the Body Armor Market

Body armors have come a long way from being developed using animal hides and coconut palm fibers, to steel, and now composite ceramics. In 2018, 3,500 thousand body armors were sold across the globe, which corresponded to a value of nearly US$ 2,300 Mn, thereby keeping the interest of market players intact towards product innovation.

Manufacturers are safeguarding their position by embracing trends involving the development of new materials, such as aramid and ultra-high molecular weight polyethylene (UHMWPE), to achieve high strength-to-weight ratios. However, their abilities are put to test, as the weight of the armor restricts the swift movement of soldiers.

With innovation being the only solution to reduce weight without degrading the quality of the armor, market frontrunners leverage R&D activities to develop soft variants with high flexibility and durability. Moving forward, the potential application of nanotechnology in the development of robust, durable, shock-resistant, and lightweight body armors will safeguard futuristic sales opportunities. Gauging the favorable market scenario, TMR estimates that, the body armor market will register a CAGR of around 4% during the forecast period of 2019-2027.

Composite Ceramic - The Material of Choice

Persistent innovations in materials and manufacturing technologies have spawned improvements in the strength-to-weight ratios of body armors. Though thicker in nature, steel-based body armors prevent the free movement of soldiers, which has hard pressed manufacturers to move past the heavy variants and capitalize on lightweight materials.

Composite ceramic remains the material of choice for the development of soft body armors, with a competency to withstand even high-caliber ammunition. Nearly half of the body armors around the world that are sold in the defense, law enforcement protection, and civilians segments are developed using composite ceramic, and this percentage is anticipated to persist through to 2027.

Around 80% of body armor demand is generated from the defense sector, as concerns regarding the survivability of soldiers are driving investments. Furthermore, a surge in crime rates and incidences of mass shooting have been triggering the demand for body armors in law enforcement protection activities, which accounts for around 16% of the total sales.

As the governments of developed countries, in general, and developing countries, in particular, are investing towards acquiring competitive military protection equipment, promising opportunities surface for the body armor market. However, a low supply-to-demand ratio has been preventing manufacturers from acquiring the desired bottom line. 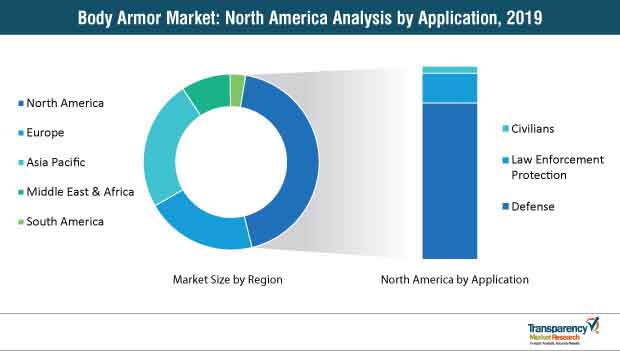 How Body Armor Manufacturers Can Safeguard their Market Position

Level II-A body armors generate low demand as compared to others in the batch, as they only possess resistance against bullets with nominal masses. The target end users for this segment are extremely niche, and significant gains are less likely to occur. In contrast, manufacturers can focus on the development of Level IV body armors, which offer the highest level of protection against 0.30 mm caliber bullets, and are highly preferred for defense activities.

A significant number of manufacturers continues to add value to their steel-based product portfolios, while end users are already resonating with the soft variants, which necessitates the shift towards developing lightweight body armors. Manufacturers can expand their portfolios by leveraging composite ceramic material for the development of high-quality body armors. Further, manufacturers can capitalize on R&D activities to introduce new materials such as carbon nanotubes and non-Newtonian fluids for the development of advanced products.

Manufacturers can lay emphasis on getting business from lucrative end users such as defense and law enforcement bodies, while deprioritizing contracts with low ROI potential. Establishing contractual partnerships with defense agencies can help manufacturers maintain a channelized revenue stream.

The body armor market witnesses competition at various levels, with established and local companies at play. Established players possess a strong footprint in overseas territories, which implies their acquisition of a robust end-user base. Collectively, they account for a sizeable share of around 65-70% of the market.

Global players strive towards acquiring a major share of the market by pushing the physical boundaries of sales and targeting a wider set of audience. For example, Honeywell International Inc., follows the 'expansion through acquisition' strategy, and partners with numerous companies present in developing countries. The adoption of new technologies to advance their product portfolios has also been observed as a crucial strategy in the body armor market.

In the landscape where ideology regarding 'quality of material' over 'cost' prevails, local players constantly push the bars of their research and development activities to develop uniform designs and material technology. For instance, in January 2019, Point Blank Enterprises announced the launch of self-suspending ballistic system shoulder straps to offer lightweight and high-performance crew protection. 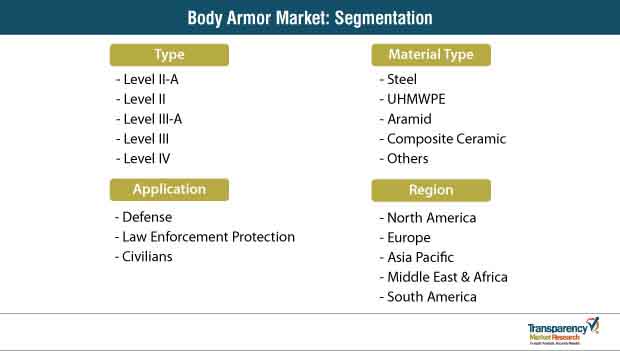 Analysts’ Take on the Future of the Body Armor Market

Authors of the report maintain a propitious perspective on the future of the body armor market. Major boost to revenue is likely to be incited by the demand for modernized protection equipment ascending from the military sector. Previously, the end users of the industry were confined to soldiers, which has now expanded to security guards, police officers, and even civilians.

Targeting countries such as the U.S., U.K., France, and China can turn out to be lucrative, as the high demand for advanced body armors prevails in these regions. Since material becomes the eligibility criteria when it comes to the sales of body armors, manufacturers can expend efforts in R&D activities to develop technologically-advanced materials, with lightweight being the priority. Investments made in the development of Level IV body armors will have better chances at sales closures among the others in the category. Manufacturers can alleviate their production capabilities to level the supply with the demand, and increase their bottom lines.

The global body armor market has been segmented based on type, material, application, and region.

Product innovation and development is a key strategy being adopted by several leading players operating in the global body armor market. Companies are involved in R&D activities in order to develop innovative products, which helps them gain a higher market share than their competitors. Most companies are emphasizing the development of lightweight and hi-tech bodysuits for offering enhanced comfort, flexibility, and performance.

Companies operating in the global body armor market are also focusing on expanding their businesses through strategic acquisitions and partnerships.

This comprehensive report by Transparency Market Research analyzes and forecasts the body armor market at the global and regional levels. The report provides analysis of the market for the period from 2017 to 2027, wherein 2019–2027 is the forecast period and 2018 is the base year. An in-depth and unbiased market assessment has been made to provide readers with comprehensive and accurate analysis. The report emphasizes all major trends anticipated to be witnessed in the global body armor market from 2019 to 2027. It also focuses on drivers, restraining factors, and opportunities for the global body armor market. The study provides a complete perspective about growth of the body armor market, in terms of value (in US$ Mn), across various regions including North America, Europe, Asia Pacific, Middle East & Africa (MEA), and South America.

The report includes detailed value chain analysis, which provides an extensive view of the global body armor market. Porter’s five forces analysis provided in the report helps understand the competition scenario of the market. The study incorporates market attractiveness analysis, wherein type, material, and application segments have been benchmarked based on their market size, growth rate, and attractiveness. In order to offer complete analysis of the competition scenario of the body armor market, attractiveness analysis of the market in every region has been provided in the report.

The report further highlights competition scenario in the global body armor market, thereby ranking all major players according to their geographical presence and key recent developments. Insights into the market is a result of extensive primary interviews, secondary research, and in-house expert panel reviews. Market estimates have been analyzed by considering the impact of different economic, political, social, legal, and technological factors.

The research study includes profiles of leading companies operating in the global body armor market. Market players have been profiled in terms of attributes such as company overview, financial overview, business strategies, and recent developments.

Key players profiled in the report are

Companies are focusing on expanding their business through strategic acquisitions and partnerships.

The global body armor market has been segmented as follows: