Over the past few decades, the automotive sector has evolved at a rapid pace due to advancements in technology, innovations, and evolving industry requirements and standards. Internal combustion engines have experienced waves of modifications and innovations over a span of several decades. The camshaft is one of the integral components of an engine and is primarily deployed in engines to open or close the valve, which allows the entry of fuel and also releases gases efficiently. The shape of the camshaft largely controls the action of the valve. The camshaft plays an important role in enhancing the fundamental functioning of an engine. Camshafts are extensively used in both modern-day overhead-cam (OCH) engines as well as older engines.

Technologies revolving around internal combustion engines have consistently evolved over the past few years and are largely inclined toward improving performance and efficiency. As the automotive sector continues to emphasize on launching lightweight vehicles, improve fuel efficiency, and reduce carbon emission, camshaft manufacturers are increasingly developing new products in tune with these requirements. The significant rise in the number of commercial vehicles particularly in the Asia Pacific region is expected to augment the demand for automotive camshafts during the forecast period. Moreover, government bodies across the world are imposing regulations to curb environmental degradation. At the back of these factors, the global automotive camshaft market is expected to attain a market value of ~US$ 27 Bn by the end of 2027. 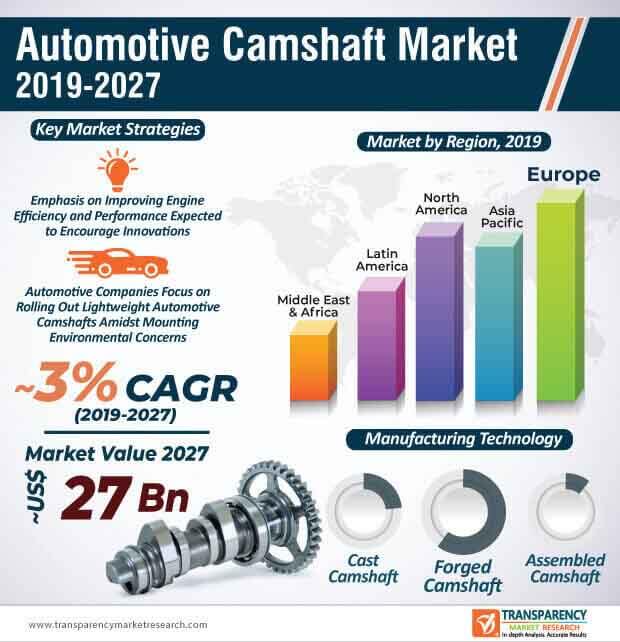 Full-electric and hybrid vehicles have gained considerable popularity in the past 10 years. Automotive manufacturers, researchers, and consumers have expressed noteworthy interest in electric and hybrid vehicles, particularly in the past few years as a measure to curb pollution and save fuel. In hybrid cars, the main source of energy supply is the heat engine due to which combustion is streamlined and fuel-efficient. However, in their efforts to further improve the overall efficiency of heat engine, companies operating in the current automotive camshaft market landscape are increasingly focused on the design aspects of the automotive camshaft.

Within an internal combustion engine, the camshaft plays a key role in the cleaning and refilling of the engine. The valve timing of the engine determines the level of fuel consumed and thus, to manufacture an accurate automotive camshaft, the design aspect of it is highly critical. At present, due to advancements in technology, software tools are increasingly being used to design automotive camshafts. Within the automotive camshaft market, inline engines are set to remain the most popular engine type that will make use of camshafts followed by V-engines. As inline engines are relatively easier to manufacture, cost-effective, and adopted by a large amount of established automakers, the inline engine segment is expected to assert its dominance during the forecast period. However, in recent times, the soaring sales of premium vehicles, growing consumer demand for high performance and comfort are some of the major factors due to which the uptake of automotive camshaft in V-engine is on the rise.

Within the automotive sector, companies are expected to put their best foot forward and launch energy-efficient, sustainable, and technologically sound vehicles. Investments in new technologies, component design techniques, innovations, and other facets of the automotive sector are likely to present lucrative opportunities for participants involved in the current automotive camshaft market. Automotive companies are increasingly focusing on valve-timing technologies to gain an edge in the current market landscape. For instance, in July 2019, Hyundai revealed that the company has developed a continuous variable valve duration (CVVD) engine technology. The company further stated that the new technology is expected to enhance engine performance by 4% and efficiency by 5%. Innovations and development of similar technologies are expected to fuel the growth of the automotive camshaft market during the assessment period. Based on the manufacturing technology, the forged automotive camshaft is expected to have the highest market share followed by cast camshaft and assembled camshaft. 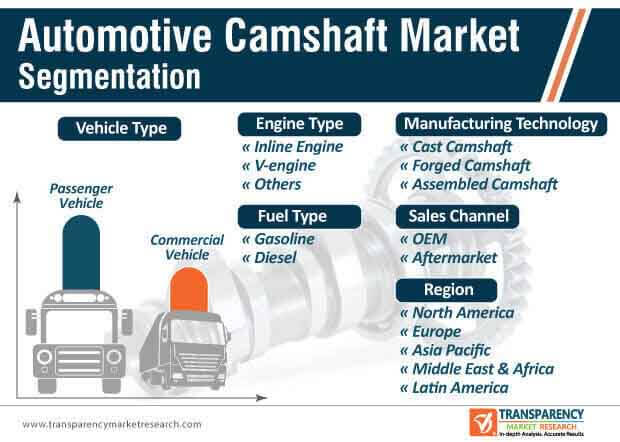 Stuck in a neck-to-neck competition with other brands? Request a custom report on Automotive Camshaft Market

Transparency Market Research’s recent report on the automotive camshaft market, with the help of a comprehensive outlook, provides readers with an assessment of the global market landscape. This study on the automotive camshaft market analyzes the scenario for the period of 2019 to 2027, wherein 2018 is the base year and 2017 and before is historical data. This report enables readers to make important decisions with regard to their business, with the help of a wealth of information enclosed in the study.

This TMR study on the automotive camshaft market also provides data on the developments made by important players and stakeholders in the market, along with a competitive analysis. The report also provides an understanding of the strengths, weaknesses, threats, and opportunities, along with trends and restraints in the landscape. Presented in a clear sanctioned manner, this report on the automotive camshaft market gives readers an individual understanding of the market.

This study also discusses the underlying trends and impact of various factors that are driving the automotive camshaft market, along with their influence on the evolution of the market.

This study also offers Porter’s Five Point Analysis, value chain analysis, regulatory scenario, and a SWOT analysis of the automotive camshaft market, in order to elaborate the crucial growth tactics and opportunities for market players contributing to the market.

Key Questions Answered in This Report on Automotive Camshaft Market

This report answers these questions and more about the automotive camshaft market, aiding major stakeholders and key players in making the right decisions and strategizing for the advancement of their business.

This report uses an analytical triangulation method to estimate the numbers and figures of the automotive camshaft market, with both a bottom-up and top-down approach.