On the flip side, lack of well-equipped healthcare facilities and lack of well-trained interventional cardiologists in emerging economies are challenging the market’s growth.

A report by Transparency Market Research (TMR), projects the global arterial stents market to expand at a healthy 9.5% CAGR during the forecast period between 2017 and 2025. Progressing at this rate, the market which stood at US$8.0 bn in 2016 will become worth US$17.8 bn by the end of 2025. 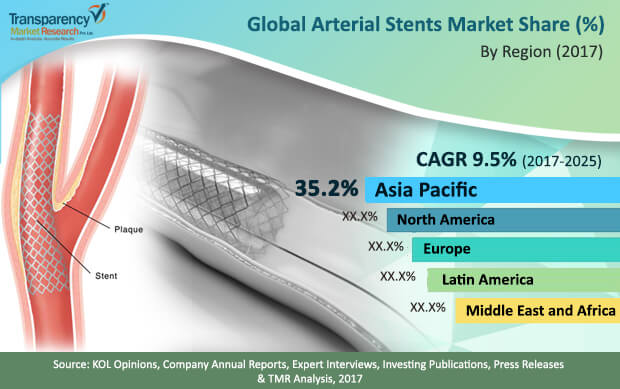 Of them, coronary stents held the leading market share vis-à-vis revenue in 2016, the growth of this segment is attributed to the rising adoption of novel coronary stents such as bioresorbable stents by interventional cardiologists. Drug-eluting stents within coronary stents accounted for the leading revenue generation in 2016, and is likely to hold on to its dominant position over the forecast period. The growth of drug-eluting segment is due to development and incorporation of anti-restenotic agents to prevent the incidence of re-stenosis.

However, peripheral stents is likely to surpass coronary stents in terms of growth rate over the forecast period. This is mainly because of rising awareness of peripheral artery diseases and introduction of innovative stents by key players that are designed for femoral and popliteal arteries.

Driven by Modernization of Healthcare Sector in China and India, Asia Pacific to Emerge as Key Market

Geographically, the global arterial stents market is segmented into North America, Asia Pacific, Europe, Latin America, and the Middle East and Africa. Amongst all, in 2016, Europe held the leading market share in terms of revenue; this is mainly due to the strategic presence of key arterial stents manufacturers in Germany and the U.K. The rising preference for minimally invasive surgeries also account for the growth of Europe arterial stents market.

North America ranks as the second-leading market for arterial stents globally, and is likely to expand at a significant CAGR over the 2017-2025 forecast period. However, Asia Pacific is anticipated to display the leading CAGR over the forecast period as large business groups are investing substantially for the modernization of the healthcare sector in China and India.

Choc-o-bloc with small regional as well as large global players, the global market for arterial stents is highly fragmented. In order to thrive in such a fragmented competitive landscape, big ticket players are seen banking upon effective clinical trials to come up with better products. Despite, involved regulatory approvals, they are charging ahead. A noticeable trend in the market is the usage of nickel titanium alloys and other alloys to build new and better products. Savvy players are also seen collaborating with regulatory agencies in order to further gain a foothold in the market.

Acting as tailwinds to the global market for arterial stents is the rising occurrence of arterial issues, including atherosclerosis. Arterial stents are seeing their popularity grow by the day because of their efficiency in tackling coronary and peripheral artery diseases and also because of the rising knowledge about such minimally invasive methods to open up arteries that carry blood in the human body. Launch of more cutting-edge arterial stents every now and then is proving beneficial for the market too. However, despite so many drivers, the market is being prevented from achieving its full potential because of the dearth of advanced healthcare institutions and highly-skilled interventional cardiologists in developing nations.

Application-wise, the key segments of the global market for arterial stents market are iliac artery, coronary artery, femoral and popliteal artery, and carotid artery, among others such as renal and biliary artery, below-the knee artery, etc.

From a geographical standpoint, Europe accounts for a dominant share in the market for arterial stents mainly because of many prominent manufacturers being domiciled in the nations of the U.K. and Germany. Strong uptake of minimally invasive surgeries in the region has also helped its market. While Europe region takes the lead when it comes to market share, Asia Pacific surpasses others vis-à-vis growth rate. Highly populous, fast expanding economies of China and India, seeing large scale upgrading of their healthcare sector, are mainly said to be powering the growth in Asia Pacific.

The report segments the Global Arterial Stents Market into the following: