The strong prevalence of cardiovascular diseases, which the WHO has identified as the number one cause of death across the World, has been luring numerous research and development activities for several decades. And now, angiography devices have been invented as a mode of medical imaging to visualize blood vessels and body organs, especially the arteries, veins, and heart. As the technology is harnessed further to make it more affordable for a larger pool of patients, and healthcare infrastructure improves in some of the most promising emerging economies, such as the BRICS nations, the market for angiography devices is primed for a prosperous future. According to this business intelligence study, the demand in the global angiography devices market will multiply at a notable CAGR of 4.3% during the forecast period of 2017 to 2025. The analysts of this study has estimated that the vendors operating in the global angiography devices market will have a revenue of US$33,370.3 mn to share from, by the end of 2025.

Apart from the prevalence of coronary artery disease, increasing cases of blockages in blood vessels in non-coronary diseases, particularly among the geriatrics, is expected to drive the demand in the angiography devices market. In addition to that, growing percentage of people with obesity across the world, resilient R&D and consequent product launches by various leading players, and government subsidies to increase the ubiquity of essential medical equipment are some of the other key factors augmenting the demand in the global angiography devices market. 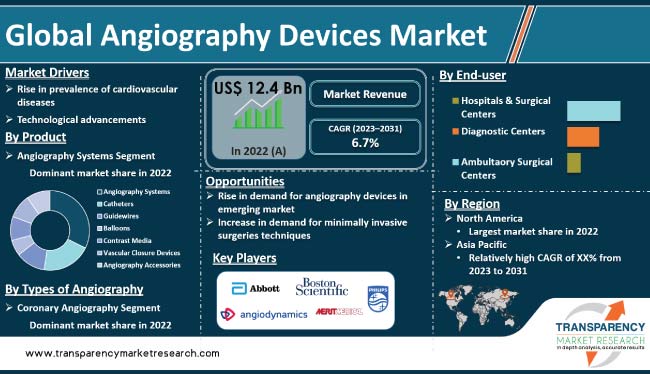 On the basis of product, the angiography devices market has been segmented into angiographic systems and consumables. The consumables segment is further sub-segmented into catheters, guidewires, balloons, contrast media, incision closure devices, and accessories. The consumables segment dominated the market in 2016 and is anticipated to maintain a strong demand throughout the forecast period. The growth of the segment can be attributed to the rising repeat orders for consumables. The angiographic systems segment is anticipated to witness a sluggish growth in the forecast period owing to the obsolescence of the existing devices and the lack of funds for the replacement of the devices.

Technology-wise, the market for angiography devices has been bifurcated into MRI, CT, X-ray and others. The X-ray segment, which currently provides for the maximum demand, is further segmented into image intensifiers and flat-panel digital detectors. The profitability of this segment can ba ascribed to the increasing demand for flat-panel digital detectors. However, CT and MRI are anticipated to lead the future market growth owing to their non-invasive nature of performing the angiography. Application-wise, the angiography devices market has been segmented into renal, cerebral, carotid, peripheral, aortic, and coronary. The coronary angiography segment dominated the demand in 2016 and is foreseen to remain in high demand throughout the forecast period. The growth of the segment can be attributed to the rising burden of coronary artery diseases among the population in the aging and young population. According to the U.S. Census, the number of people aging above 65 years of age is anticipated to increase from 40 Mn in 2010 to 81 Mn in 2040, which is considered to one of the major factors leading to the rising burden of the disease.

The analysts of the report have evaluated that North America provided for a demand worth of US$8,543.6 mn in 2016, and estimated the opportunities from this region to aggregate up to US$12,026.6 mn by the end of 2025. However, the Asia Pacific angiography devices market is projected for a CAGR of 5.2% during the forecast period of 2017 to 2025, with the opportunities expected to translate into a revenue of US$8,225.8 mn by 2025.

Angiography can be defined as the medical imaging procedure used for visualization of the blood vessels and body organs, primarily the arteries, veins and heart. This procedure employs a contrast media that absorbs the radiations and shows as images enabling the identification of coronary artery disease, and other coronary diseases. It is also employed for the detection of blockages of blood vessels in non-coronary diseases.

The research is a combination of primary and secondary research, conducted for understanding and arriving at trends, used to forecast the expected revenue of angiography devices employed in the near future. Primary research formed the bulk of our research efforts with information collected from in-depth interviews and discussions with a number of key industry experts and opinion leaders. Secondary research involved study of company websites, annual reports, press releases, investor presentations, analyst presentation and various international and national databases. The report provides estimated market size in terms of US$ Mn for product, technology, application, end-user, and geography for the period 2015 to 2025, considering the macro and micro environmental factors. The revenue generated from each product, technology, application, and end-user was calculated by considering the number of angiography procedures performed globally. In addition, the regional trends of these devices, the geriatric population, increasing obesity, and the rise in the number of angiography procedures were considered.

The market report comprises an elaborated executive summary, which includes market snapshot that provides information about various segments of the market. It also provides information and data analysis of the market with respect to market segments based on product, technology, application, end-user, and geography. The market overview section of the report analyzes market dynamics such as drivers, restraints and opportunities that influences the angiography devices market in the current and future scenario. The report also provides the pipeline products, the CPT codes of reimbursement for the angiography procedures, the regulatory approval process, porter’s five force analysis, and the key industry developments.

Market share analysis among the market players is analyzed to signify the contribution of these players in the market in terms of percentage share. All these factors will help the market players to decide about the business strategies and plans to strengthen their positions in the global market. Based on geography, the market has been analyzed for major regions: North America, Europe, Asia Pacific, Latin America, and Middle East & Africa. The study also covers detailed country analysis contributing majorly in the angiography devices market.

The Angiography Devices Market has been segmented as follows: