Manufacturers of alcoholic drinks that are continuously launching new products with added flavors. Curiosity among consumers especially among millennials is attracting them to try these products, which is having a positive bearing on the alcoholic beverages market. 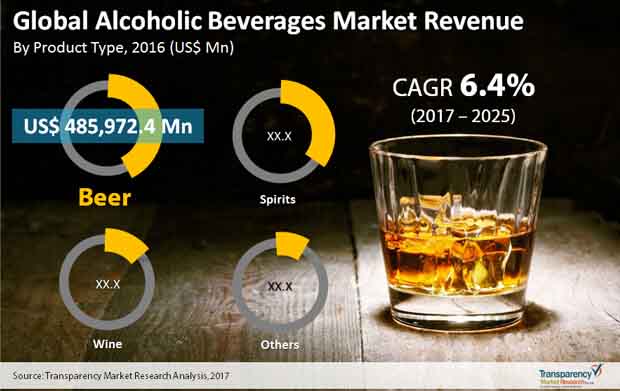 Based on packaging type, the global alcoholic beverages market is segmented into glass bottles, plastic bottles, tins, and others. The key segments of the market depending upon sales channel are modern trade, specialty stores, convenience stores, commercial, hotels/restaurants/bars, online retailers, and other retailing formats. Of them, specialty stores segment is estimated to hold 27.4% of the market by the end of 2017.

In this report, North America, Latin America, Europe, Asia Pacific, and the Middle East and Africa are the segments that divide the alcoholic beverages market based on geography. Of them, Asia Pacific is the prominent region accounting for the leading share in the overall market. This is mainly due to increasing urbanization and a growing middle-class population with disposable incomes.

However, amongst all, Latin America is expected to display the leading 5.4% CAGR between 2017 and 2025. This is mainly because of rising urbanization and increasing per capita income in this region. Furthermore, changing lifestyles, influence of social media, and increasing trend of entertainment at clubs, lounges is driving sales of alcoholic beverages.

This report provides forecast and analysis of the global alcoholic beverages market. It provides historical data of 2015 along with estimated data of 2017, and forecast data up to 2025 in terms of revenue (US$ Mn). The report also includes macroeconomic indicators along with an outlook on alcoholic beverages for global market. It includes drivers and restraints of the global alcoholic beverages market and their impact on each region during the forecast period. The report also comprises the study of current issues with consumers and opportunities for alcoholic beverages products. It also includes value chain analysis. In order to provide users of this report with comprehensive view of the market, we have included detailed competitiveness analysis and market key players and strategy overview. The dashboard provides detailed comparison of alcoholic beverages manufacturers on parameters such as total revenue, product offerings, and key strategy. The study encompasses market attractiveness analysis by diaper type and region.

A number of primary and secondary sources were consulted during the course of the study. Secondary sources include Factiva, and Hoover’s, and company annual reports and publications.

The global alcoholic beverage market is segmented as follows: