The global aircraft market has witnessed increased demand for fuel-efficient planes that are lighter and offer greater operational efficiency. This, coupled with environmental awareness and the global push to reduce wastage in manufacturing processes, has led to the integration of several technological advancements, dramatically changing the aerospace industry as a whole. The impact of this has also trickled into the aerospace valves market, with players using additive manufacturing technology, and the like, to cater to varied demands from both, commercial and military end users.

According the this report on the global aerospace valves market by Transparency Market Research, based on an analysis of trends impacting the market, it is expected to near or cross the US$ ~4 Bn mark by the end of the forecast period in 2027. 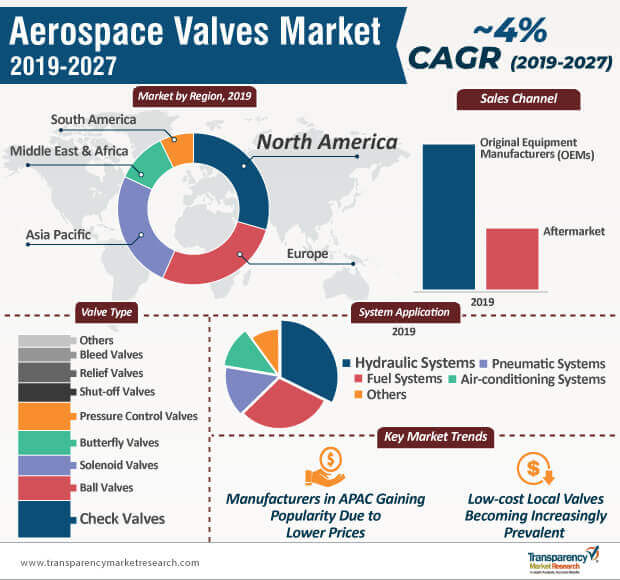 The commercial aircraft sector, in general, has witnessed growth in recent years, as airlines add to their fleet and the demand for advanced planes increases, which, in turn, has been influenced by the global push for economical and energy-efficient aircraft. This, coupled with an increase in passenger travel, has led to the production of newer aircraft with better equipment.

With the manufacturing of aircraft on the rise, there is high demand for efficient valves for a myriad of purposes, including hydraulics, fuel, pneumatics, and air-conditioning systems, which is expected to have a direct and positive impact on the aerospace valves market.

The pervasive influence of technology has influenced the aerospace industry, where newer and better prototyping & manufacturing techniques are set to change the way production is carried out. One of these is additive manufacturing, or 3D printing, which has gradually become popular for the manufacturing of components, including valves, in the aerospace industry. Players are increasingly leveraging this process to reduce development time and part weight, and increasing the operational efficiency of the product. The 3D printing process is being seen as a crucial technology, the adoption and use of which is likely to shape the evolution of the industry itself. For instance, in June 2019, Eaton, a leading player in the global aerospace landscape, announced the use of additive printing for the manufacturing of aluminium housing and valves for the ram air valve assembly.

According to this study on the global aerospace valves market, the fluctuating costs of raw materials required for the production of valves, along with the high costs of research & development, are having a significant impact on the landscape. This has resulted in manufacturers in the aerospace valves market being unable to meet the increasing demand from end users, which is expected to have a negative impact on the growth of the market. The dearth of raw materials has also led to a slowdown in the innovation of aerospace valves, which is also expected to negatively impact the expansion of the landscape. 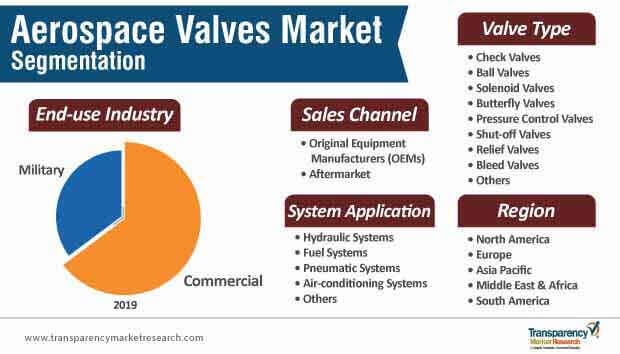 Stuck in a neck-to-neck competition with other brands? Request a custom report on Aerospace Valves Market

Analysts opine that, the global aerospace valves market will register a steady, moderate growth in the foreseeable future. Manufacturers in the market who are set on research & development to boost design and efficiency are likely to strengthen their presence in the global scenario. Stakeholders in the market are also increasingly looking at collaborations and acquisitions to encourage and push for better product innovation to sustain themselves in the aerospace valves market. Analysts at TMR believe that, technology-based competition will shape the evolution of the aerospace market landscape, along with customer loyalty and brand image.

Of the regional markets in the aerospace valves landscape, the fastest growing is Asia Pacific, due to increasing air traffic as well as investments in the aerospace & defence sector. This is a trend players should capitalize on by focusing on making inroads into the region.

Key providers of aerospace valves, such as Honeywell International Inc., Parker-Hannifin Corporation, Safran, and Meggitt PLC, are focusing on acquisitions, product innovations, and new product development, to offer a diversified range of products and win more number of customers. Some other key developments in the global aerospace valves market are: