The number of people suffering from dementia, as found by the World Health Organization (WHO), is estimated to reach 70 million by 2030, and exceed 105 million by 2050. The prevalence of mental health disorders and their progression at a staggering rate is being well-analyzed by government authorities and discerning investors across the world, which is leading to huge investments in the acute agitation and aggression treatment landscape.

With acute agitation and aggression being a common symptom among patients suffering from various types of mental illnesses, the healthcare industry is expending efforts towards developing effective panaceas. In 2018, the acute agitation and aggression treatment market registered a value of ~US$ 2.9 billion, and is projected to represent a compound annual growth rate of ~5 percent during 2019-2027 - finds a recently published Transparency Market Research (TMR) report.

Modern-day individuals give equal attention to mental health and physical health, given the easy access to healthcare information through online and offline channels. Intense research & development activities undertaken for the introduction of novel drugs with high efficiency and potency, coupled with numerous pipeline drugs, are projected to add new growth tangents to the acute agitation and aggression treatment market. 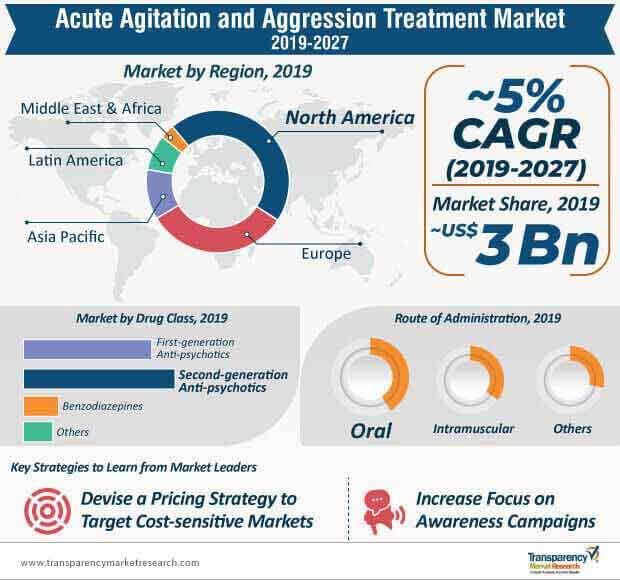 The strong social stigma attached to mental illness leads to the exclusion of affected individuals from mainstream society, and they fall victim to inequality in availing professional opportunities, which prevents them from seeking screening and treatment. In addition, social stereotypes and judgments associated with the dangerous and violent nature of individuals suffering from acute agitation and aggression, pressurize them to pose normal, which further worsens their condition. For the industry, this acts as a deterrent and reduces the chances of market players in up-taking their market share.

Marketing campaigns, as initiated by private companies, and increase in general awareness, as undertaken by central health authorities, regarding acute agitation and aggression treatment, are likely to surge the number of end users in the industry. Currently, hospitals, ambulatory surgical centers, and psychiatric care facilities, among others, account for the massive adoption of drugs and treatment procedures. However, hospital and ambulatory surgical centers show a striking RoI potential with their high concentration in developed countries and even in remote areas of developing countries. Since patients with acute agitation and aggression disorder require immediate attention and care, to further avoid the condition from worsening, intensive care units and emergency departments of hospitals are gaining high traction.

In 2018, hospitals and ambulatory surgical centers collectively accounted for ~45% of the market share, with the growth in the number of individuals seeking screening and treatment for acute agitation and aggression disorder. However, once held back on account of the dearth of skilled psychiatrists, psychiatric care facilities are witnessing exponential improvement in the number of skilled medical personnel as well as patients demanding consultations for acute agitation and aggression treatment. This is likely to stimulate the popularity of psychiatric care facilities, which are projected to record a CAGR of ~5% during the forecast period. 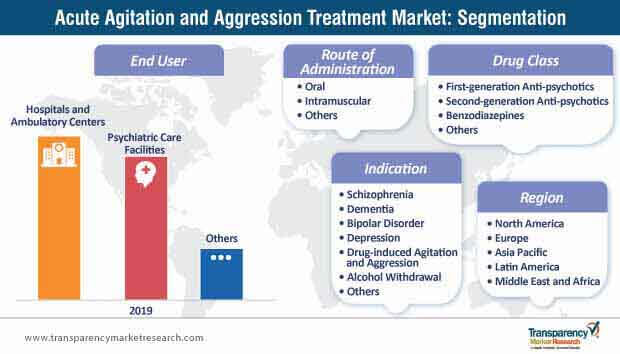 To get a bird’s eye view of Acute Agitation and Aggression Treatment Market ’s forecasts, ask for a Custom Report

Acute Agitation and Aggression to Remain a Crucial Indicator for Schizophrenia

TMR’s study finds that, the number of individuals seeking medical help for schizophrenia is relatively higher than other disorders, including dementia, bipolar disorder, and depression. According to the report data, the sales of drugs for the treatment of schizophrenia will rise from ~US$ 600 million in 2019 to ~US$ 910 million in 2027, representing a CAGR of ~5 percent during the forecast period.

Delusions, hallucinations, and disorganized speech are some of the symptoms that schizophrenic individuals suffer from, which leads to lack of clarity and indecisiveness, and makes treatment unavoidable. However, an alarming rise in the number of patients suffering from dementia is also likely to strengthen the demand for effective treatment. In 2019, global spending on the treatment of dementia will account ~US$ 530 million, and is likely to proliferate at a CAGR of ~5% during the forecast period.

As awareness about the condition and its long-term effect increases, there has been an exponential growth in the number of patients receiving medical help for acute agitation and aggression, which has intensified the competitiveness of the landscape. In order to stay ahead of the curve, market players make heavy investments in research & development activities to increase the exclusiveness of their product portfolios, and Ono Pharmaceuticals Co., Ltd has implemented the same strategy. The company inaugurated a new research center for strengthening its development and manufacturing capabilities of novel drugs for the treatment of mental illnesses.

Additionally, in order to introduce novel treatments, research activities on lithium, cannabinoids, analgesics, narcotics, and non-steroidal anti-inflammatory drugs, as well as newer antiepileptic drugs are ongoing at a significant pace. For instance, BXCL501, developed by BioXel Technologies, for the treatment of acute agitation and aggression condition, indicating schizophrenia, bipolar disorder, and geriatric dementia, is a pipeline drug. Another player, H. Lundbeck A/S, accounts for the development of Rexulti, a pipeline drug for the treatment of agitation, indicating dementia.

The report provides profiles of the leading players operating in the global acute agitation and aggression treatment market. These include -

Acute Agitation and Aggression Treatment Market - Scope of the Study

[245 Pages Report] Transparency Market Research (TMR) conducted a comprehensive assessment regarding the growth potential of the acute agitation and aggression treatment market, in its latest research report, for the forecast period of 2019-2027. The research report consists of some distinguished insights for stakeholders for them to sustain their position and move to a higher market share. This exclusive research report is intended at providing rare and distinguished insights pertaining to the growth of the acute agitation and aggression treatment market, and offers information regarding the growth opportunities for market players. With the help of the insights mentioned in the research report, stakeholders in the acute agitation and aggression treatment market will be able to gain a brief outlook on its growth trajectory, which can help them in making well-informed strategies for their business growth.

The research undertaken by Transparency Market Research (TMR) analysts consists of a robust approach in order to cull key insights regarding the growth of the acute agitation and aggression market for the forecast period of 2019-2027. Interviews as well as discussions with leading opinion leaders, market heads, vendors, distributors, industry experts, and key players were carried out in order to conduct primary research. In addition to this, our analysts also conducted a thorough secondary study of marketing collaterals, industry associations, company websites, and government statistics.