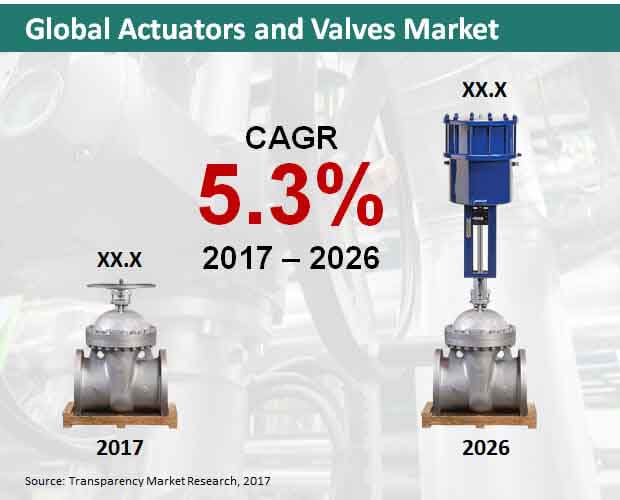 Key Manufacturers of Actuators and Valves

The report has profiled companies namely, Honeywell International Inc., AVK Holdings A/S., Flowserve Corporations, Schlumberger Limited, Emerson Electric Co., Tyco International Ltd., KITZ Corporation, Burkert Fluid Control Systems, Watts Water Technologies, Inc, and Rotork Plc. as the key players in the global actuators and valves market. These companies are expected to instrument the global production of actuators and valves in the foreseeable future. Adopting new designs to extend the application purview of actuators and valves will be a key strategy of these market players. In addition, several actuators and valves manufacturers will be integrating advanced sensors and smart technologies to enhance the functionality of these components and capture new growth opportunities in the future.

Rapid growth of the wastewater and water treatment industry has created enormous demand for actuators and valves over the past few years. The surge in the urban population worldwide has proliferated demand for water that is safe for consumption. Although several developed nations possess well-established water treatment infrastructure, lack of proper distribution facilities has resulted into water contamination at the time of transportation, thereby putting pressure on the water treatment facilities. Governments around the world are therefore concentrating on improvement of their water treatment facilities and distribution channels, which in turn will influence demand for actuators and valves in the near future.

The report provides an exhaustive synopsis of the global actuators and valves market, engulfing an executive summary that elucidates the core trends influencing the market expansion. This chapter also sheds light on impacts that the dynamics are likely to pose on growth of the market in the long run. The report also imparts figures appertaining to CAGRs from a historical and forecast point of view. An overview of the global actuators and valves market follows the executive summary, and issues a clear picture of the market’s scope to the report readers. The overview includes a concise market introduction succeeded by a formal definition of “actuators and valves”. Chapters subsequent to the overview elaborates several dynamics including driving factors, limitations and prospects being observed in the market through the forecast period. Meanwhile these chapter also inundate detailed insights related to the bottom line of enterprises, global economy and fiscal stimulus.

This analytical research report on the global actuators and valves market is a complete package, which includes intelligence on key participants underpinning the market expansion. In the last chapter of the report, which elucidates the competitive scenario of the market, strategies implemented by the market players, along with their product overview, company overview, key financials, key developments and SWOT analysis has been rendered exhaustively. In addition, region-wide spread of these market players, their future expansion plans, market shares, revenues, and mergers & acquisition activities between them have been described in detail in this concluding chapter of the report. An intensity map has been employed in the report to profile the market players situated across geographies.

Credibility of the researched statistics and data is backed by the unique research methodology employed by the analysts at TMR, which ensures higher accuracy. TMR’s research report on the global actuators and valves market can assist its readers in gaining detailed insights on many different aspects governing the market around key regional segments included in the report. The report readers can further slate key strategies for tapping into vital revenue pockets and gaining benefits over the intensifying competition in the market. Information presented in the report has been scrutinized and monitored thoroughly by TMR’s industry experts. Figures and numbers offered in the report have also been validated by the analysts in order to facilitate strategic decision making for the report readers.

A segmentation analysis offered in the report propounds forecasts on global actuators and valves market. Categorizing the market in terms of applications, product type, and region. Analysis on Y-o-Y growth comparison, the market share comparison, and the revenue comparison coupled with relevant market numbers is offered in this chapter. Global market for actuators and valves has been regionally divided into Japan, Middle East & Africa, Europe, Asia-Pacific excluding Japan, North America, and Latin America.