Since it was first produced in the latter half of the 20th century, xanthan gum has been widely used as a food additive around the world. It is generally considered an effective stabilizer, finds use in a variety of processed foods, and is also a preferred method of thickening liquids that are made especially for people who have difficulty swallowing. Xanthan gum has a myriad of applications in commercial kitchens, including suspension of solids, thickening egg substitutes, and as a binder to improve the uniformity of foods, among others. As a substitute and alternative, it is increasingly gaining traction in the F&B space, which is thereby catalyzing the growth of global xanthan gum market.

With gluten-free cooking and baking becoming increasingly popular in recent times, the popularity of xanthan gum is also growing. It is being used to provide elasticity to the foods it is used in, by acting as a binding agent for the flour to hold on to the moisture added to it. Gluten free products rely on substitutes and binding agents to imitate the texture, crumb-feel, and flexibility of conventional foods containing gluten. This widespread popularity of the product has led to the xanthan gum market having witnessed the sales of ~200 thousand tons in 2018, with the market expected to register an increase of ~5% volume CAGR over the forecast period (2019 - 2027). 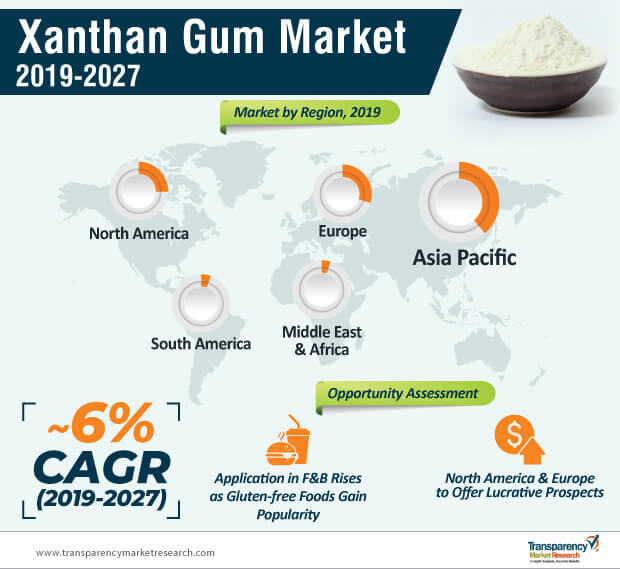 The application of xanthan gum also extends to the oil & gas sector, where it has been becoming progressively popular in recent years. Due to its ability to suspend solid particles, reduce pressure loss during drilling, and reduce damage to the reservoir, xanthan gum is being used extensively as a mud additive in this industry. The benefits of xanthan gum that contribute to its popularity include its high efficiency factor, alongside its resilience to high temperatures, which makes it an ideal drilling fluid. It is also being employed to increase the viscosity of concrete used underwater to prevent washouts.

There has been an increase in the number of oil reserves in recent years, as oil & gas exploration and drilling activities continue to rise around the world. This has led to an increase in the demand for environmentally-friendly oil drilling mud additives, which have a minimal negative impact on the environment. Xanthan gum is gaining popularity, as it not only improves the efficiency of drilling, but is also is an eco-friendly alternative to polyacrylamide, modified starch, etc., which are currently being used in the market. It is also used in other end industries, such as pharmaceuticals, as a thickening agent; in personal care products, such as toothpaste, lotions, etc.; and in agrochemicals, paints, and printing inks; which is also contributing to the growth of the global xanthan gum market.

The increased demand for xanthan gum from countries in APAC has driven the growth of the market in the region. In 2018, APAC accounted for over one-third of the global market share by revenue. This trend is set to remain the same in the coming years, with the xanthan gum market in APAC anticipated to increase at a volume CAGR of ~6% over the forecast period, making it a lucrative regional market. This can be attributed to the changing lifestyle habits of people, along with the growth of the food and beverage industry in the region, which is likely to boost the expansion of the xanthan gum market in APAC. 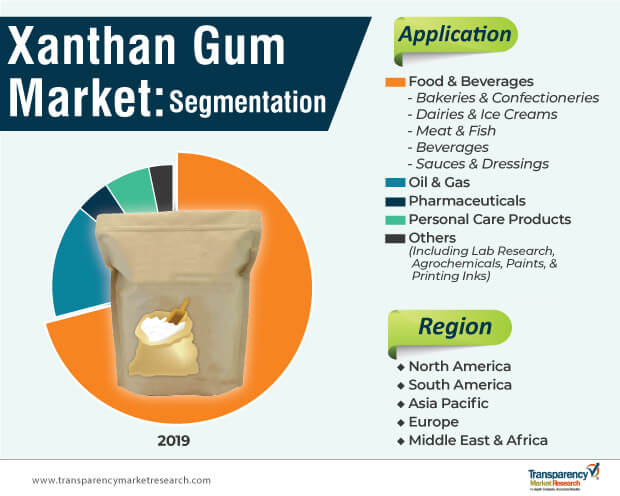 Looking for Regional Analysis or Competitive Landscape in Xanthan Gum Market, ask for a customized report

According to analysts at Transparency Market Research who have complied this report on the xanthan gum market, the market is set to expand at the rate of ~6% during the forecast period. The landscape is considered to be fairly consolidated, with the top five players accounting for over three-fourth of the total market share in 2018.

The global demand for xanthan gum has been consistent from F&B and oil & gas industries in recent years, but is also gradually increasing from other end-use industries such as pharmaceuticals, personal care, and others. Players in the landscape should focus on providing products suited to applications in these industries to gain a competitive edge in the market space.

With the production of xanthan gum centred around APAC and North America, with smaller pockets globally, manufacturers in the market should focus on making inroads into emerging markets in Europe and Latin America, which are likely to offer lucrative geographical expansion prospects.

TMR’s recent publication on the xanthan gum market provides audiences with an overall market outlook, with the help of a comprehensive assessment of the global market scenario. TMR’s study on the xanthan gum market analyzes the industry with respect to the historical and current market scenario, which offers a forecast for the period of 2019 to 2027.

The first section in TMR’s report on the xanthan gum market begins with a premise that includes the report scope, market segmentation, and research highlights. This is followed by an executive summary that emphasizes the xanthan gum market aspects covered in the study. This section provides a brief understanding of the market elements, and enables readers to understand the aspects covered in the study. The report also includes the market dynamics that offer an understanding of the market drivers, restraints, and opportunities.

The next section includes an extensive segmentation analysis of the xanthan gum market. This evaluation includes the division of the xanthan gum market segments based on application and region. Furthermore, an analysis of these key segments, year-on-year growth projections, and basis point share analysis are included in the report. These help readers identify promising market growth areas.

The TMR study on the xanthan gum market offers an assessment of the geographical landscape of the market. The regional study helps market competitors make important decisions pertaining to their business. Individualized, country-wise, and segment-wise analysis pertaining to individual regions helps readers decipher the potential of the market in various geographies. Supported by year-on-year growth projections and global value and volume share, this section is a vital part of the report.