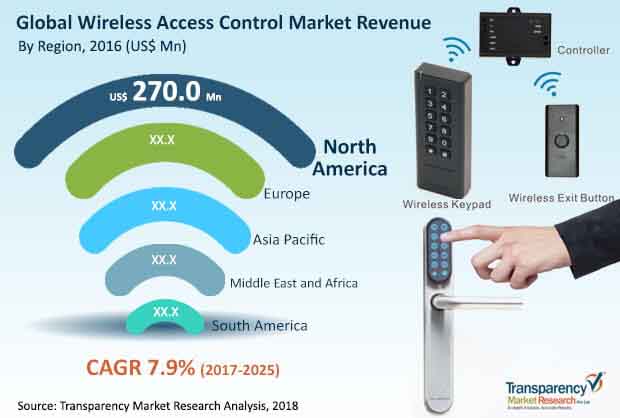 Global wireless access control market is segmented into component, application, end-use industry, and by region. By component, the market is further segmented into hardware, software and services. Hardware segment is further bifurcated into readers, locks, transceivers, batteries and others. Again, the readers sub segment is further divided into biometric, RFID tags and readers, mobile credentials and others. A thorough analysis of the market suggested that the RFID tags and readers is popular amongst enterprises that have a capacity of over 200, whereas biometrics remained integral to smaller setups. However, the overwhelming usage of smartphones is likely to have a positive impact on smartphone access sub-segment.

By end-use industry, the wireless access control market can be segmented into residential, commercial and institutional. Commercial industry enjoys the highest market share among others due to necessity of safeguarding the organization assets and employee’s safety. The commercial segment is expected to the lead the global market as the need to secure workplace premises is an urgent one amongst enterprises of varying capacities. By the end of 2025, the commercial segment is projected to acquire a share of 56.31% in the global wireless access control market in terms of revenue.

Commercial Facilities and Office Spaces to Add Fillip to the Market

Global Wireless Access Control market report provides analysis for the period 2015 – 2025, wherein the period from 2017 to 2025 is the forecast and 2016 is the base year. The data for 2015 has been included as historical information. The wireless access control report covers all the major types and application playing significant role in the global wireless access control market’s growth over the forecast period. The report also include various drivers, restraints, and opportunities expected which affect market’s growth during the above mention period. The study provides an entire perspective on the market’s growth in terms of revenue in US$ Mn and volume in thousand units, across different geographical regions such as Asia Pacific, North America, Middle East & Africa, Europe, and South America.

The market overview section of the report demonstrates the market dynamics such as the drivers, restraints, and opportunities that influence the current nature and future status of this market, key indicators and trends. An attractiveness analysis has also been provided for every segment in the report, in order to provide a detailed understanding of the overall scenario in the wireless access control market. Moreover, the report provides an overview of various marketing strategies adopted by the key players present in the market. Key market indicators also been included in the report provide significance of the factors which are capable of changing the market scenario. These indicators are expected to define the market position during the forecast period.

The report also includes competition landscape which includes competition matrix and market share analysis of major players in the global large format display market based on their 2016 revenues and profiles of major players. Competition matrix benchmarks leading players on the basis of their capabilities and potential to grow. Factors including market position, offerings and R&D focus are attributed to company’s capabilities. Factors including top line growth, market share, segment growth, infrastructure facilities and future outlook are attributed to company’s potential to grow.