In a rapidly growing economy like India, the water crisis is a huge concern for environmental and health commissions. Hence, the Government of India is readily adopting waterless urinal systems, as these systems help save 57,000 to 1,70,000 liters of water, per urinal, per year. Since the Indian government is introducing various health and hygiene schemes, this region has high potential to emerge as a key source for incremental opportunities. 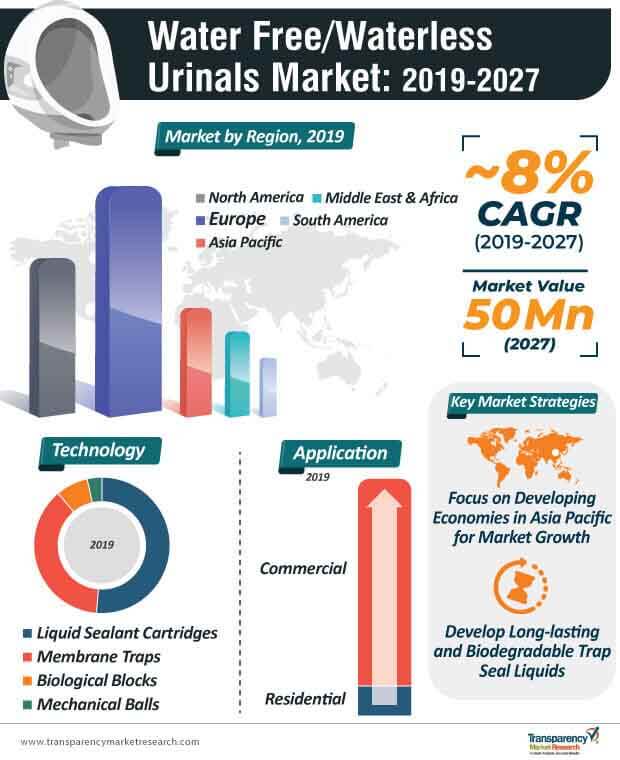 Liquid sealant cartridges are projected to account for the highest revenue in the water free/waterless urinals market, with a value of ~US$ 27 million by 2027. Hence, manufacturers are innovating new sealants that serve the convenience of stakeholders during the installation process. For instance, Waterless Co. Inc. - a manufacturer of water-conserving urinal fixtures, announced the launch of BlueSeal®, a long-lasting and biodegradable trap seal liquid that eliminates odor.

The new variety of trap seal liquids complement commercially available cleaners and are able to withstand harsh temperatures. This helps consumers save on the additional cost of purchasing any specialized cleaners, and eliminates winterization costs in regions that witness extreme cold temperatures.

Although consumers have the resources to adopt waterless urinal systems, certain drawbacks of the framework are likely to slow down market growth. For instance, many individuals show resistance toward the usage of no-water urinals. Also, appointed cleaners find it difficult to adapt to the process of cleaning waterless urinals. Hence, manufacturers in the water free/waterless urinals market are increasing awareness about how no-water urinals help save huge amounts of water, and are developing specially designed tools to make the cleaning process easy and safe. 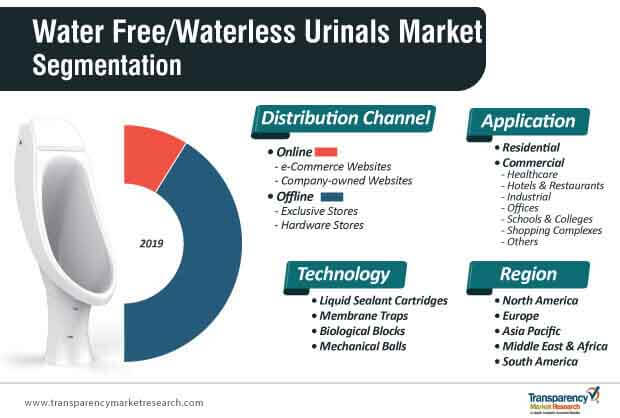 Stuck in a neck-to-neck competition with other brands? Request a custom report on Water Free/Waterless Urinals Market

Manufacturers in the water free/waterless urinals market should increase their production capabilities in Europe, as the region is projected to continue todominate the global market throughout the forecast period, and is estimated to grow from ~39% to ~41% in terms of market share. Apart from extending supply chain tie-ups with offline vendors, manufacturers can market their waterless urinals through digital media channels to increase their sales online.

However, there is still some resistance as far as the adoption of waterless urinal systems is concerned, since, in many cases, the framework of older flush urinals do not complement the new retrofits. Hence, manufacturers are developing improved systems that can be customized according to proper mounting height and other dimensions. Manufacturers in the water free/waterless urinals market should also cater to the needs of end users in the commercial space, since the sector currently accounts for a high market share of ~93%.

Some of the key developments in the global water free/waterless urinals market are as follows:

Key indicators of market growth, which include value chain as well as supply chain analyses, and Compound Annual Growth Rate (CAGR), are elucidated in TMR’s study in a comprehensive manner. This data can help readers interpret the quantitative growth aspects of the global water free/waterless urinals market for the forecast period.

A unique research methodology has been utilized by TMR to conduct comprehensive research on the growth of the global water free/waterless urinals market, and arrive at conclusions on the future growth prospects of the market. This research methodology is a combination of primary and secondary research, which helps analysts warrant the accuracy and reliability of the drawn conclusions.

TMR’s study on the global water free/waterless urinals market includes information categorized into four sections ? by technology, by application, by distribution channel, and by region. Changing industry trends and other crucial market dynamics associated with these sections of the global water free/waterless urinals market have been discussed in detail.