Transparency Market Research has now come up with a new research report that provides a detailed information about the overall working dynamics of the global umbilical cord blood banking market. As per the findings of the research report, the global market was initially valued at US$3,124.4 Mn in 2016. The market is projected to showcase a highly promising CAGR of 11.4% over the given period of forecast ranging from 2017 to 2025. Given this rate of development, the valuation of the umbilical cord blood banking market is expected to rise up to US$8,178.1 Mn by the fall of 2025. 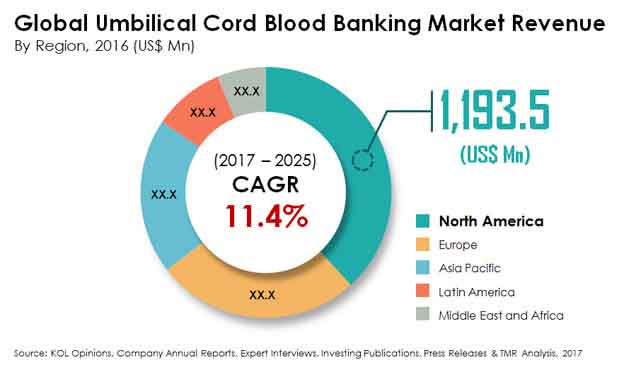 In spite of such huge costs, this segment of private cord blood banks has been dominant in the global market and are projected to remain so in the coming years of the forecast period. The segment is projected to witness an eye-catching CAGR of 12.5% for the given period of assessment. There is a wide range of factors that is helping to drive the growth of the segment. Some of the key driving factors are complete rights of ownership are with the donor, flexible sites for collection, and secured and assured access to one’s cells. Such factors provide significant advantage and glamor to the segment due to which more and more people are getting interested in donating umbilical cord blood in such institutes over public banks.

In terms of end user, the global umbilical cord blood banking is segmented into hospitals, pharmaceutical research, and research institutes.

Based on the geographical segmentation, the global umbilical cord blood banking market is segmented into five key regions. These regions are North America, Europe, Asia Pacific, Middle East and Africa, and Latin America. Of these, currently, the global market is being dominated by the regional segment of North America. The regional segment accounted for nearly 38.2% of the overall market share in 2016. The North America market is projected to witness a constant growth curve in the coming years of the forecast period. This growth of the market is mainly due to the growing demand for preserving cord blood for research and studies. The US market alone accounts for nearly 83.8% share of the entire North America market in 2016 then followed by Canada. Presence of a highly developed and well settled healthcare infrastructure is key for the market growth in the US.

On the other hand, the regional segment of Asia Pacific is expected to witness a promising rate of growth in the coming years of the forecast period with increasing demand from emerging economies. Increasing awareness, busting of long-held taboo, and overhaul of medical infrastructures in these countries are some of the key factors in driving regional growth.

Each of the market segments have been extensively analyzed based on the market related factors such as increasing adoption rate of umbilical cord blood banking and stem cell therapy, technological advancement, and growing number of use of stem cells therapy in various applications. Moreover, historical year-on-year growth have been taken into consideration while estimating the market size. The market size and forecast in terms of US$ million for each segment has been provided for the period from 2015 to 2025. The report also provides the compound annual growth rate (CAGR %) for each market segment for the forecast period from 2017 to 2025, considering 2016 as the base year.

The market overview section of the report explores the market dynamics such as drivers, restraints, and opportunities that currently have a strong impact on the Umbilical Cord Blood Banking Market and could influence the market in the near future. Market attractiveness analysis has been provided in the market overview section in order to explain the intensity of competition in the market across different geographies. The competitive scenario among different market players is evaluated through market share analysis in the competitive landscape section of the report. All these factors would help market players to take strategic decisions in order to strengthen their positions and expand their shares in the global Umbilical Cord Blood Banking Market.

Geographically, umbilical cord blood banking market has been segmented into five major regions: North America, Europe, Asia Pacific, Latin America, and Middle East & Africa. The market size and forecast for each of these regions has been provided for the period from 2015 to 2025, along with their respective CAGRs for the forecast period from 2017 to 2025, considering 2016 as the base year. The report also provides with market size and forecast for major countries in the respective regions. A detailed qualitative analysis of factors responsible for driving and restraining the market growth and future opportunities has been provided in the market overview section. This section of the report also provides with market attractiveness analysis, porter’s five forces analysis, and market share analysis by key players, thus presenting a thorough analysis of the overall competitive scenario in the global umbilical cord blood banking market.