Since its advent, laparoscopy, or minimally-invasive surgery, has changed the global operative landscape completely. Benefits that this procedure offers include minimization of trauma, quickened pace of recovery, and smaller incisions, all of which lead to better patient outcomes, which have significantly contributed to the growing popularity of laparoscopic procedures. This has, in turn, resulted in the growing demand for specialized equipment for minimally-invasive procedures, also including trocars. Trocars that are made particularly for use in laparoscopic surgeries have been gaining traction in recent years, making this the largest segment by value in the global trocars market. It was valued at ~US$ 390 Mn in 2018 and is expected to expand at a moderate pace to hit the ~US$ 560 Mn mark by the end of 2027.

Following closely is the general surgery application of trocars, which, in 2018, accounted for around one-fifth of the total share of the trocars market, and is anticipated to expand at a value CAGR of ~4% over the forecast period of 2019-2027. 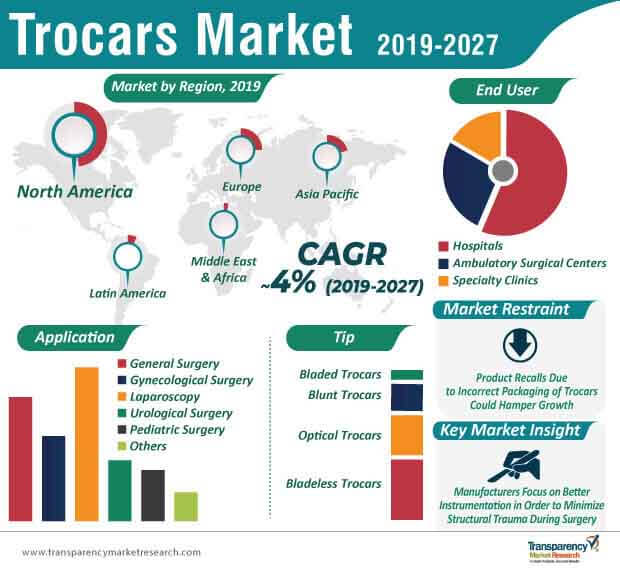 While high safety and hygiene standards in hospitals and other healthcare centers remain the most important aspect of the viability of the products used in these environments, the cost factor of disposable devices and the environmental aspect of reusable trocars are also being taken into consideration. Cost-effectiveness has become the focus of quality medical care in recent years, leading to the growing popularity of reusable trocars across several healthcare settings. In 2018, reusable trocars accounted for ~27% of the total market share - valued at ~US$ 350 Mn, a figure that is expected to grow 1.5X by the end of the forecast period.

However, while reusable and reposable trocars account for a prominent share in the global market, disposable trocars continue to remain popular. Accounting for around one-fourth of the total share of the trocars market in 2018, this segment is anticipated to expand at a moderate CAGR of 3.5% over the forecast period, to hit the ~US$ 630 Mn mark by the end of 2027.

Advancements in technology have led to product innovations, not just for improving the comfort of surgeons, but also improving the medical outcomes of surgeries. Innovations in recent times include trocars with valves that help control the leakage of fluid during the procedure. Manufacturers in the trocars market are looking to improve the mechanism of the implements as well, giving surgeons better control of the instruments. For instance, Fujifilm Healthcare, a major player in the global healthcare devices market, demonstrated the Fujifilm Demonstrates Interlock Trocar, an innovative tandem motion visualization device that allows the laparoscope and hand instrument to be controlled at the same time, with one hand.

With healthcare standards improving in developing countries, APAC is emerging as a lucrative market for medical devices and equipment, as diagnoses rates rise, leading to a surge in corrective procedures and surgeries in the region. This has had a positive influence on the growth of the trocars market in the region, which was valued at ~US$ 245 Mn in 2018, and is expected to grow to ~US$ 400 Mn by the end of 2027.

The most prominent regional market in the global trocars landscape is North America, which occupied ~40% of the total share of the market in 2018. While it is expected to expand at a rather sluggish pace of ~3% over the forecast period, it is still likely to remain the largest regional market, albeit with a reduced share of ~35% by the end of 2027. North America’s position at the top of the table, revenue-wise, can be attributed to the presence of several well-established players in the trocars market in the region, including Teleflex Incorporated, Cooper Surgical, Inc., CONMED Corporation, etc. 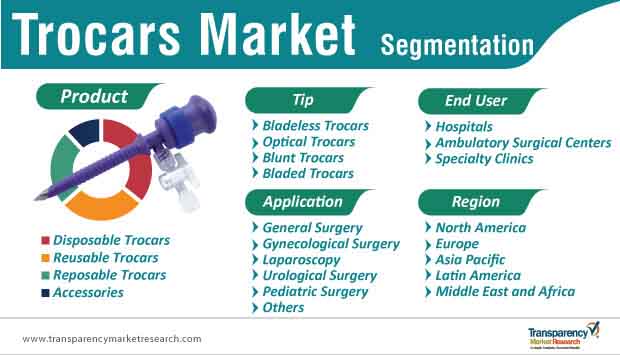 According to analysts at Transparency Market Research, the global trocars market is set to grow at a fairly modest pace of ~4% during the forecast period. There have been several technological advancements, including product innovations, such as the addition of valves and design changes, which have had a significant positive impact on the growth of the trocars market. Players in the global trocars market focusing on product development to improve ease-of-performance for surgeons, and also making procedures less invasive for patients, are likely to maximize gains over the forecast period.

With smaller instruments to be used in laparoscopic surgeries gaining popularity in the foreseeable future, especially with minimally-invasive procedures being offered as a norm, manufacturers looking at redesigning implements for easier insertion and smaller wound profiles are expected to gain a competitive edge in the global trocars market.

Rise in Demand of Minimally-invasive Surgeries: A Key Driver

Trocars Market – Scope of the Report

The report includes an elaborate executive summary, along with a snapshot of the growth behavior of various segments included in the scope of the study. Furthermore, the report sheds light on the changing competitive dynamics in the global trocars market. These indices serve as valuable tools for existing market players as well as for entities interested in entering the global trocars market.

A unique research methodology has been utilized by TMR to conduct comprehensive research on the growth of the global trocars market and arrive at conclusions on the future growth prospects of the market. This research methodology is a combination of primary and secondary research, which helps analysts warrant the accuracy and reliability of the drawn conclusions.

These primary and secondary sources have provided exclusive information during interviews, which serves as a validation from trocars market leaders. Access to an extensive internal repository and external proprietary databases allows this report to address specific details and questions about the global trocars market with accuracy. The study also uses the top-down approach to assess the numbers for each segment, and the bottom-up approach to counter-validate them. This has helped in reaching TMR’s estimates on the future prospects of the global trocars market more reliably and accurately.