Transdermal Scopolamine market is showing remarkable growth in healthcare owing to advantages offered by transdermal scopolamine. The skin patch helps prevent nausea and vomiting caused due to motion sickness by balancing norepinephrine and acetylcholine (hormones) in the body.

Increase in the incidence of cancer and surgeries is major driver of the transdermal scopolamine market. As transdermal scopolamine helps in recovery from anesthesia-induced as well as post-operative vomiting and nausea, the demand for transdermal scopolamine is increasing substantially around the globe. This demand accounts for market expansion at a CAGR of 6.70% between 2016 and 2024. As per the estimation by Transparency Market Research (TMR), the market value is projected to reach US$585.3 mn by the end of 2024.

The published report provides insights about the market growth. It offers detailed study of drivers and trends that will be contributing to the expansion of transdermal Scopolamine market in the duration of forecast period. The market intelligence report also gives description about the restraining factors that are likely to produce hindrance in the market.  Besides, it also highlight segments which will be contributing dominantly in growth of the market globally.

The medicine can be easily self-administered at home which makes it desirable among increasing geriatric population. Increasing in geriatric population across the globe is likely to drive transdermal scopolamine market globally. Also, there is no drug administration cost involved. 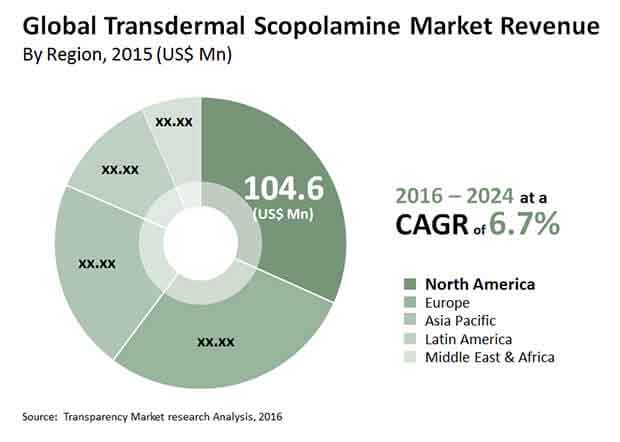 Among all the key players, Novartis AG alone contributed 41.0% of the global revenue in the year 2016. At the same time, Baxter International Inc. and GlaxoSmithKline Plc., accounted for 49% of the total share cumulatively. Presence of small companies are intensifying the competition in the market.

All things considered, rising mindfulness in the agricultural nations are boosting request and expected to offer worthwhile development openings. The higher creation from the little and mid-scale organizations working in creating areas is making development of the worldwide transdermal scopolamine market. Likewise, improving medical care area all around the world and blasting clinical the travel industry are offering the massive potential to these organizations for development.

The competition matrix section included in the report is likely to assist the existing players to increase their market shares and new companies to establish their presence in the global transdermal scopolamine market.

The global transdermal scopolamine market has been segmented as follows: