Tire-derived fuel (TDF) is fuel derived from all kinds of scrap tires. It may include whole tires or tires processed into uniform, flowable pieces that satisfy specifications of end-users. Industrial facilities across the world, including cement kilns, pulp and paper mills, and electric utilities, use TDF as a supplemental fuel to increase boiler efficiency, decrease air emissions, and lower costs.

Tire-derived Fuel is an Alternative to Other Solid Fuels

Fuel derived from waste tires, including altered, shredded, or whole tires, is known as tire-derived fuel (TDF). According to the U.S. Environmental Protection Agency (EPA), when burned, tires generate the same amount of energy as oil; 25%–50% more energy than coal, and 100%–200% more energy than wood. Moreover, the EPA and state-testing facilities have shown that TDF produces low emissions compared to other conventional fuels. At well-controlled facilities, emissions are considerably less when TDF is used to replace some of the typical fuels used at the facilities. As a result, the EPA has recommended the use of tire-derived fuel as a viable alternative to the use of fossil fuels. Hence, facilities such as utility boilers, cement kilns, and pulp & paper mills use TDF as a supplemental fuel in their energy-intensive processes. There are several other benefits of using tires as a fuel:

These factors are driving demand for tire-derived fuel. 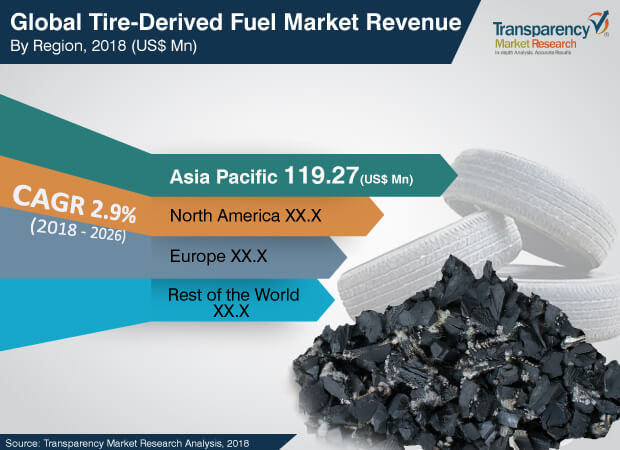 Around one billion scrap tires are generated and an additional four billion are stockpiled across the world every year. Tire landfills are undesirable, as they become breeding grounds for mosquitoes and other disease-carrying pests. It is also common for these landfills to catch fire and release thick toxic smoke. Moreover, the global tire industry is expected to expand rapidly in the near future, with Asia Pacific accounting a major share of the rise in demand in 2017. In certain developed economies, the end-of-life recovery rate for tires is normally high. However, this is not the case in developing countries in Asia, Africa, and the Middle East due to lack of infrastructure and minimal government regulations. According to the World Business Council for Sustainable Development, every year, the U.S. and the EU dump 14% and 16% of their scrap  tires into landfills, respectively, whereas more than 50% of tires go to landfills in Saudi Arabia, Russia, Ukraine, and Argentina. In Asia, end-of-life tires are routinely disposed off in landfills or by using other methods such as burning, which have a harsh impact on the environment. This low recovery rate in developing countries of Asia is likely to hamper the market in the region during the forecast period.

Increase in the Production of Automobiles

The global automotive industry is expanding at a rapid space, particularly in Asia Pacific. Government, corporate, and personal vehicles are increasing in number at levels much higher than ever before. Due to a large population, abundant availability of raw materials, and low cost of labor in Asia Pacific, several automobile giants are moving their manufacturing plants to the region. Furthermore, microeconomic development, effective and efficient vehicle-manufacturing techniques, and rise in the number of middle-class consumers are propelling vehicle sales. Additionally, rise in popularity of electric vehicles in North America and Europe provides a boost to vehicle sales. These factors are projected to result in an increase in the amount of scrap tires in the next few years. Several governments across the globe are using the concept of ‘Reduce, Reuse, and Recover’ (3R) for scrap tire management due to various advantages. Moreover, with fossil fuel prices increasing rapidly, the demand for cheap alternatives such as tire-derived fuel is on the rise. This is estimated to present growth opportunities to the tire-derived fuel market in the near future.

In July 2018, the largest resource recovery and processed engineered fuel (PEF) plant in Australia was opened at Wetherill Park in Sydney. Owned by a joint venture between ResourceCo and Cleanaway, the plant is licensed to receive up to 250,000 tons per year of dry commercial and industrial and mixed construction and demolition waste in order to recover metal, clean timber, and inert materials. The rest of the waste is converted into PEF. In February 2018, Renelux Cyprus Ltd. expanded its tire-derived fuel resources in Italy to meet the requirements of its new industrial clients in the Middle East and Far East. In July 2018, Scandinavia’s Enviro Systems AB and the Industrial Development and Renovation Organization of Iran (IDRO) signed a Heads of Agreement (HoA) with DHF Development, a Germany-based company, in order to facilitate the establishment of more recycling plants in the Middle East. In May 2017, The Clean Energy Finance Corporation (CEFC) lent US$ 30 Mn to ResourceCo for establishing an innovative plant for the production of alternative fuels in New South Wales (NSW), Australia. These funds would be used to build two new plants in order to transform selected non-recyclable waste streams into solid fuel known as processed engineered fuel (PEF). In May 2017, Renelux Cyprus Ltd. submitted its first full corporate offer for alternative fuels i.e. tire-derived fuels to a major cement manufacturer in India.

Asia Pacific is A key region of the tire-derived fuel market. It is expected to remain dominant during the forecast period, owing to a year-on-year increase in generation of new tires as well as scrap tires. Japan held a major share of the tire-derived fuel market in Asia Pacific in 2017. More than 80 million units of scrap tires are generated in Japan every year. However, demand for tire-derived fuel in India is projected to rise at a rapid pace during the forecast period. In India, more than 25 million vehicles were produced in FY 2016–17. Hence, the production of new tires is very high in the country.

Highly Competitive Market with the Dominance of Top Players

Tire-derived fuel (TDF) is fuel derived from all kinds of scrap tires. It may include whole tires or tires processed into uniform, flowable pieces that satisfy specifications of end-users. Scrap tires are an excellent source of fuel due to their high heat value. The heating value of an average sized passenger tire ranges between 13,000 Btu/lb and 15,000 Btu/lb compared to about 10,000 Btu/lb and 12,000 Btu/lb for coal. Another major reason for using tire fuels is to save fuel costs.

Tire-derived fuels offer several advantages over traditional fuels. Tires produce the same amount of energy as oil and 25% more energy than coal. The ash residues from TDF may contain a lower heavy metals content than some coals. TDF is less expensive than fossil fuels. The combustion of tires as fuel decreases the number of scrap tires disposed in landfills or stockpiles. TDF decreases the emissions of sulfur oxides (SOx) when used to replace high-sulfur coal in cement kilns.

The report includes a detailed value chain analysis, which provides a comprehensive view of the global tire-derived fuel market. Porter’s Five Forces model for the tire-derived fuel market has also been included to help understand the competitive landscape. The study encompasses market attractiveness analysis, wherein products and application are benchmarked based on their market size, growth rate, and general attractiveness.

The global tire-derived fuel market has been segmented as follows: