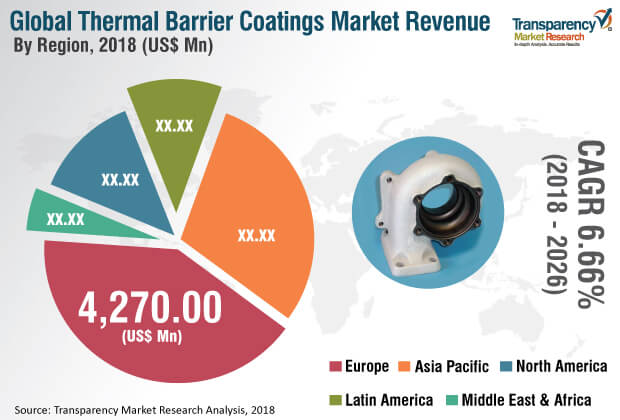 Major players engage in acquisitions and merges to develop and launch new products and establish new facilities. These strategies are likely to propel the thermal barrier coatings market during the forecast period. Praxair Surface Technologies, Inc. acquired packaged gas businesses in North and South America and obtained controlling interest of an equity investment in Asia, which amounted to US$ 82Mn in 2015. The company had acquisition totaling US$ 206 Mn in 2014. Thermal Spraying Technologies developed thermal sprayed coating solutions for some of the leading global manufacturers and expanded its facility in Sun Prairie, Wisconsin, the U.S. in 2014. Expansion of facilities helped the company increase workforce, thus allowing it to cater to the increasing demand for thermal barrier coatings from consumers.

Based on coating material, the thermal barrier coatings market has been divided into aluminum oxide, ceramic Yttria-stabilized zirconia (YSZ), MCrAlY, and others. Aluminum oxide is stable in a chemical environment and is an oxygen barrier. It is observed that the use of aluminum oxide than the YSZ coating decreases oxygen diffusivity and salt penetration. Ceramic YSZ coatings are widely used in turbine engines to protect the metal structure from the heat of combusted jet fuel. Ceramic YSZ coatings are also used in all new aircrafts. MCrAlY coatings are widely used as first and second coatings to prevent corrosion of turbine blades and nozzle guide vanes. In terms of application, the thermal barrier coatings market has been segregated into industrial, automotive, aerospace, and energy. The industrial segment holds a dominant share of the market. Automotive is an attractive segment of the market.

The report comprises a detailed value chain analysis, which provides a comprehensive view of the global thermal barrier coatings market. The Porter’s Five Forces model for the thermal barrier coatings market has also been included to help understand the competitive landscape in the market. The study encompasses market attractiveness analysis, wherein applications are benchmarked based on their market size, growth rate, and general attractiveness.

The Thermal Barrier Coatings Market has been segmented as follows