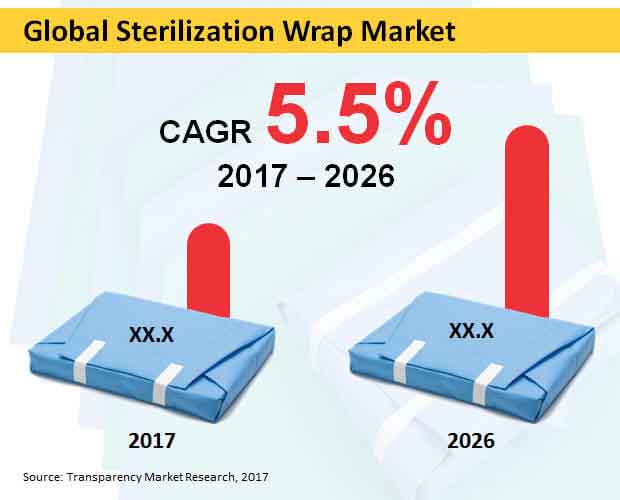 According to TMR, the global market for sterilization wrap is expected witness substantial growth during the period of assessment, 2017-2026. The global sterilization wrap market is estimated to reach a valuation of more than US$ 85 Mn by the end of the period of assessment (2026) and is expected to grow at a robust CAGR throughout the said period.

North America to be a Lucrative Region for Sterilization Wrap

Healthcare professionals across the globe are growing efforts to offer superior care for patients. One of such efforts is incorporation of technologically advanced tools such as sterilization wraps, which are used for the packing of surgical instruments. Many hospitals and clinics across the globe are adopting sterilization wraps as these products offer high protection to surgical instruments against contact contamination. Thus, increased demand for these wraps to achieve efficient infection control is likely to work as a key driver for the expansion of the global sterilization wrap market in the years ahead.

In recent few years, there is considerable growth in number of hospitals and clinics in all worldwide locations. Many developed as well as developing countries across the globe are rising the expenditure on their healthcare facilities. These factors are likely to fuel the expansion of global sterilization wrap market in the forthcoming years. This aside, many government bodies of many countries across the globe are employing stringent regulations regarding the safety of patients against infection-acquired infections as well as many other infectious diseases. All these factors are encouraging healthcare facilities for adoption of sterilization wraps.

Transparency Market Research has revealed various facts pertaining to sterilization wrap in its recently published research report on global sterilization wrap market. This research study is filled with incisive market insights and essential acumen and reflects various factors that have contributed to the growth of the global market. Along with the past market scenario, a glimpse of the future of the sterilization wrap market is also provided. The forecast analysis if for nine years, from 2017 to 2026. This can assist the reader in slating important strategies based on present market conditions to achieve expansion in the coming future.

Research study on sterilization wrap market puts forth a global 3600 perspective. Main geographies across the entire globe are assessed and the trends, developments, opportunities, drivers and challenges in each region and sub region that have an influence over the growth of the market in the respective region are studied to get a clear picture of the global sterilization wrap market. Revenue pockets can be derived with such kind of intense market intelligence which is unbiased in nature and purely market centric thus portraying a global perspective in front of the reader.

Transparency Market Research follows a one of a kind research methodology to glean vital and relevant market insights. This research process ensures delivery of statistical data without errors, thus maximizing the accuracy of the research report. Secondary research in combination with primary research gives a clear market understanding based on which key players, market observers and opinion leaders are interviewed to check the reliability of the data and to add other facets of the market. The uniqueness of this research process is the revalidation and re-evaluation of the data that takes place at each step during each interview and is continued till the conclusion of the market research. Based on these vital acumen, key analysis can be drawn and recommendations from domain experts are included in this intelligence report. The multiple cross checking of the data ensures a highly accurate market scenario which can be directly used by the reader to chalk informed decisions.

The research report on global sterilization wrap market covers analysis on key companies dealing with sterilization wrap. Various aspects such as SWOT analysis, key developments, innovations, product portfolio, financials and company overview are included in this section of the report. The reader can gain intelligence on the major players that have a good hold in the market, based on which new strategies can be devised to gain an edge on the competition.

The weighted market analysis on global sterilization wrap market delivers value to the reader by providing drinkable insights, ready to use statistical analysis and recommendations without biasness in order to plan future expansion strategies and also to gain stability in the changing dynamics of the global market.

The global research report on sterilization wrap market includes an in-depth analysis on each segment of the market. The market segmentation covers product type, end user, sales channel and regions.