The global steam autoclave market is extremely consolidated and intensely competitive. The presence of a very small number of companies commanding a vast share in the global market has rendered the market difficult to penetrate for new companies. Despite this fact, the market presents promising growth opportunities for companies introducing technologically advanced products, a trend evident from the high consumption of products based on E-beam and gamma irradiation technologies in the past few years.

The vast rise in the global demand for steam autoclaves in the past few years can be attributed to the increased prevalence of a number of infectious diseases, a huge surge in surgical procedures, and an alarming rise in the numbers of hospital-acquired infections. Rising demand for improving healthcare services across developing regional markets such as Asia Pacific, owing majorly to rising healthcare expenditures and an expanding base of geriatric population.

North America emerged as the clear leader in the global steam autoclave market in 2015, accounting for a nearly 40% share in the market’s overall revenue. Estimates suggest that in U.S. alone in the region, nearly 5 million endoscopies and about 46.5 million surgeries are undertaken every year. The severity of hospital-acquired infections in the country can be estimated from the fact that nearly 8.3 patients out of every 1,000 patients admitted in New York state hospitals in 2012 acquired hospital-onset Clostridium difficile infections (CDI). The numbers are rising at an alarming pace.

These factors have collectively influenced the increased adoption of effective sanitization practices and devices in healthcare settings in North America. Strict rules aimed at enhanced safety of patients at healthcare facilities is also a major factor influencing the increased adoption of steam autoclaves in Europe, the second-largest steam autoclave regional market in 2015. 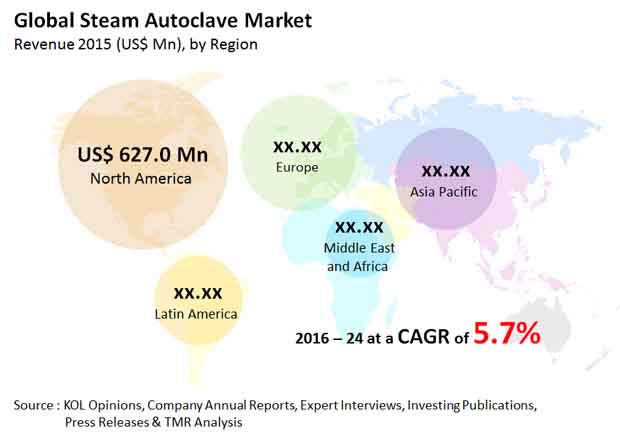 The high prevalence of infectious diseases, a vast and alarmingly rising population base of geriatric people in Asia Pacific are expected to help the steam autoclave develop on a promising scale in the region in the next few years. The rising demand for high-quality healthcare services from the increasingly affluent consumer base will stimulate the improvement of healthcare infrastructure in countries such as India, China, and parts of Latin America, further driving the market.

The prominence of these product types can be attributed to their extensive usage in almost all major application areas such as pharmaceutical laboratories and medical devices. Additionally, traditional steam autoclaves are also considered highly efficient for sterilizing a large number of medical devices at the same time, making them more practical in large medical setups.

The global demand for steam autoclaves is increasing and the main reason behind this is the growing incidences of infectious diseases and a staggering surge in the number of cases of hospital-acquired infections. The spread of infectious diseases has also led to a demand for improvement in the healthcare services in developing nations of Asia Pacific. The growing geriatric population and growing healthcare expenditure in this region will help bolster the demand for steam autoclave market.

The affluent population base is increasingly demanding high quality healthcare services and this will stimulate the growth of the global steam autoclave market in the coming years. The healthcare infrastructure requires improvement in parts of Latin America and Asian countries such as China and India. This will provide ample growth opportunities for the steam autoclave market in these parts of the world.

On the basis of geography, North America is leading in the steam autoclave market and is expected to continue to do so in the coming years. Europe will trail after North America in terms of leading regional market. Strict rules for the safety of patients at healthcare organizations will lead to a heightened adoption of steam autoclaves in Europe. With a CAGR of 7.9% CAGR from 2016 to 2024, it will be Asia Pacific to witness the fastest growth in the coming years, followed by Latin America, which is estimated to expand at a 6.9% during the same period.

Highly competitive and consolidated are two characteristics that describe the global steam autoclave market correctly. The leading companies account a major share of the market, making it very difficult for new players to enter the market. The top three companies, STERIS, Getinge Group, and Johnson & Johnson accounted for a share of over 70% in 2015. Some of the other players within the market are: Other prominent vendors in the market include Matachana Group, CISA Group, Belimed Group, SAKURA SI CO., LTD., and 3M Health Care. Great growth opportunities of growth lie for companies introducing innovative and technologically advanced products. This has been proven by the high success of products based on the use of technologies such as E-beam and gamma irradiation.

For the purpose of this study, the market has been segmented as follows: