Fuel cells can be utilized as primary propulsion power, backup, or combined heat and power source (CHP) for fixed applications. Fixed fuel cells can be estimated to control anything from a solitary family home to a huge business place, which implies they bode well for a wide scope of business sectors including retail, server farms, private, media communications, and some more. Energy components for fixed applications contrast from versatile and car applications in the decision of power module, fuel, and the warming and cooling of the stacks. An assortment of fixed energy component power frameworks have been created to take into account the developing interest for power supply. Owing to this growing demand, the global stationary fuel cells market is projected to grow exponentially in coming years.

Stationary fuel cells are being used extensively for commercial, industrial, and even residential purposes, as they provide clean power that is not connected to the grid. The low-emission factor, coupled with lower efficiency losses during transmission, in comparison to other clean technologies, contributes to their rising popularity. One of the most promising technologies that is currently being used for stationary and portable applications is proton exchange membrane fuel cells, which use water-based acidic polymer membranes as electrolytes. They are highly efficient, non-polluting power sources, and accounted for around half of the total share of the stationary fuel cell market by volume in 2018. The segment is expected to expand more than 3X by the end of the forecast period in 2027, to hit the ~105 thousand units mark.

However, for use in stationary applications, solid oxide fuel cells are also fast gaining popularity.  These contain solid oxides or ceramic electrolytes, which are far more stable and offer higher efficiency at relatively lower costs, contributing to their rising popularity as a fuel cell of preference for end users in the stationary fuel cell market. By value, they accounted for ~50% of the total share of the stationary fuel cell market in 2018, and this share is expected to expand at a value CAGR of ~13% over the forecast period, from 2019 to 2027. 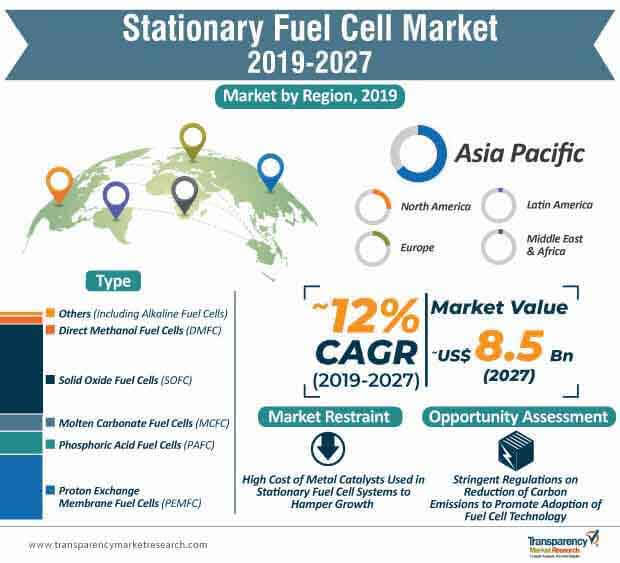 Stationary fuel cells have found application in various sectors for primary as well as back-up power generation, and are generally based on combined heat and power (CHP) technology for both, heated water and air. They are being used to power a range of products, from individual computers to smaller single-family homes in residential applications, stores, buildings, and larger structures in the commercial sphere, and even data centers and power plants in the industrial sector.

However, the most prominent end user of the stationary fuel cell market in 2018 was the commercial sector, accounting for over half of the total share by value. It is anticipated that this segment is likely to expand at a CAGR of ~12% by revenue over the forecast period, and is estimated to be valued at ~US$ 4.4 Bn by the end of 2027. The myriad of benefits that stationary fuel cells offer, such as low emissions, reduced noise production, and requirement of less space, make them highly popular in the commercial sector, which has had a positive impact on the growth of the stationary fuel cell market as a whole.

Stationary fuel cells, which are increasingly replacing conventional power sources such as internal combustion engines and batteries, are considered more advantageous in various respects. The benefits of fuel cell include higher efficiency in comparison to conventional fuels, making it their biggest advantage over conventional fuels. They also generate less noise when compared to internal combustion engines, making them more suitable for commercial settings such as hospitals. Fuel cells run on renewable energy and eliminate the emission of greenhouse gases, which contributes greatly to their popularity around the world.

Fuel cells are also comparatively easier to maintain over their conventional fuel counterparts, owing to a fewer number of moving parts, also promoting their popularity in recent years. It is also a step forward in the global economy perspective, as they do not require fossil fuels and conventional sources of energy to produce electricity. This also reduces dependency on oil-producing countries, promoting energy security in the long run.

As an efficient provider of power, stationary fuel cells have been gaining traction in recent years, and are expected to continue on a similar vein until the end of the forecast period. However, in portable applications, particularly cars, fuel cells have faced criticism on several fronts, including viability, high costs of raw materials, and lack of commercial scalability. 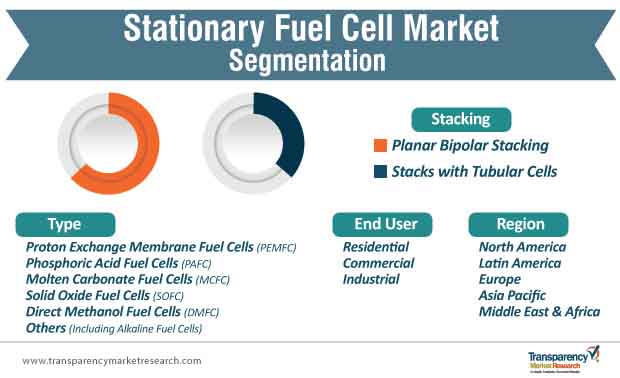 Stuck in a neck-to-neck competition with other brands? Request a custom report on “Stationary Fuel Cell Market”

The global stationary fuel cell market is set to grow at a robust pace over the forecast period of 2019 - 2027, as high efficiency and minimal-to-zero emission of GHG are being targeted globally, leading to stationary fuel cells gaining traction in commercial and industrial sectors. According to analysts at Transparency Market Research, manufacturers targeting their R&D towards lightweight and compact materials for solid fuel cell systems, for better product efficacy, are likely to maximize their gains during the forecast period.

The regional markets of APAC and North America collectively held more than three-fourth of the total share of the global stationary fuel cell market in 2018. These markets are expected to continue to remain lucrative during the forecast period, due to the demand for clean electricity rising from these regions at a faster rate than other regions, coupled with the requirement to align with global clean electricity goals, which has led to a rise in the adoption of stationary fuel cells. Manufacturers looking to strengthen their presence in these markets by reinforcing their distribution channels are likely to have bright prospects in the foreseeable future.

​These companies are actively engaged in expansions, mergers & acquisitions, and joint ventures in order to maintain their share in the global stationary fuel cell market.

This study covers a detailed segmentation of the stationary fuel cell market, along with key information and a competitive outlook. The report mentions the company profiles of key players that are currently dominating the stationary fuel cell market, wherein, various development, expansion, and winning strategies practiced and executed by leading players have been presented in detail.

The report provides detailed information about the stationary fuel cell market on the basis of comprehensive research on various factors that are playing a key role in accelerating the growth potential of the market. Information mentioned in the report answers path-breaking questions for companies that are currently functioning in the market and are looking for innovative ways to create a unique benchmark in the stationary fuel cell market, so as to help them make successful strategies and take target-driven decisions.

The research methodology adopted by analysts for combining the stationary fuel cell market report is based on detailed primary as well as secondary research. With the help of in-depth insights of the industry-affiliated information that is obtained and legitimated by market-admissible resources, analysts have offered riveting observations and authentic forecasts of the stationary fuel cell market.

During the primary research phase, analysts interviewed industry stakeholders, investors, brand managers, vice presidents, and sales and marketing managers. On the basis of data obtained through the interviews of genuine resources, analysts have emphasized the changing scenario of the stationary fuel cell market.