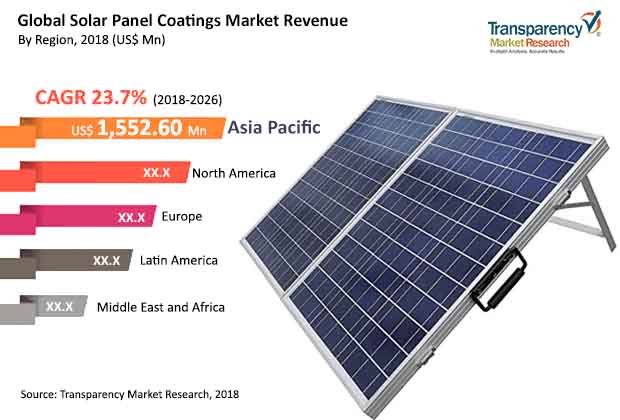 The anti-reflective segment is estimated to expand at a rapid pace during the forecast period, as these coatings enhance the absorption capacity; improve light transitivity; and reduce the reflection, thereby improving the overall efficiency of solar panels. This, in turn, drives the demand for anti-reflective solar panel coatings. Anti-reflective solar panel coatings are widely applied in end-use industries such as residential, commercial, energy, agriculture, automotive, and others (solar cells, electronic devices, etc.). The hydrophobic segment is projected to witness considerable demand in the next few years, for use in solar panel installations at areas of high elevations. Excellent ability of hydrophobic coatings does not allow the water to stay on the surface of solar panels. These properties are projected to fuel the hydrophobic segment during the forecast period.

The report comprises a detailed value chain analysis, which provides a comprehensive view of the global solar panel coatings market. The Porter’s Five Forces model for the solar panel coatings market has also been included to help understand the competition landscape in the market. The study encompasses market attractiveness analysis, wherein application segments have been benchmarked based on their market size, growth rate, and general attractiveness.

Market players have been profiled in terms of attributes such as company overview, financial overview, business strategies, and recent developments.

The Solar Panel Coatings Market has been segmented as follows –