Manufacturers in the market are increasingly looking to meet this growing demand from the mining industry by expanding their production facilities. For instance, in 2018, Cyanco announced the expansion of its manufacturing plant in Nevada, USA, for the continuous supply of sodium cyanide around the world.

Of the other end users of sodium cyanide, the chemical industry, which held a smaller share of ~8% of the total global market value in 2018, is expected to grow the fastest at an average of ~5% over the forecast period.  This can be attributed to the application of sodium cyanide for specific tasks such as electroplating and insecticides, and also as a precursor to several other compounds used in pharmaceuticals. The expected average growth indicates the presence of untapped opportunities for manufacturers in the sodium cyanide market to capitalise during the forecast years. 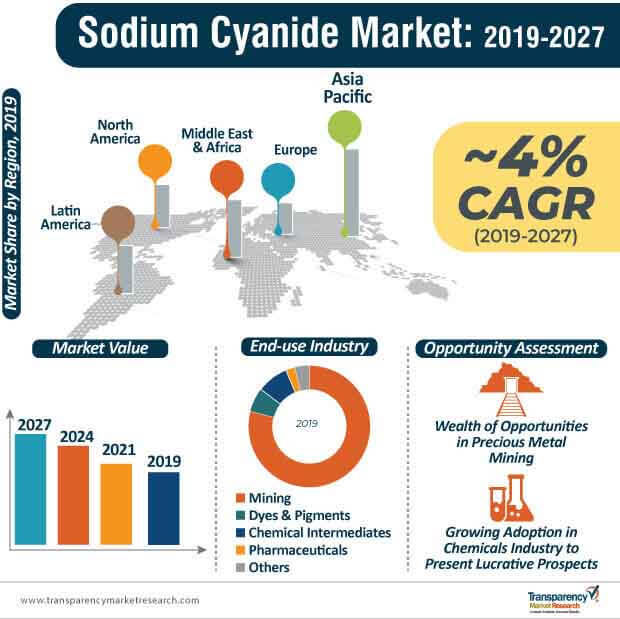 While it is rampantly employed across the mining industry, the use of sodium cyanide has been increasingly garnering attention in recent years due to the adverse effects it has on the environment. Sodium cyanide itself breaks down rapidly in water; however, the compounds it breaks down into can pose a great danger to the wildlife and humans in the area. This is particularly significant in the case of sodium cyanide spills into groundwater sources, which can cause widespread contamination that persists for long periods of time. For instance, the 2000 Baia Mare cyanide spill in Romania has been touted as one of the worst environmental disasters in Europe in recent times, which endangered human and wildlife across Hungary, Serbia, and Romania.

The occurrence of sodium cyanide spills due in mining, which can have a negative impact on the environment, can restrain the potential growth of the sodium cyanide market.

The global sodium cyanide market is a consolidated landscape, with a small number of large-scale manufacturers holding a large share of the market, and numerous small- and medium-sized players vying for the rest of the pie of the market share. In 2018, established manufacturers in the market - Cyanco, Chemours, Orica Limited, Evonik Industries AG, and Australian Gold Reagents Pty Ltd. held ~70% share of the market. They are looking at establishing themselves as reliable players in the market, and are increasingly focusing on strengthening their distribution channels in regional markets as well. For instance, in May 2018, Australian Gold Reagents appointed Qube Bulk as its integrated provider of logistic services, covering the West Australian sodium cyanide supply chain from beginning to end. 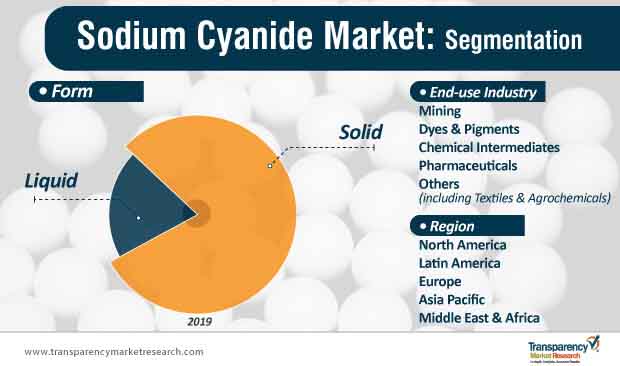 Looking for Regional Analysis or Competitive Landscape in Sodium Cyanide Market, ask for a customized report

The global sodium cyanide market is set to grow rather modestly during the forecast period, primarily due to unabated demand from the mining industry. According to analysts at Transparency Market Research, manufacturers should invest into making regional and global sodium cyanide supply chains reliable for maximum gains in the foreseeable future. Players should also turn their attention toward the rapidly rising demand from the chemical industry, and focus on customising their products based on related requirements.

Although there is a possibility of the adverse environmental impact of improperly stored sodium cyanide, which can negatively impact the growth of the market, stakeholders are becoming increasingly responsible with its storage, transport, and handling. This is likely to shape the evolution of the landscape quite positively in the foreseeable future.

A latest study collated and published by Transparency Market Research (TMR) analyzes the historical and present-day scenario of the global sodium cyanide market, to accurately gauge its potential development. The study presents detailed information about the important growth factors, restraints, and key trends that are creating the landscape for the future growth of the sodium cyanide market, to identify the opportunistic avenues of the business potential for stakeholders. The report also provides insightful information about how the sodium cyanide market will progress during the forecast period of 2019-2027.

This study covers a detailed segmentation of the sodium cyanide market, along with key information and a competitive outlook. The report mentions the company profiles of key players that are currently dominating the sodium cyanide market, wherein, various development, expansion, and winning strategies practiced and executed by leading players have been presented in detail.

The report provides detailed information about the sodium cyanide market on the basis of comprehensive research on the various factors that are playing a key role in accelerating the growth potential of the market. Information mentioned in the report answers path-breaking questions for companies that are currently functioning in the market and are looking for innovative ways to create a unique benchmark in the sodium cyanide industry, so as to help them make successful strategies and take target-driven decisions.

The research methodology adopted by analysts for combining the sodium cyanide market report is based on detailed primary as well as secondary research. With the help of in-depth insights of the industry-affiliated information that is obtained and legitimated by market-admissible resources, analysts have offered riveting observations and authentic forecasts of the sodium cyanide market.

During the primary research phase, analysts interviewed industry stakeholders, investors, brand managers, vice presidents, and sales and marketing managers. Based on data obtained through the interviews of genuine resources, analysts have emphasized the changing scenario of the sodium cyanide market.