Wearable technology refers to those portable smart gadgets that can be around a body. Wearables comprise gadgets like smart jewelry like Ringly, smart glasses like Google glass, and smart watches. Smart electronic devices comprise fashion electronics, tech togs, smart wearable technologies, and many other such gadgets that can be worn as clothing or as accessories or implants. The global smart wearables market is likely to witness immense growth over the tenure of assessment due to growing popularity of these gadgets.

Technological Advancement to Shoot up Demand in the Near Future

Advancements in research and development work have led to the augmented innovation in the last few years. It has triggered developments in the global smart wearables market. Research and development activities has led to the advent of new categories of product such as hearables, smart fabrics and others that integrate advanced design and technology in the daily lives of people. Of late, there has been an emphasis on offering aesthetic designs to draw the attention of customers.

Smart wearables could also include things like wristbands introduced by companies like Apple Inc., Fitbit, and Jawbone. These wristbands also act as activity trackers and have gained immense popularity, mostly amongst the younger generation. Such popularity of these products is mostly due to the increased awareness about fitness and health. Smart wearable come in the following forms

Of all of these products, smartwatches are witnessing a spiral growth in its demand due to various additional features and these watches are becoming more of an everyday wear. Prominent brands like Fossil and Apple have kept the pricing consistent and in line with the traditional watches in a bid to maintain their revenue. With the advent of Google WearOS, many of the luxury premium makers of watches, such as Armani and TAG Heuer, are also entering the market. This factor is likely to encourage growth of the global smart wearables market in the years to come.

Advancements in technology have driven innovations in the consumer electronics sector and as per the current observable trends, smart wearables are expected to disrupt consumer trends in the near future. While consumer demand for smart wearables is anticipated to scale new heights, the adoption of the wearable technology across a range of industries is expected to witness considerable growth. Cost reduction, modernization of business operations, real-time monitoring, efficient inspection of industrial equipment, and improving workforce safety are some of the key areas in which deployment of smart wearables is likely to take place. 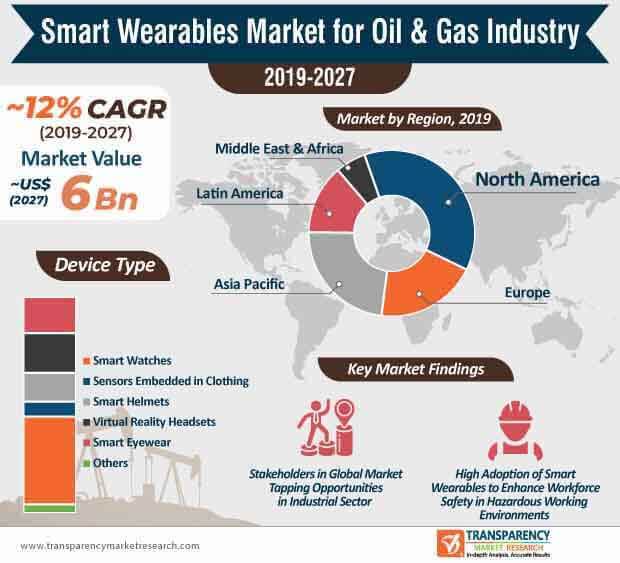 Apart from providing an impetus for productivity, wearable devices will play a pivotal role in streamlining the delivery of documents and data in real-time. With rapid advancements in technology, a wide range of smart wearables is available for applications in the oil & gas sector. Based on device type, the smartwatch device type segment is estimated to generate high revenues and account for ~ 41% share of the smart wearables market for oil & gas industry.

Advancements in Internet of Things (IoT) to Augment Demand

While oil and gas companies continue to focus on the adoption of digital technologies, developments in the Internet of Things (IoT) space have come at the right time. The gradual penetration of IoT in the oil & gas sector is expected to boost the growth of the smart wearables market for oil & gas industry during the assessment period. By leveraging IoT, oil and gas companies are expected to lean toward automating and optimizing various processes that were time-consuming. With growing emphasis on workforce safety across the oil & gas sector, companies are required to comply with stringent regulations and regulatory norms. The deployment of IoT will play a critical role in improving the safety of personnel working in hostile environments. Connected sensors, remote sensors, and drones connected to smart wearables will soon gain significant popularity in the smart wearables market for oil & gas industry.

While improving workforce safety will remain a key area of interest, asset monitoring, asset management, and tracking, and predicting maintenance cycles of equipment are some of the other areas where smart wearables could make a significant impact in the oil & gas sector. 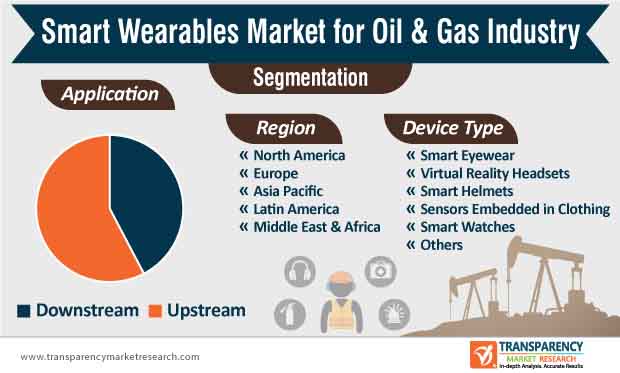 Stuck in a neck-to-neck competition with other brands? Request a custom report on Smart Wearables Market for Oil & Gas Industry