The growth of disposable income generally improves quality of life and fuels the demand for chilled and frozen food and beverages. Such demand is also affected by changes in consumer habits. Improvements in the standard of living allow more people to eat out. This trend is reinforced by an increase in the number of restaurant chains and the rapid expansion of fast-food networks around the world, particularly in India, China, South East Asia, and Japan. These trends positively affect demand for commercial refrigeration equipment used for the conservation of food and beverage. Over and above the demand generated by the opening of new sales outlets, commercial refrigerators are used as displays, or ice cold merchandisers (ICMs) that offer a platform for visual communication and merchandising, thereby promoting impulse buying and facilitating brand recall. The concentration of populations in major urban centers and the increased participation of women in the labor market contributes to changes in eating habits. One such change is the higher consumption of frozen foods and refrigerated drinks.

Based on the capacity range, the SEA freezer and beverage cooler market is segmented into 500 & above litres, 300 to 500 litres, 200 to 300 litres, and 200 and below litres. The growth of the service and hospitality sectors, including food chains, restaurants, and the tourism industry, as well as a change in consumer habits have led to a rise in the storage of frozen food and food-related products. In order to accommodate increased consumer demand, c-store owners, supermarkets, and other point-of-sale outlets are pitching for higher-capacity freezers, leading to a shift from traditional 200 & below liters to 300 to 500 liters and 500 & above liters capacities. The different door types for beverage coolers are categorized as 4 doors & above, 3 doors, 2 doors, and 1 door. Pubs, bars, and HORECA choose best-fit wine coolers in order to fulfill their requirements, basing their choices on factors such as space  and quantity/capacity to hold wines/alcoholic beverages, in order to effectively cater to consumers, including tourists, expatriates, and locals in SEA. At approximately 58%, the beverage coolers segment held the largest market share of the overall SEA beverage cooler market. 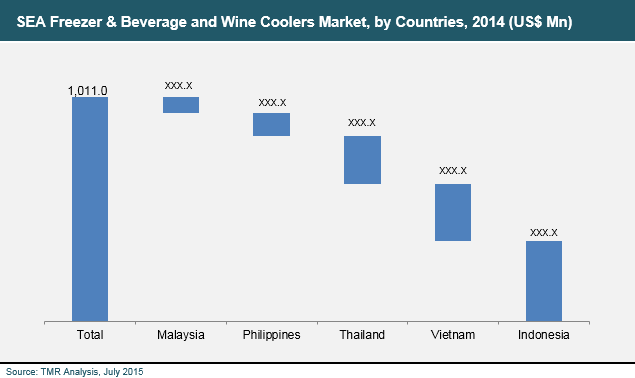 The SEA Freezers and Beverage & Wine Coolers market has been segmented as follows: