The oil and natural gas industry in Russia accounts for the majority of the country’s GDP and export earnings and the performance of this sector directly impacts the market for reciprocating compressors in Russia.

The Russian oil and natural gas sector boasts of the increased presence of blue chip companies. This has substantially raised the demand for equipment that is directly or indirectly involved in subsea applications in exploration and production (E&P) practices. Subsequently, the Russia market for reciprocating compressors has received a significant boost. The market is projected to rise from a value of US$227.1 mn in 2015 to reach US$352.6 mn by 2024. If these values hold true, the reciprocating compressors market is forecast to expand at a CAGR of 4.9% from 2016 to 2024.

Local manufacturers of reciprocating compressors in Russia have faced numerous hurdles owing to the lack of sustainability to cope up with international standards and quality benchmarks. Furthermore, the fragile political scenario has resulted in a significantly lower demand from local compressor manufacturers.

Transparency Market Research states that the reciprocating compressors market in Russia is anticipated to pick up pace only if manufacturers across the globe advance their technological innovations and develop maintenance-free compressors with greater efficiency. 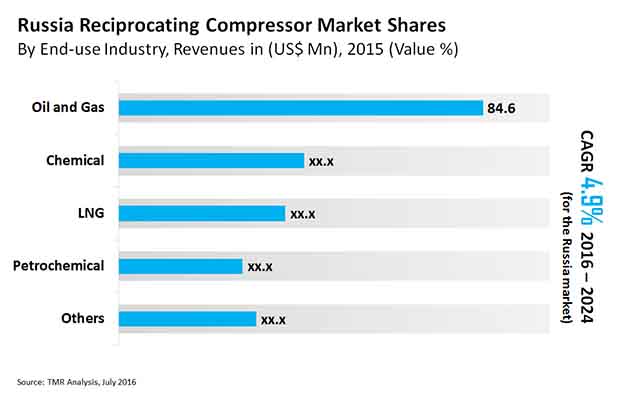 The oil and gas industry is by far the leading end user of reciprocating compressors in Russia and the share of this segment is pegged to be over 42% by 2024. This sector is also anticipated to register the highest CAGR during the forecast period – a healthy 6.4% from 2016 to 2024. However, the oil and gas sector in Russia has been facing a storm of challenges mainly due to the stagnant European market, expensive Asian projects, and strict Western sanctions. This has resulted in limited investments and innovations within key technological segments of the oil and gas industry.

The LNG industrial sector has been identified as highly opportunistic by Transparency Market Research. On the other hand, end users such as chemical, petrochemicals, industrial metallic tools, and metal processing are predicted to register mediocre growth over the course of the forecast period.

Reciprocating compressor market in Russia is anticipated to expand at a significant pace, led by the presence of large number of oil reservoirs and refineries. Growth factors such as rise in oil prices and some key initiatives by the Ministry of Industry and Trade of the Russian Federation and Association of Compressors have further supported the market growth of reciprocating compressors in Russia. The overall market is anticipated to reach US$ 352.6 Mn by 2024 expanding at a CAGR of 4.9% from 2016 to 2024.

The Russia reciprocating compressor market is segmented as below: